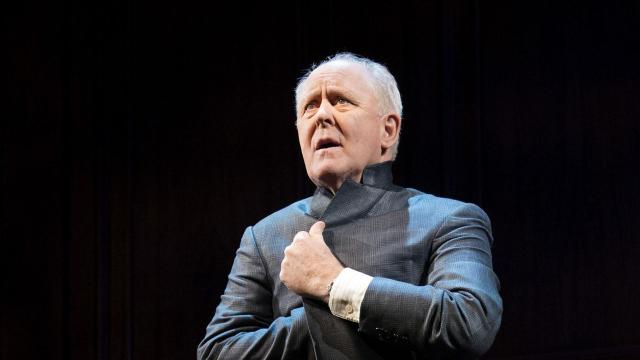 The only thing making noise onstage during John Lithgow’s “Stories by Heart,” which opened Thursday evening at the American Airlines Theater, is Lithgow himself. Reciting Ring Lardner’s 1925 short story “Haircut,” set in a small-town barbershop in the Midwest, he brings an anthropologist’s specificity (and a Foley artist’s ingenuity) to every swoop of the apron and slap of the pomade that accompanies the main character’s monologue.

So, to begin with, give Lithgow a sound effects award.

And then give him one for spiritual effects, because “Stories by Heart” is delightful: illuminating the stories, uplifting us.

I have to admit I didn’t expect to enjoy such an old-fashioned show; delight, illumination and uplift feel like debased currencies in 2018, purchasing nothing. Furthermore, I knew that Lithgow had been performing “Stories by Heart” for 10 years. A one-act version was first staged in 2008 at Lincoln Center Theater; since then he has brought it to some 35 cities while “leading the life of a time-warp vaudevillian.”

That was just what worried me: the possibility of past-its-prime ham. (Lithgow has never been uncomfortable with the grand style.) “Stories by Heart” seemed to be the kind of quick and cheap show that a theater company, in this case the Roundabout, mounts when there’s a hole in its schedule or budget. (The production, directed by Daniel Sullivan, is luxurious only in Kenneth Posner’s lighting.) Besides, who needs the equivalent of a bedtime fairy tale on Broadway when you can have your phone read you “Moby-Dick” on the subway?

Though golden enough for any nostalgist, “Stories by Heart” is neither soporific nor cute. For starters, the two stories that Lithgow recites — “Haircut” in the first act and P.G. Wodehouse’s “Uncle Fred Flits By” in the second — are superb, outlandish and, in very different ways, hair-raising.

You wouldn’t guess that from the opening of “Haircut,” in which a professionally logorrheic barber entertains a new customer with tales of life in his two-bit town. There’s this practical joker, you see, and this gal who won’t give him the time of day and this doctor she likes and so on. But the story soon asserts itself, or rather insinuates itself, as a scathing indictment of good-old-boy-ism: the barely civilized tradition of men playing tricks on one another and arranging nasty traps (including marriage) for women.

That’s all in the Lardner, but Lithgow adds another emotional channel by showing us how the barber, himself a good old boy, is implicated in the nastiness he pretends only to describe. An astonishing collection of laughs — whinnies, giggles, squeals, snorts, heaves — gradually colors the narrative, until this seemingly harmless man becomes, in effect, not just a witness to savagery, but also an accessory.

The seemingly harmless man I mean is the one in Lardner’s story, but the same thought applies to the quite real man who plays him. The ease with which Lithgow inhabits the character, merely untucking his shirt to suggest a barber’s smock, hints at the way all effective storytellers are complicit in their stories.

So there is a touch of pathos in learning, from Lithgow’s personal patter, that he first got to know “Haircut” when his father read it to him and his siblings during their peripatetic childhood. Arthur Lithgow, himself a man of the theater, with a “plummy voice and husky smell,” spent his life teaching and acting and opening Shakespeare festivals around the Midwest, moving often to stay one step ahead of ruination.

With however much love the younger Lithgow daubs the memory — and “Stories by Heart” is in essence a son’s tribute — he cannot quite overpaint the other colors of that exciting life, just as the barber cannot help revealing more than he intends.

And then in the second act, as the fiction gets lighter, the memoir gets darker. We now learn more about Arthur Lithgow at the end of his life, when depression almost completed the job disease had started. Seeking to raise Arthur’s spirits as he hovered on the threshold of his final illness (he died in 2004), John Lithgow started reading aloud to his father the same stories his father had once read aloud to him.

The one that turned the key to the elder Lithgow’s mood was the Wodehouse, and if it doesn’t turn the key to yours, you are not susceptible to British literary humor. Like all of Wodehouse’s best tales, “Uncle Fred Flits By” is utter nonsense, a tightly plotted farce made of thin air.

In this one, the first of a series published from 1935 to 1961, readers are introduced to a nervous Londoner named Pongo Twistleton, whose orderly life is disarrayed by the visit of his peremptory and mischievous uncle Fred from the country. A day trip to Fred’s ancestral home — now a suburban development of semidetached houses — leads to all kinds of impostures and adventures involving an unhappy young woman, her disapproving parents, her “pink” fiancé and a conspiratorial parrot.

Wodehouse isn’t as easy to read aloud as Lardner, but Lithgow takes a great deal of pleasure in mapping sentences whose verbs are barely in earshot of their subjects. And he revels in Dadaist assemblages like this one: “I know if someone came to me and said ‘Jelly this eel!’ I should be nonplused.” Yet the Wodehouse, for all its airy wit, is not about nothing: It too is a story of deception, only in this case the kind that delivers delicious comeuppance to the puffed-up and slow-witted.

And what could feel more current, more worthwhile, in the first cold days of 2018 than that? The imagination, Lithgow wants us to know, is a powerful weapon if we don’t let it go dull.