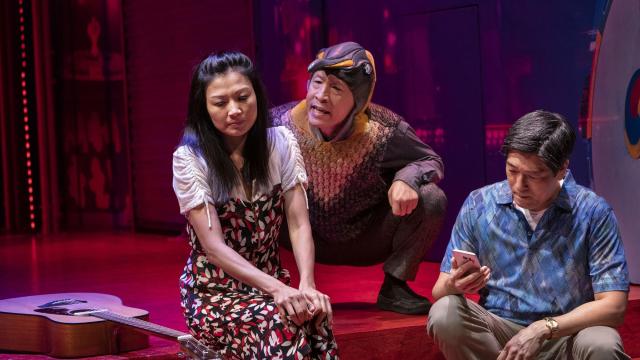 NEW YORK — Though they more or less speak the same language, Guk Minsung and Yoo Nanhee often don’t understand each other, especially in moments of attempted levity. “Is that a joke?” one will ask the other, sometimes with a postscript: “A South Korean joke?” or “A North Korean joke?”

Even the language of physical attraction seems to be less universal than they might have expected. “Is it sexy to apologize during sex in North Korea?” Minsung (Peter Kim) asks Nanhee (Michelle Krusiec) after a coital encounter in Hansol Jung’s “Wild Goose Dreams,” which opened Wednesday at the Public Theater.

Such are the difficulties of conducting an affair when its participants come from opposite parts of a divided peninsula. And differences of geographical origin are just the start of the complexities that besiege Minsung and Nanhee in this overwhelming play about being overwhelmed in a very confusing century.

Our leading lovers (though they might question being so described) are also both citizens of a vast global nation in which instant communication has never seemed easier or more impossible. They belong to the all-embracing culture of the internet, which for them turns out to be a confounding Tower of Babel.

Directed by Leigh Silverman (“Well,” “Chinglish”), with the cheery patience of a kindly traffic cop at rush hour, “Wild Goose Dreams” seeks to reflect the fragmented worldview that comes from living in a digital age. The play is annotated by a chorus of six performers who speak in the exasperating language of computerese. Or do I mean internetese?

You’ll recognize it when you hear it, that staccato succession of phrases such as “like!” and “love this!,” and “delete!” and “reboot!,” and random voices delivering teasing phrases like “Why ‘Footloose’ was the ‘Frozen’ of the 80s!” and “Loneliness: the true cause of addiction!” It is in such a tangled forest of information bites, on a site called Love Genie, that Nanhee and Minsung have their first virtual meeting, under the screen names of Miner’s Daughter and Gooseman.

Those appellations refer to the sources of their loneliness. Nanhee is indeed the daughter of a North Korean miner, whom she has left behind in defecting to the South and whose spirit (embodied by Francis Jue) haunts her daily life. The South Korean-born Minsung has sent his wife and daughter to the United States, while working in Seoul to support them, which makes him, in local parlance, “a goose father.”

But wait. There’s more flight-oriented imagery to process. The play begins with Jue, as Nanhee’s father, relating a bedtime folk tale about an angel who loses her ability to fly and falls in love with a mortal man, and who must later choose between staying on Earth or ascending to the skies once again. The conflicting demands of freedom and family turn out to dominate Nanhee and Minsung’s lives.

Penguins will later play a part in their story, including one cunning puppet version who pokes its head out of a toilet to taunt Nanhee, who is spending her first night in Minsung’s tiny apartment in a barracks like building for students. And then there’s the battalion of North Korean troops that shows up accessorized with penguin heads in one of Nanhee’s guilty fantasies.

As Nanhee deals with her conflicted feelings about fleeing her homeland, Mansung keeps trying to connect with his wife (Jaygee Macapugay) and daughter (Kendyl Ito), sometimes by phone, sometimes on Facebook. And the gaps — generational, cultural, technological — just keep widening. Mansung finally finds himself reaching out to Nanhee with a pop song he wrote about suicide in a YouTube video that goes viral.

The diverse and untethered world of “Wild Goose Dreams” has been given remarkably coherent life by a design team that includes Clint Ramos (the neon and anime-inflected set), Linda Cho (costumes) and Lillis Meeh (special effects). It is to the credit of everyone involved that it is possible to follow the script’s leaps among its assorted realities and fantasies.

That’s partly because Jung, a writer of industrious imagination, has a poet’s gift for sustaining and interlinking motifs and metaphor. Still, the piling up of incidents and images and subplots has a congestive effect here, blurring our focus and blunting our emotional responses.

Is this overstuffed rendering of an overstimulated culture what they call the fallacy of imitative form? (I pulled that one out of my dusty memories of comp-lit classes; now if only I can find a use for “objective correlative.”) In any case, the text could benefit from pruning and weeding.

Holding fast as the play’s still but agitated center, Kim and Krusiec bring a lovely, low-key air of bewilderment to the proceedings that honors their characters’ humility and ambivalent hopefulness. And their dialogue has a piquancy that will surely sound original to most American ears.

In what other play in New York can you find a character earnestly contemplating her fear that her life is “as meaningful as the tip of a toenail that is clipped off during a pedicure”? Or the pricelessly self-revealing line, “It is shameful, but my penis is interested in devastated women”?