Review: ‘Marnie’ Stays in the Shadows in Nico Muhly’s Opera 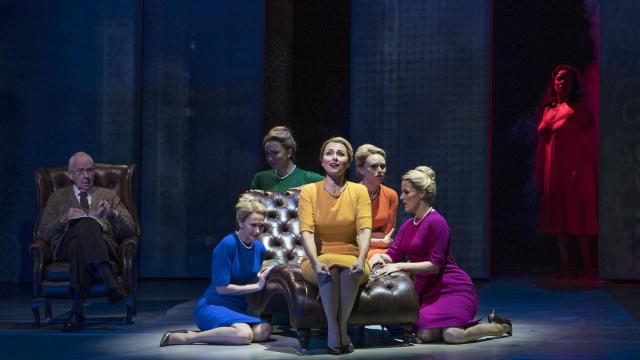 NEW YORK — In crucial moments of an opera, despite what characters on stage may be singing about, the orchestra can signal what’s really going on and suggest subliminal emotions and disguised feelings. So composer Nico Muhly was smart to seize on Winston Graham’s 1961 novel “Marnie,” which inspired Alfred Hitchcock’s strangely stylized 1964 film, as an intriguing subject for an opera.

This story’s baffling central character is a glamorous and troubled woman in late-1950s England, who moves from job to job, changing her look and identity, compulsively embezzling money from employers. But who is she? Why does she do it? Graham’s novel is written as Marnie’s first-person narrative. Even so, the more this Marnie seems to reveal, the less you trust her voice.

Muhly’s “Marnie,” with an effective libretto by Nicholas Wright, had its much-anticipated American premiere at the Metropolitan Opera on Friday. This is Muhly’s second Met commission. (“Two Boys” opened there in 2013.) With his keen ear for unusual harmonies and eerily alluring sonorities, Muhly painstakingly tries to use his imagination — and his proven skill at orchestration — to flesh out Marnie’s inner life.

But despite passages of richness, ambiguity and complexity, especially in the orchestra, the music seldom plumbs the darkest strands of this psychological drama. Muhly opted, it would seem, to maintain mystery through whole stretches of the score, to suggest emotions rather than making everything explicit. He may have held back too much. The music sometimes seems like an accompaniment to the drama, rather than a realization of it.

It starts off strongly by depicting a bustling day at the office of the accounting firm where Marnie works. The chorus sings a gaggle of overlapping phrases (“An invoice for our services,” “I like your nails that color”) that had an intriguingly manic feel. We first hear Marnie (plush-voiced mezzo-soprano Isabel Leonard) exchanging meek pleasantries when introduced by her officious boss, Strutt (clarion tenor Anthony Dean Griffey), to a self-assured client, Mark Rutland (sturdy, suave baritone Christopher Maltman). All the while the orchestra teems with fragments of skittish lines, piercing sonorities with notes that mingle into needling dissonances, chords that unfold in halting bursts atop pulsing rhythmic figures, and ominous, heaving bass lines that sometimes seem eerily disconnected.

The best scenes in “Marnie” come when Muhly, in sync with Wright, takes creative chances. Rather than providing Marnie with any sort of tell-all aria, the opera gives her short transitional “links,” as Muhly calls them, disoriented soliloquylike passages where in broken bits of restless, leaping lines she voices bitter, confused ruminations. “What shall I be?” she sings after robbing the safe at the accounting office and deciding she must move on with a new identity. In a later link, after Mark forces a kiss upon her, she spouts disgust at his “slobbery lips,” his “flickering tongue,” in shards of phrases over a hurtling orchestra.

In the work’s most inspired touch, Marnie is trailed during key moments by four blonde women wearing single-color office dresses, called Shadow Marnies, who encircle her, providing harmonic backdrops and sometimes melodic counterpoints to her lines. Muhly, who grew up singing in church choirs, instills these fleeting scenes with hints of early sacred music over pungently subdued writing in the orchestra. And the shadows were crucial to another compelling scene in the office of a psychoanalyst. Earlier in the opera, after Mark catches her stealing from his office safe, Marnie agrees to marry him, seeing no way out. But frustrated that she recoils at his touch, he makes a bargain: If Marnie will see an analyst he will place a horse she owns, the only thing in life she loves, in a stable for her. In this scene, over a stretch of fraught and suspenseful music, the Shadow Marnies take turns on the analyst’s couch, which proved a powerful metaphor: Don’t all people reveal multiple personalities in a therapist’s office?

Leonard brings a rich voice, a deceptively demure look and moments of poignant vulnerability to Marnie. Despite this, the extended scenes when Marnie interacts with her employers, her sullen and secretive mother (mezzo-soprano Denyce Graves, back at the Met after a dozen years, and riveting), and even Mark lack dramatic definition and depth. Too many stretches of dialogue are written in a declamatory, slow-moving style that becomes ponderous.

Early in Act II, Mark has a monologue infused with wistful stretches that made me realize how few other times the score opens up lyrically. Marnie, dressing for a business dinner, is in earshot of Mark as he describes coming upon a frightened deer in a meadow. He likens the animal’s panic to the way Marnie resists him. His plaintive lines float atop undulant orchestral ripples and bucolic woodwind harmonies tweaked with clashing intervals. For a moment Mark seems not stiff and domineering, but needy and perplexed.

Muhly channels the most visceral music of his score into episodes of crude propositioning and sexual aggression that Marnie has come to expect from nearly every man she encounters. In this #MeToo cultural moment, the depicted behavior seems not a throwback to earlier times in gender relations but all too relevant.

A major offender is Terry Rutland, Mark’s younger brother and his “wayward deputy” in the family business, a role for countertenor (the dynamic Iestyn Davies). Terry’s defensiveness about a large red birthmark on the side of his face only fuels his boorish behavior with Marnie. After a poker game at his home, he corners Marnie, who threatens to slap him. “Do it!” Terry shouts, as the orchestra has a rare eruption of gnashing, fitful vehemence. In the final scene of Act I, Mark turns out to be ever worse. Frustrated at their sexless first week of marriage during a miserable honeymoon cruise, Mark tries to force himself on Marnie, who flees into the bathroom and slashes her wrists.

“Marnie” benefits from director Michael Mayer’s sleek and fluid staging, with inventive sets and projections designed by Julian Crouch and 59 Productions. (It was first seen last year in London for the work’s premiere at the English National Opera.) Scenery changes are deftly rendered through sliding and descending panels on which evocative images are projected.

Muhly’s music could not have had a better advocate than conductor Robert Spano, making an absurdly belated Met debut at 57. He highlighted intriguing details, brought out myriad colorings, kept the pacing sure and never covered the singers. Where has he been?

Whatever one’s feelings about the Hitchcock film, it was inspiring to see its star Tippi Hedren, now 88 and looking wonderful, come on stage during final ovations with the operatic Marnie at her side.