Review: In ‘The Revolving Cycles,’ What Happened to Terrell? 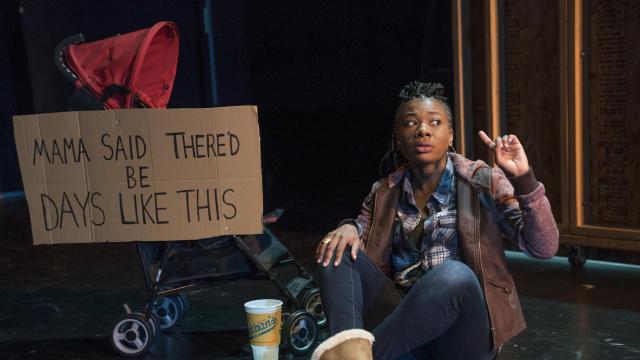 NEW YORK — The short, grim lives of young black men in violent cities are all the rage onstage right now — and I do mean rage. “Pass Over,” “Until the Flood,” “Kill Move Paradise” and “Scraps” (still running at the Flea Theater) are just four recent plays among many that channel the fury of places like Chicago and Ferguson and Cleveland into drama.

“The Revolving Cycles Truly and Steadily Roll’d,” which opened Wednesday at the Duke on 42nd Street, aims as high as the others — but so much wider that its author, Jonathan Payne, cannot quite corral its effects. In both style and content he tries to do too much, even though his chief concern, the hole left in society when its young black men disappear, is important and powerful.

Those powerful parts, for me, are the ones that cling most closely to the central story of the 17-year-old Karma — her name an obvious tip-off that we will be dealing with fate and retribution. A “dirty little hood rat” as tough as any boy, she spends the play as a detective, searching the streets of her urban neighborhood, called the Oblong, for her former foster brother Terrell. We never quite learn why she is so attached to a young man whose life intersected hers only briefly and who had, as his ex-girlfriend reports, “a rock heart.”

Karma (Kara Young) doesn’t deny that but doesn’t care: “At the end of the day he’s a person,” she responds, as if arguing for her own importance as well. And in a series of closely observed scenes with people who knew him — a high school teacher (Kenneth Tigar), a foster mother (Deonna Bouye), a foster brother (Donnell E. Smith), a young man on parole (James Udom), a Fagin-like Oblong elder (Keith Randolph Smith) and that angry ex-girlfriend (Bouye again) — we feel Karma’s anguish without needing to pin down the specifics.

This is confident genre playwriting: By observing the way a character moves through the steps of a familiar form, in this case a missing-person procedural, we absorb setting and character and sociology without having it explained. And here Payne, whose day job is in social work, captures with clinical precision the defenses and despair of the chronically under-nurtured.

But Payne is not, apparently, content with that. Like many early-career playwrights — this Playwrights Realm world premiere, directed by Awoye Timpo, is his first fully staged professional production — he is eager to offer in one work a tasting menu of everything he knows how to do. Framing the scenes with Karma, he therefore gives us both a preshow and a prologue, supertitles and asides, “exhibits” and parables. They are as penetrating as a dentist’s drill but, sadly, just as subtle.

Perhaps subtlety wasn’t wanted. As the characters sometimes hustle the audience for money, so the playwright hustles it for outrage. Letting the content dictate the form, he has written an aggressive play about lives steeped in aggression, and yet it asks a lot of strangers to sit and be hectored, for the sake of argument, as the source of the problem. “You don’t even know it,” says Rose Profít (Lynda Gravátt), speaking straight at us, “but you are to blame, you quiet, stagnant mass.”

“Madame” Profít (pronounced “pro-FEE,” she tells us) runs the Amigone funeral home. Her thread of the story, which touches Karma’s only tangentially, is not naturalistic but presentational and, as those names suggest, satirical.

Often sermonizing as if to crowds gathered for community events or funerals, she represents an older black generation that has abandoned the younger while profiting from its tragedy. In her behavior toward three very different women — a grieving mother, a strung-out addict and a young protégée, all played hauntingly by Toni Ann DeNoble — she exults in an almost Dickensian self-regard.

That she is a cartoon villain — her main objective seems to be to steal the play itself back from Karma — wastes an opportunity. In general, Payne loses his footing trying to theatricalize causes rather than effects. When we finally get to the obligatory scene involving Karma and a white policeman (Tigar again), “Revolving Cycles” has a Pirandellian nervous breakdown; it seems to be speaking to other plays and playwrights instead of to the audience.

The effect is bewildering, which is not in itself a bad thing. One of the ways plays can work in difficult times (and what times aren’t?) is by pumping up the volume of the feelings we bring with us into the theater. “Revolving Cycles” does this quite well with our hopelessness and confusion but also, less usefully, with our defensiveness and weariness. I found myself alternating between a desire to lean into the material more deeply and a desire to get out of the Duke before one of the characters forced me (as they forced others) to read aloud from a newspaper or pretend to be a mayor.

Audience participation is like plutonium; it needs to be handled delicately. Ideally, it is narrowly tailored to drive home the point of the play. (A good example is Jackie Sibblies Drury’s “Fairview,” in which the big twist had a big, if painful, payoff.) But the metatheatrics of “Revolving Cycles,” including the cumbersome title, drawn from Walt Whitman, do the opposite: They undermine.

That’s a shame because the scenes that don’t try so hard to be clever are so good. Also because the author’s showboating keeps interrupting the terrific work the cast is doing elsewhere. (As is often the case at Playwrights Realm, which produced “The Wolves” in 2016, “Revolving Cycles” showcases the exciting talent of many underexposed actors.)

Likewise, Timpo, who directed “The Homecoming Queen” for the Atlantic in January, fares far better with the traditional material than with the supposed relief from it. Her daring gestures at the end of each act are the kind that, unlike the play as a whole, give gimmicks a good name. They do not let you wriggle away from the emergency of so much wasted life.