Review: In ‘The Emperor,’ Apologizing for a Corrupt Regime 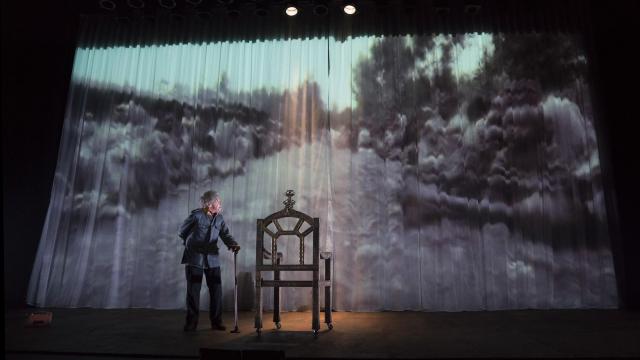 NEW YORK — Journalistic virtues are not necessarily theatrical ones. What’s compelling in newsprint, or for that matter in life, does not always scintillate when turned into a play.

That is but one of the problems with “The Emperor,” a Theater for a New Audience production that opened Sunday at the Polonsky Shakespeare Center in Brooklyn. As an account of the fall of the Haile Selassie regime in Ethiopia, it is informative and clever, and features a notable performance by that shape-shifter Kathryn Hunter. But as drama, it’s dead.

That’s not because it’s historical (or purports to be). The book it’s based on — also called “The Emperor” — is retrospective and literary and of questionable veracity yet often feels like live footage. Written by the Polish journalist Ryszard Kapuscinski, it tells the story of the 1974 revolution entirely through the words of surviving functionaries within the Selassie government and household.

Most were menials. One’s job was to wipe the urine off visiting dignitaries’ shoes when the beloved imperial dog, Lulu, relieved himself on them. Another’s was to provide pillows so that the 5-foot-2 emperor’s feet would not be seen dangling from the throne. We also meet the minister of information, a grander sort whose duties were nevertheless much the same: to swab and obfuscate.

The book’s hypnotic power does not derive so much from its wild details as from its epically sarcastic tone. We are meant to scorn the servants not just for their delusion that they were crucially important to the empire but also for their need to believe that the emperor was infallibly good. To that end, they interpret massive corruption and even war crimes charitably. Selassie may have ordered that the “mutinous rabble” of student protesters be fired upon, but he did so, one servant explains, “only rarely.”

The play, adapted by Colin Teevan, retains this tunnel-vision portrait of men in whom loyalty has become pathology. Hunter portrays 11 of them, including the shoe-wiper and the pillow-bearer, as well as the “keeper of the third door” (much more important than the keepers of the other doors) and the “cuckoo” who announces the hours. Doing little more than adjusting her posture and accent, or sometimes changing hats or turning up the collar of her gray uniform jacket, she instantaneously transforms from one to the next, for the most part keeping them distinct.

But something untoward happens when these characters are swiftly inhabited onstage rather than quoted at length in print. They become at the same time odder — the “cuckoo” is quite a bizarre little creature — and also more sympathetic. Hunter, being an actress and not a satirist, imbues these myopic flunkies with so much dignity and humanity that we are forced to take their legitimacy for granted, regardless of historical accuracy. They live now, whether or not they did then.

That raises a bunch of other questions. Uncontested by any countervailing argument, and lacking Kapuscinski’s thick crust of irony, the nostalgia of the functionaries leaves you with the sour sensation that the play is tempting you to mourn the end of Selassie’s horrendous regime. And it’s at least arguable that what came next — 17 years of Soviet-backed military dictatorship — was worse.

That’s a useful tension to the extent that it makes an audience question its own place in history. If we are not part of a resistance to whatever injustices our era dreams up, will future journalists be able to say we too were lap dogs and apologists?

But the universality and airiness of that argument means that there is little dramatic shape to “The Emperor.” Stating and restating the same proposition for 70 minutes, albeit in different voices, it comes off as a well-meaning stunt.

Teevan tries to address this problem by altering stories left dangling in the original to give them the appearance of emotional resolution. Urinating Lulu, for instance, abandoned by Kapuscinski on page 5, reappears at the end of the play for a final moment of pathos. The tale of the minister of information’s son, a student drawn into the revolution by the “painful inconvenience and troubling deformity” of thinking, is likewise brought to a conclusion not mentioned in the book, let alone in history. That son is played by Temesgen Zeleke, a native of Addis Ababa. In his brief scenes of conflict with Hunter as his father, we finally get a three-dimensional feeling of conflict instead of a cartoon diagram. The play could use more dramatization like that — and less of the mod internationalism and bizarre audience participation with which the director, Walter Meierjohann, has attempted to vary the tone.

In any case, I’m not sure that having Zeleke spend most of the play sitting at the back of the stage, providing the keening voice of the people in Amharic and playing an Ethiopian lyre, is a wise way to deploy a black actor in a story about Africans.

Hunter, born to Greek parents in New York, was raised in England. Contrary to social media rumors, she has never worn makeup to darken her skin in “The Emperor.” (The play, a coproduction with three European theaters, had its debut in 2016.) She doesn’t need to; her acting is more than sufficient to handle the job of embodying Ethiopian men.

Whether she ought to be doing it is a separate question. As good as she is, I can think of lots of black actors — Nilaja Sun, Sarah Jones and Anna Deavere Smith come immediately to mind — who are at least as nimble.

Still, I don’t think anyone could have gotten more out of “The Emperor” than Hunter does. That the story is meant to be universal provides the perfect excuse for a performer of any race to take on the challenge. Unfortunately, at least as staged so coolly here, it also makes the challenge less worth it.