Review: In ‘Days of Rage,’ the Revolution Will Be Trivialized 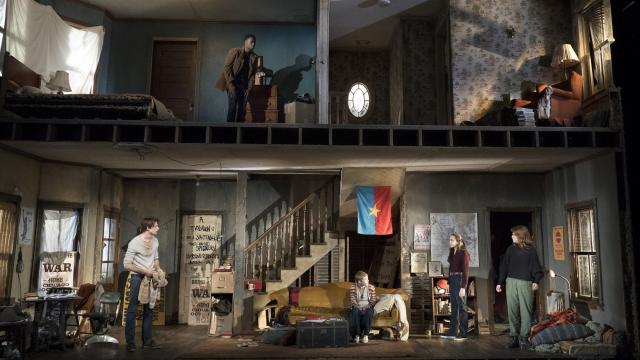 NEW YORK — When playwright Steven Levenson, then a “bored high school junior,” found himself outside the Supreme Court on a December evening in 2000, it was not because of a passionate interest in the case of Bush v. Gore then being decided or a fondness for demonstrations.

“The truth is I had never been to a protest,” he wrote last year in an essay about political engagement. “And it sounded like a good story to tell at school on Monday.”

In some ways, Levenson’s disappointing play “Days of Rage,” which opened Tuesday at Second Stage Theater, is that good story, except turned inside out. In this version, callowness has curdled into cynicism, and it isn’t naïveté being mocked. Instead, young radicals who believe themselves to be fighting injustice are shown to be fools — and worse.

A peaceful march is not what the play’s characters, affiliated with Students for a Democratic Society, are after. Disappointed by years of unsuccessful agitation against the war in Vietnam, the three remaining members of a ragtag collective in an upstate New York town are ready for revolution.

As the action begins in October 1969, Jenny (Lauren Patten), Spence (Mike Faist) and Quinn (Odessa Young) are hoping to convince hundreds of locals to join them in Chicago for the “Days of Rage” action organized by the Weatherman cadre then taking over the leadership of the SDS.

After weeks of leafleting they have five people signed up. Including themselves.

Their failure as organizers puts a strain on the household, which is run with strict collectivist principles. All decisions are made by majority vote. All behavior is subject to quasi-sadistic group criticism sessions. All money is shared and bodies too, supposedly to prevent individual attachments from undermining the mission.

Cutting against this discipline is the chaos of 20-somethings living in a hovel. (Louisa Thompson’s set, a cross-section of a house barely managing to stand, is completely convincing on that score.) Quinn, the truest believer, accuses Jenny of not cleaning the pantry. Spence, who fancies himself the theorist, has doubts about Jenny’s doctrinal (or, at any rate, sexual) devotion. And with little more than $50 among them, paying the rent may be a more pressing issue than supporting the Viet Cong.

So far so good; the ineptitude and jumbled motives of agitators — ego, angst and anomie included — are ripe for satire.

And though the failures of radicalism are a common enough theme of fiction (“American Pastoral”), film (“Running on Empty”) and earlier plays (“Other Desert Cities”), “Days of Rage” renews the genre merely by asking how far we would go to stand up to a government we consider bereft of values. On Saturday night, just a few hours after the murder of 11 people at a synagogue in Pittsburgh, the gasp of the audience when a character brought out a gun seemed more than just a response to a plot turn.

But with the introduction of two outsiders, the play starts tugging in incompatible directions. Peggy (Tavi Gevinson) is a rich runaway whose willingness to join the collective and cover its bills comes with a big problem attached. She’s a troublemaker, pushing the others into paranoiac corners and the play into overdrive. Whenever she’s in a scene, it becomes more about individual psychopathology than group dynamics, and not very credible in either case.

Hal (J. Alphonse Nicholson) pushes the other way. He is black, has a brother in Vietnam and has already experienced the injustices the others blather about. Their condescension to him and his bemused response are the most interesting things in the play; when Jenny confesses she is a racist, “like everyone in the country,” what can Hal answer but “great”?

Levenson excels at overall dramatic architecture; as in “If I Forget” and his book for “Dear Evan Hansen,” the timing and payoff of plot points here is unimpeachable. But the clash between heavy-handed satire and naturalistic conflict leaves “Days of Rage” in a tonal muddle he can’t resolve. The sexual turn that provides closure to many of the scenes quickly begins to seem like a tic, and when that pales, the only option left is a generalized hysteria.

At least the hysteria is effectively staged. Director Trip Cullman gets all the tempos right, forcing the audience into an uncomfortable alliance with the characters as they hole up in their hovel, certain they are about to be attacked. And the cast — especially Patten, lately seen in “Jagged Little Pill,” and Nicholson, riveting in “Paradise Blue” — does a good job filling their shells of characters with genuine personality. Gevinson’s breathy, bug-eyed weirdness, so distracting in other roles, is surprisingly effective here.

If only she weren’t playing such a worm and a dilettante. To the extent “Days of Rage” focuses on Peggy — she sets the plot in motion — it seems to suggest that the entire anti-war movement, or at least its radical fringe, was an adolescent tantrum, with no intellectual heft however much Hegel was read. (Peggy thinks Lenin is a Beatle.)

Certainly many did things during that period they needed to regret; some have spent the last five decades explaining and paying for their behavior. In “Days of Rage,” a somewhat lame “what happened to them” coda tots up the costs and the accommodations of the characters’ bad choices.

But in the bigger picture, the radicals were not the problem. They were the ones willing to reopen the question of how America should function — to say, as Jenny does in one of the play’s best moments, “Once you know what’s happening in the world, in your name, all over the world, then the only extreme thing really is to do nothing.”

Foolish they may have been: paranoid, grandiose and rigid in their thinking. But who does that sound like today?