Review: Beyonce's high-energy show even better in the rain 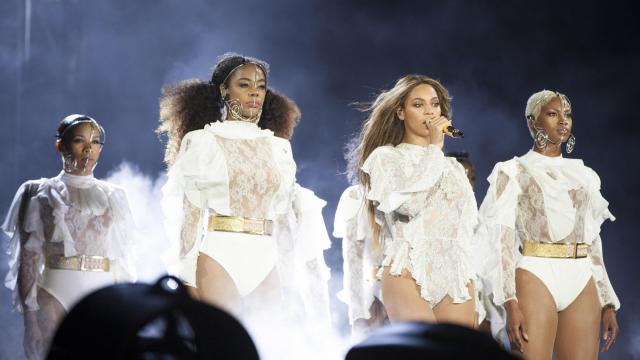 Raleigh, N.C. — Rain or shine, Queen Bey delivered. Despite dramatic circumstances, she danced in the rain, jumped in puddles and managed to keep almost an entire stadium around after an hour lightning delay.

Beyonce's Formation World Tour was a mix of female empowerment and booty-shaking fun Tuesday night at Carter-Finley Stadium. But some wondered if the show would even happen. Controversial House Bill 2 had many artists canceling performances in the state. While Beyonce made no mention of the bill during the show, she posted a statement on her website saying she does not support the new law.

"As The Formation World Tour makes its stop in the Tar Heel state in the midst of such a controversial time, we think it is important for us to bring attention to those who are committed to being good and carrying on the message of equality in this core of controversy," she said in the statement.

The focus of her nearly two-hour long set was on her new album, past hits and getting through the severe weather that threatened to cut the show short.

After a spirited set by opener DJ Khaled, a Snapchat sensation and producer, Beyonce took the stage just before 9 p.m.

Starting the show with "Formation," Beyonce in her black wide brimmed hat (which many fans were rocking variations of in the crowd) and a group of similarly clad dancers took to the stage, emerging from clouds of billowing smoke. She asked the crowd to repeat "I slay." Beyonce then went straight into a energetic version of one of her new hits "Sorry," as the crowd sang along - having already memorized every word. 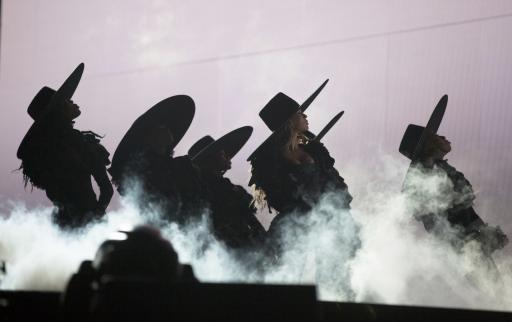 Beyonce is only a few shows into this world tour, but her dancers, stage production and lighting is on point. She seamlessly weaved in tracks from "Lemonade" and her older hits "Countdown," "Ring the Alarm," "Crazy in Love," "Me, Myself and I" and "Run the World (Girls)" plus a bonus cover of R&B crooner D’Angelo’s “Untitled (How Does it Feel).” She noted that her favorite track off of the new album is “All Night,” and sang to the crowd, “Where were you when Lemonade dropped? I stopped the world.”

Throughout the night, the enormous video screen block on the stage showcased scenes from her "Lemonade" video album, fan videos - a nice shout out to her beloved Beyhive - and personal home videos of Beyonce and her family, including daughter Blue Ivy and husband Jay Z. 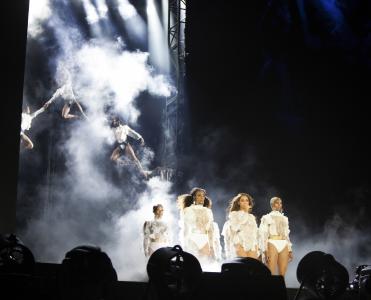 While the rain seemed to be holding up, the skies opened up during her performance of sexed up track "Rocket." At the end, Beyonce climbs onto a chaise lounge chair and slides down it. The silhouette of it looked even better as the rain poured down. Unfortunately, the lightning wasn't far behind and security announced an evacuation of the stadium. Fans were told the show was "suspended" but Beyonce "wasn't leaving" yet.

Despite the severe weather threat, the evacuation plans for Carter-Finley were incredibly disorganized for those with floor seating. The masses had to either try to go back upstairs and out of the arena or be herded backstage only to be told to walk back to the middle of the arena, then finally brought backstage to go through the tunnel to PNC Arena. No, we didn't see Beyonce back there. But we did see her portable toilet. And the chair she sat in for her performance of "Bow Down."

Fans were allowed back into Carter-Finley just before 11 p.m. and the show started less than 30 minutes after that. Despite the delay, most of the stadium stuck around for the rest of the show.

The show must go on! Beyoncé is back on stage in Raleigh! #FormationWorldTour pic.twitter.com/y4ufoZkjTN

Beyonce’s voice cracked with emotion as she thanked fans for staying as she hit the stage to perform "Daddy Lessons," as the stadium clapped along. She moved right into "1 plus 1" before the stage turned purple and the late Prince's "Purple Rain" was played - a fitting track for the evening. When the song was done and the lights came up, Beyonce was clad in red patent leather and a red fur coat. She launched into "Crazy in Love" followed by "Bootylicious" and "Naughty Girl."

One of the highlights of the night was a barefoot Beyonce and her dancers stomping through a small pool of water at the end of the stage during her new heart-pounding hit "Freedom." This is one of the standout tracks on Lemonade, produced by long-time Jay Z producer Just Blaze.

The rain started to come down again during "Survivor." Beyonce was already dreanched, and she seemed to relish splashing in the water while she pounded out the anthem in a bejeweled, white bodysuit designed by Dsquared2.

"The rain is actually beautiful," she said, looking up at the sky before moving into her final song of the night, "Halo."

That's a wrap #Raleigh! Thank you for an amazing show @Beyonce! Fans, thanks for sticking out the 🌧 drive safe! pic.twitter.com/FkeNlJD1xy

As the rain fell and fireworks filled the sky, she belted out the lyrics "everywhere I'm looking now, I'm surrounded by your embrace. Baby, I can see your halo. You know you're my saving grace."

Like the orchid featured on tour merchandise and screens in the venue, long time Beyonce fans witnessed the blossoming of the artist from pop diva to a more introspective artist with a story to tell and something to stand for beyond all the gloss and glitter.