Review: A Balanchine Festival, With Masterpieces in Safe Hands 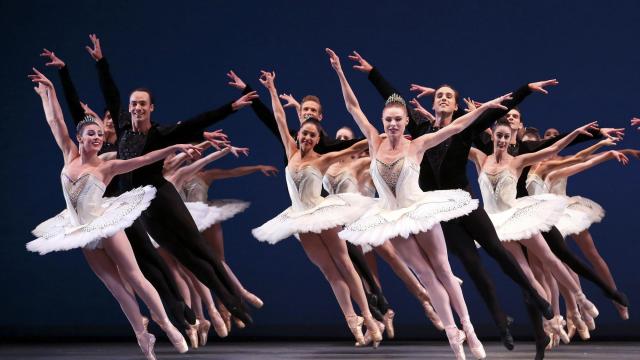 NEW YORK — A sense of momentousness charged the air Wednesday night when New York City Ballet performed “Symphony in C.” That 1947 masterpiece by George Balanchine is a staple of the company’s repertoire, so the big deal wasn’t the performance so much as where it was happening: not at the company’s decades-old Lincoln Center home, but at New York City Center.

The occasion was the first program of “Balanchine: The City Center Years,” a major festival, running through Sunday, that the theater has organized as part of a season celebrating its own 75th anniversary as an institution. The historical echoes were large.

“Symphony in C” came last, a foolproof finale. It doesn’t just provoke applause, though. It inspires conversion. When Jerome Robbins attended the first performance of City Ballet, at New York City Center in 1948, he was already an in-demand choreographer, in ballet and on Broadway. But “Symphony in C” moved him to put that at risk and offer his services and devotion to the fledging troupe.

It’s had a similar effect on many others. It was on a program that inspired Morton Baum, the businessman who was chairman of City Center’s finance committee in 1948, to offer Balanchine a home, leading to the creation of City Ballet.

It’s hard to overstate the importance of that offer in the history of ballet and of the arts in America. It gave Balanchine, the Russian choreographer who had been brought to America by Lincoln Kirstein in 1933, the security of an official (if not yet well-funded) institution. In 1964, the company would move to a larger theater created for it at Lincoln Center.

Yet the City Center years were crucial, not just for the astonishing variety and power of the works Balanchine choreographed, but also for the consolidation and expansion of his American style of classicism and the preservation of what he had accomplished before 1948.

To commemorate all this, City Center wanted to throw a big, fancy party of a festival, and to make the party big and fancy it has concentrated on the guest list. Eight companies are participating, an attention-getting representation of the world’s greatest ones, including the Paris Opera Ballet, the Mariinsky from Russia and the Royal Ballet from England. Four companies perform on each of the festival’s six programs, presenting a total of 13 works.

That’s a logistical achievement. But scheduling must have determined a lot of the programming, and which pieces to present. Those choices raise questions: What do the guests bring to the party? And is that more important than thematic considerations? Does the starry celebration get in the way of showing what was important about Balanchine’s years at City Center? Opening night provided some clues.

The evening began with “Serenade,” the first work that Balanchine choreographed in America, in 1934. A beloved, enduring dance, ingenious in construction, elusive in its hints of story, it establishes so much of the promise of what he would do here. And performing it, Miami City Ballet proved that it belongs in the festival. An offshoot of City Ballet, the Miami company understands what Balanchine discovered and taught: how exactitude needn’t sacrifice warmth; how even in romanticism, rhythmic accuracy allows momentum to build.

As the company in which Balanchine was raised, the Mariinsky arguably belongs in the festival too. “Tschaikovsky Pas de Deux,” a 1960 supercharging of Russian tradition, is a showoff vehicle, and Kimin Kim, a Korean star with a modest manner, made the audience gasp with softly powered jumps that hung in the air. His partner, Viktoria Tereshkina, was lovely, correct and coy in a slightly haughty Russian manner, but I couldn’t help but miss the exciting sense of risk that City Ballet dancers bring to this piece.

Comparisons of style would seem to be a benefit of the multiple-company approach, but only “Tschaikovsky Pas de Deux” will be performed (on Thursday) by members of another troupe, Anna Rose O’Sullivan and Marcelino Sambé of the Royal Ballet. On Wednesday, they danced “Tarantella,” another workout duet, but in ballet-Neopolitan style, with tambourines. Since it’s the final piece that Balanchine choreographed at City Center, there’s some justification for its inclusion, but the cute, too careful performance of O’Sullivan and Sambé had me thinking about more works that didn’t make the cut — ballets harder to stage but more important.

“Symphony in C” stirs no such doubts. And City Ballet, dancing it, demonstrated what it means to have Balanchine style in your bones. Tiler Peck, leading the first movement, showed what pouncing on top of the rhythm is all about, and Sara Mearns, gliding through the second, revealed how much tragic emotion can be conveyed through musical dancing.

That’s especially apparent at City Center, where the audience is much closer to the dancers than at Lincoln Center. It’s easier to see faces, prompting thoughts about how important they are or aren’t. When the whole huge cast fills the stage at the unbeatable end of “Symphony in C,” they really fill it at City Center, giving a different perspective on how Balanchine’s choreography can activate space.

Seeing City Ballet dance “Symphony in C” at City Center does give something you can’t quite get at Lincoln Center. But the main emotional impact is the same as ever, shaded with gratitude. Balanchine made the dance for the Paris Opera Ballet in 1947. It might have inspired France to offer him a home. Instead City Center did. And we got Balanchine.