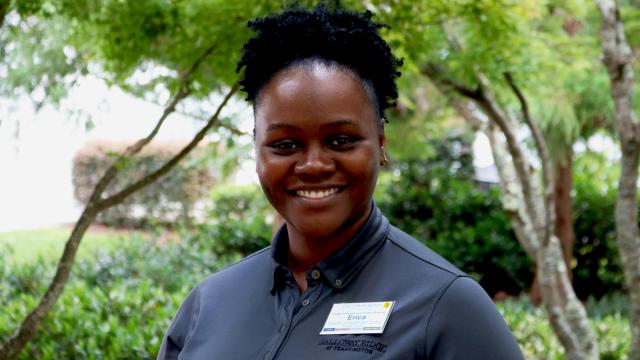 When Erica Rone started working as a server in a cafe at Galloway Ridge, a life plan community in Pittsboro, she didn't know that she'd be embarking on the next 14 years of her life.

Over a decade since her arrival at Galloway Ridge, she is now the director of healthcare dining and last year's recipient of the Galloway Ridge Spirit Award. The Spirit Award is given to an employee who lives and breathes the company culture. The recipient is someone who is consistently jovial, encouraging, supportive and friendly.

"It's awarded on the demonstration of Galloway's core values — empowering people, being committed to the company, which I am," Rone said. "There are so many people that go to work every day and hate their job. I do not. I come here every day like it's a new day and make the best of it while I'm here."

It's not uncommon to find Rone in the hallway chatting with a resident. She takes the time to ask how someone is doing instead of muttering a "hello" as she passes by them.

Kathy Turner, senior director of human resources at Galloway Ridge, said Rone is the embodiment of the retirement community's culture and will stop what she's doing at a moment's notice to resolve an issue. Since the Spirit Award is employee-nominated, it's undeniable that Rone's example is recognized by staff and colleagues alike.

Coworkers across multiple departments rely on Rone for guidance and expertise. They look to her as a role model.

"The person who receives this award enhances the work environment simply by being themselves," Turner explained. "She's always the first person to do whatever she can to support her employees in times of need. I love working with her, and I've been here for almost eight years. I feel that she has given so much to the Galloway Ridge community and the residents, and she has earned that director position. She's great at what she does."

Over the course of her time at Galloway Ridge, Rone has been a server, a supervisor, a manager and now a director. She makes sure that residents get three nutritional meals per day while managing both cooks and servers.

Rone is also the second-longest working employee in Galloway Ridge history. She said the residents are the reason she comes to work every day and have made the years fly by.

"Meeting the residents when I first moved here in 2005 and seeing them grow has been motivating," Rone said. "At the time, my daughter was three, so we've built relationships and have grown to become a family. They ask me about my life, I've met their kids, there's just a connection and bond."

Now that Rone works in the Arbor Healthcare Center, she sees some residents who she initially met 14 years ago who are now in a different life phase. It gives them comfort to see a familiar face, and Rone does her best to take note of their likes and dislikes, and pick up on the continuum of care.

That care goes both ways.

One of Rone's most touching moments of her career to date occurred when she received a home from Habitat for Humanity. Some of the residents who volunteered with the local program showed up to support her and present her with the keys to her new house.

"I was very emotional because, at that point in time, it just confirmed that it was more than just me coming to work and doing a job — they were part of my family," Rone said.

Over the years, many residents have become family and have touched Rone's life. She noted a few by name, calling them "anchors" in her life that pushed her forward and told her that opportunities would come.

"I look forward to coming to work every day," she said.