Resurrecting a New Orleans Bar and Its Dramatic Drink 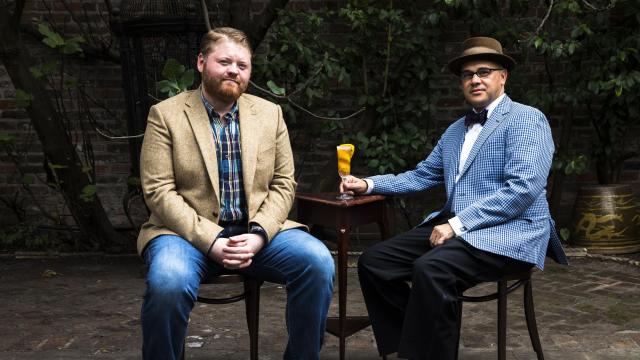 New Orleans has a good track record for celebrating its native cocktails. The drinks are so beloved by locals that there may as well be huge statues of the Sazerac and Ramos Gin Fizz in Jackson Square.

One classic New Orleans cocktail, however, has suffered from neglect. The brandy crusta is a cognac drink supported by lemon juice, Curaçao and maraschino liqueur. But its defining aspects — both theatrical — are a long lemon twist that snakes inside the glass and a sugared rim (the crusta).

The drink was the invention of New Orleans bartender Joseph Santini, who served plenty of them at his 19th-century bar, Jewel of the South. Cocktail experts believe that the crusta opened the door for many of the cocktail sours to come, not least of all the Sidecar.

“Santini is the guy who was really monumental in the development of cocktails in the state, and he’s kind of gotten short shrift,” said Nick Detrich, a New Orleans bartender.

Detrich and Chris Hannah, another local bartender, intend to correct that injustice. Later this month, they plan to open a new bar called Jewel of the South, dedicated to the spirit and memory of Santini. Its signature drink will be the brandy crusta. Like its namesake, the bar will be in the French Quarter, inside a Creole cottage on St. Louis Street that dates from the 1830s.

Detrich, who used to tend bar at Cane & Table, approached Hannah about the Santini-bar idea in 2016. Hannah was the logical man for the job: A decade earlier, soon after he began bartending at the French 75 Bar, inside Arnaud’s restaurant, he put the crusta on the menu.

“No one was making the crusta when I found out about it," Hannah said. “A guest at the bar showed me a travel guide to New Orleans and pointed to the crusta and the Vieux Carre, and in 2004 I didn’t know about either.” (Hannah ended his 14-year stint at the French 75 Bar in September. He and Detrich also own the Cuban-themed bar Manolito.)

Joseph Santini opened the Jewel of the South on Gravier Street in 1855. The Times-Picayune was duly impressed. “Its beauty of design and execution would do credit to any part of the world,” the newspaper declared. “The various paintings profusely scattered through the room are finished in the first style of art, and everything is in keeping with them.”

The brandy crusta got a boost when the recipe was printed in “Bar-Tender’s Guide,” the seminal 1862 volume by Jerry Thomas, the most renowned American bartender of the time. Santini sold his bar in 1869, and died a few years later while traveling in Europe, according to Detrich. (Santini is buried in St. Louis Cemetery. Years ago, in tribute to him, Hannah mixed up a graveside crusta there.)

The cottage that will house the bar is unusual for the French Quarter — a stand-alone structure with no buildings on either side. The ground floor of the two-story cottage is designed like a tavern; the second floor will be more for dining, with a small bar.

In addition to the brandy crusta, the bar will serve other classic New Orleans cocktails, as well as some original drinks, all made with flair.

“Santini was a flamboyant barman,” Detrich said, “and he was indicative of the bartenders of the time, where the drinks were a bit more garish, a little bigger in recipe as well as presentation. So we definitely want to harness that energy.”

Jewel of the South, 1026 St. Louis Street, New Orleans, no phone or website yet.

Lemon juice, for the sugared rim

Sugar, for the rim

Peel of 1 lemon, for garnish

1. Take a small wineglass, wet the rim with lemon juice, then dip in super to create an even sugar rim on the glass.

2. Using a Y-peeler, begin at the top of the lemon and peel a long, continuous twist, using as much of the skin as possible. Carefully position this twist inside the prepared glass, creating an internal spiral of lemon peel that reaches the top of the glass.

3. Combine all liquid ingredients in a cocktail shaker filled with ice and shake until cold, about 15 seconds. Strain into the prepared glass.