Raleigh, N.C. — Restoration and cleanup crews spent the day Monday trying to breathe the life back into homes and businesses that were damaged by Thursday's fire in downtown Raleigh.

A crew at the Edenton Street United Methodist Church has been working around the clock to help repair the youth center.

"Heavy water damage, heavy odor from the fire where it came in the roll-up doors to the gymnasium," said PHC Technical Director Josh Smith.

Embers burned holes in the roof of the youth center, which led to extensive water damage inside. Many classes that are normally held in the youth building had to be shifted to the main campus.

"Where the embers burned through the rubber roof, it caused severe damage from the first to the second floor, so we are having to remove ceiling tiles and drywall," Smith said.

Officials say the rebuilding process of the building damaged by the fire could take weeks, if not months.

Buildings on the periphery fared better, including the 119-year-old Department of Agriculture building, which had cracked windows.

"I think we are very fortunate that we didn't have more damage than we did," said Vernon Cox with the Department of Agriculture & Consumer Services. "The only thing we've done is we have blocked off the west entrance in case any of the panes fall out. We want to make sure they don't harm employees."

While the cleanup continues, so does the search for housing for displaced residents staying temporarily at local hotels.

"We have a couple people left. If their units were too affected, or they haven't figured out what they are going to do, they are still with us. We're going to keep doing what we can for them," said Trey Hardesty, the Hampton Inn manager. 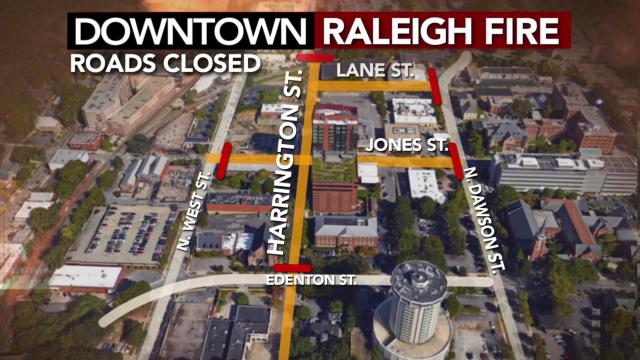 Ten buildings just east of Raleigh's Glenwood South entertainment district were damaged when the five-story Metropolitan apartment building under construction went down in flames. The heat from the fire, which totaled the building, toppled a construction crane and melted windows in condominiums of the Quorum Center and the Link apartments.

According to Emily Ethridge, a spokesperson for the company that owns the Link apartments, power was restored to the building on Monday. She said less than 50 percent of the apartments were damaged, but they cannot allow residents to return until the entire building is up to code.

Ethridge said the goal is to allow the residents who live in the units that were not damaged to return home as soon as possible.