The name says it all - Chow. At this north Raleigh spot, you get to chow down on homemade burgers and pizza. Chow is owned by Urban Food Group, which recently announced the closure of one of its other restaurants, Frazier's Wine Bar in Raleigh.

Chow's comfort food friendly menu grabbed our attention, so we decided to make it one of our Out & About lunch excursions.

Location: 8311 Creedmoor Road in a strip mall. Parking shouldn't be a problem because of the large lot for the strip. Inside, it has an upscale sports bar feel, but only a few TVs surround the bar. And if dining outdoors is your thing, they have a decent-sized front patio for diners.

The Company: Out & About lunch crew 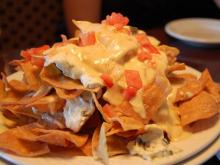 Here's what each of us thought:

Kathy: The nachos were the star of the meal, but my turkey burger came in a close second. Topped with Swiss cheese, this "burger" tasted better than some of the regular hamburgers I've ordered at other restaurants. It was juicy and well seasoned. Definitely a good option if you want to stray from the traditional hamburger. I upgraded my side to mac and cheese for an additional 95 cents. The mac and cheese side was actually larger than I expected. Creamy and just slightly crunchy, it was definitely worth the upgrade. I would like to go back and try a traditional burger or even their fish tacos.

Tara: The spinach and artichoke nachos were definitely my favorite part of the meal. It was such a nice change from regular nachos and the chips they serve were fresh and crunchy. I went with the classic burger as my entrée and it was more than enough. I ended up having half to take home with me. The burger was cooked exactly how I ordered it and had really good flavor. I’m excited to go back again and try out one of their signature pizzas like the Spicy Hawaiian.

Lisa: It was definitely worth the drive to north Raleigh – thanks to the many WRAL Out & About readers who suggested Chow to us! I really appreciated how our waitress was more than happy to substitute their veggie burger patty into the “Piedmont” burger (topped with Pimento cheese, fried green tomato and barbecue sauce) that I really wanted. And by the way, the lunch portion was incredibly generous. I took half of it home for dinner. I also really enjoyed the nachos shakeup with spinach and artichoke, rather than traditional nacho toppings.

The Service: As Lisa mentioned, our server was happy to offer substitutions and was incredibly knowledgeable about the menu. She kept our drinks full and made sure our entrees arrived promptly.

The Final Bill: Each of our entrees came in at under $9 and were so large we ended up with leftovers.

The Verdict: We are already planning our visit back to Chow to try out their pizza. We will try to leave enough space for dessert, as we have heard some great things about that menu as well.