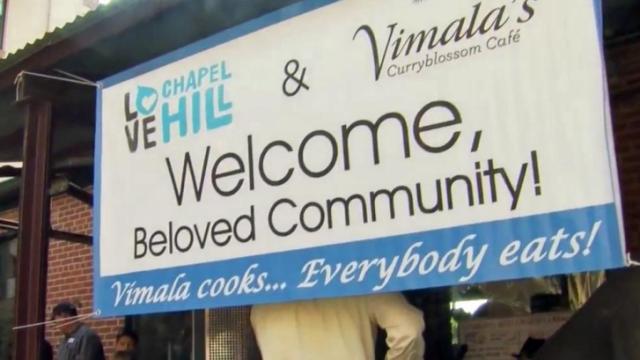 Chapel Hill, N.C. — President Donald Trump’s order banning travel from certain Muslim-majority countries sparked angry protests around the world. While the order is now on hold, it has many refugees already in the United States worried about their fate, but at one Chapel Hill restaurant, refugees are especially welcome.

Nobody in line at Vimala’s Curryblossom Café had to pay for their food Sunday, when the owner opened the doors and her heart to customers.

“We’re going to come out of our homes, suspend all fears, judgement and assumptions and just get to know each other,” said owner Vimala Rajendran.

Rajendran is from India and has hosted three Refugees Welcome lunches since November, all against the backdrop of a new president and the now suspended travel ban for people from seven Muslim-majority countries, including Syria.

“There was terror, terror. Always fear,” said one refugeei of his life in Syria.

The man had escaped the civil war with his wife and six children. A relief organization sent them to the Triangle four months ago.

Through a translator, he said he feels at home in North Carolina.

Rajendran said she plans to continue hosting Refugees Welcome lunches every month. She gets help from Love Chapel Hill Church, where Matt LeRoy is a pastor.

Rajendran said she would continue hosting the lunches no matter who is president.

“Because the reason is, this is a response from the heart to love our neighbors unconditionally,” she said.

Rajendran said she prepared enough food to feed about 400 people. She handles all the expenses for the event, although donations are always welcomed.