Raleigh, N.C. — A team of researchers say a survey of the crowd at Monday night's "Moral Monday" protest shows that at least 311 of 317 of those surveyed are from North Carolina.

The protests, which have been led by the NAACP, have been organized to express opposition to a number of policies put forward by the Republican-controlled legislature. Spending on health care and changes to voting procedures have been staple targets of the protests, although Monday night's speeches focused on the environment and women's health.

During the past two weeks, lawmakers and other high-profile Republicans, including state party Chairman Claude Pope, have dismissed the protesters as "outsiders." That line has been refined in recent days to say that there are "outside influences" on the protests. In fact, groups such as the Washington, D.C.-based Advancement Project have helped provide organization and media outreach for protesters.

But Fred Stutzman, a Chapel Hill-based researcher who owns Eighty Percent Solutions, said he wanted to explore the question of whether the protests were an outsider movement or not. Stutzman acknowledged he was a participant in prior Moral Monday protests.

He and a team of six social scientists, most affiliated with the University of North Carolina at Chapel Hill but volunteering their services for the evening, set out to survey the crowd.

The ethnicity of those surveyed broke down as follows:

The survey results probably won't change very many minds about the makeup of the Moral Monday movement. But the numbers are consistent with what WRAL News found when it examined where those arrested during the protests called home.

"We've got conclusive evidence here that shows the Moral Monday protests area a home-grown movement," Stutzman said. He called the racial and age makeup of the crowd "representative" of North Carolina's population overall.

Stutzman also provided a map of where the North Carolina participants were from. 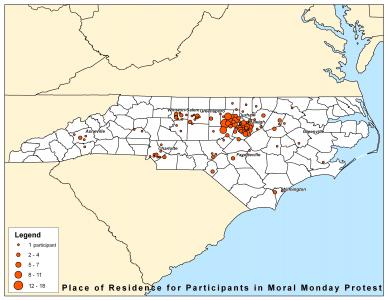