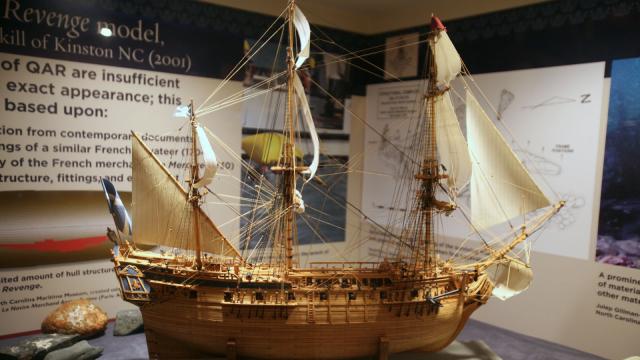 Greenville, N.C. — Archaeological conservators with a North Carolina Department of Natural and Cultural Resources lab in Greenville have discovered and preserved fragments of paper found on the wreckage of Queen Anne’s Revenge, the flagship of the pirate Blackbeard, officials said Thursday.

Sixteen tiny fragments of paper – the largest is about the size of a quarter – were discovered in a mass of wet sludge removed from the chamber for a breech-loading cannon recovered from the shipwreck off the North Carolina coast. Paper is an extremely rare material to find on shipwrecks, especially one 300 years old, because it usually disintegrates quickly in water.

Experts with the Queen Anne’s Revenge Conservation Lab worked with scientists from the department’s Division of Archives and Records, along with the Winterthur/University of Delaware Program in Art Conservation, to conserve the fragile fragments. During this process, they found printed text was still legible on some fragments. 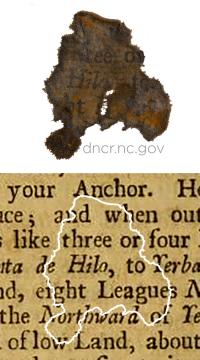 After months of research, the fragments were determined to be from a 1712 first edition of a book by Captain Edward Cooke, "A Voyage to the South Sea, and Round the World, Perform’d in the Years 1708, 1709, 1710 and 1711." The "voyage narrative" described an expedition made by two ships that sailed from Bristol, England, in 1708 and included the rescue of Alexander Selkirk from an island on which he had been marooned for four years. Selkirk’s story became the inspiration for Daniel Defoe’s 1719 novel, "Robinson Crusoe."

The historical record has several references to books aboard vessels in Blackbeard’s fleet but provides no specific titles, officials said, noting that the discovery of the fragments provide the first archaeological evidence for their presence on QAR.

The task of conserving, recording and documenting the fragments continues, and a display about the find is being planned as part of the department’s Blackbeard 300th anniversary events during 2018, officials said.