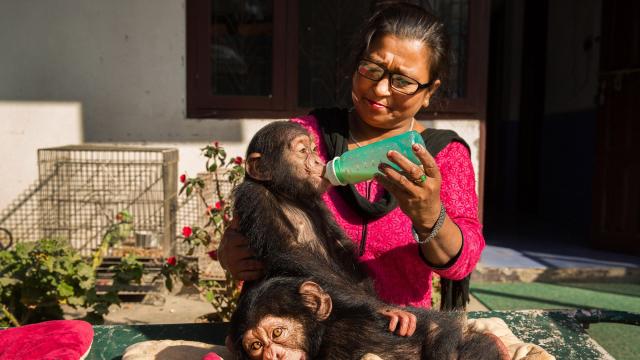 KATHMANDU, Nepal — A group of plainclothes investigators assembled outside an animal smuggler’s house in the Himalayas recently, waiting for signs of life.

Working off a tip that two baby chimpanzees were illegally passing through Nepal, the investigators burst into the building, where a menagerie of exhausted animals began to wail.

To get through airport customs, smugglers had stuffed the chimpanzees into the center of a giant trapdoor crate, surrounding them with cages containing dozens of parrots, pheasants and monkeys to disguise their presence. By the time the chimpanzees arrived in Kathmandu, the capital, from Nigeria, they hadlost nearly half their body weight and contracted pneumonia.

“It was difficult to get a sense that the chimps were even in the crate,” said Jeevan Kumar Shrestha, Nepal’s superintendent of police. “They could have died from suffocation.”

Nepal is emerging as a major hub for criminal gangs moving wildlife and animal parts around the globe. In recent years, authorities have arrested hundreds of smugglers who have taken advantage of Nepal’s porous borders with India and China, corrupt law enforcement and loose customs rules to illegally transport rhinoceros horns, wool from Tibetan antelopes and live, rare owls and endangered apes.

But for seized animals, problems continue after they have been intercepted. In Nepal, the two chimpanzees rescued Oct. 17 are now at the center of a spat between the Nigerian government, which is calling for them to be returned, and local wildlife officials, who have named the animals Champa and Chimpu and are trying to keep them at Nepal’s Central Zoo.

The Convention on International Trade in Endangered Species of Wild Fauna and Flora, a multinational treaty, states that authorities are required to send confiscated animals back to their country of origin or to an accredited rescue center.

But enforcement of the treaty is not easy, said Doug Cress, head of the World Association of Zoos and Aquariums, an organization that provides support to animal shelters. Most countries lack proper rehabilitation clinics for trafficked animals, he said, and for places that do have facilities, the cost of providing food and medical care to wildlife is high. He said repatriation could take years.

“Simply sending those animals back to the country of origin would be reckless,” said Cress, who has two decades of experience working with great apes.

Smuggling of endangered apes, some of the most intelligent animals on the planet, has become a multimillion-dollar business. Wildlife activists say thousands of gorillas, chimpanzees and orangutans are sold on the black market every year to unscrupulous zoos, as exotic pets and even to brothels.

Seized animals are sometimes needed as evidence to prosecute smugglers, which can lead to further delays in their return. That is the case in Nepal, where the police are holding the chimpanzees to help indict five trafficking suspects from Nepal, India and Pakistan who could each face up to 10 years in prison under a national law on organized crime.

The investigators, part of a sting operation called Wild Eagle, said the chimpanzees and more than 100 other animals had been shipped by Haruna Kago, a supplier affiliated with Yomu and Yami Travel Agency, a Nigerian company that manages a supply of birds and other animals in Istanbul and Doha, Qatar.

The animals had passed through Istanbul before landing at Kathmandu’s international airport, where investigators say that two of the men who were arrested, Mohammad Usman and Sanjib Bhari, divided a $6,000 bribe among customs officers to give the crate clearance. Both men run bird supply stores in Kathmandu.

The crate was then transported to Bhari’s home, where officials say the two men were joined by two smuggling suspects from India, Chandbabu Mohammad Shariff Sahid and Mohammad Faim. A fifth smuggling suspect, Jawaid Aslam Khan of Pakistan, was apprehended after he landed at the airport in Kathmandu.

Working off information provided by an informant who had embedded with smugglers in Nepal, police said the suspects had planned to transport the chimpanzees to India, which has become another hot spot for animal trafficking. Police said it was still unclear what they planned to do with the chimpanzees in India.

Gopal Prakash Bhattarai, the deputy director general of Nepal’s Department of National Parks and Wildlife Conservation, said Nigerian authorities had contacted him and asked for the chimpanzees to be returned. But he said the animals would remain in Nepal at least through the end of the investigation and that the Nigerian government needed to cover transportation costs for the animals.

Elizabeth Ehi-Ebewele, the deputy director of Nigeria’s Department of Forestry, confirmed that she had made the call, adding that the chimpanzees were needed for the country’s own investigation.

“I told Nepal that they should send them back to Nigeria,” she said by telephone.

Cress, the ape specialist, said DNA testing was still required to determine whether the chimpanzees were originally from Nigeria or from another country in Africa. He said a representative from his organization had visited Nepal’s Central Zoo this month to see the chimpanzees and that the group was trying to facilitate their release. He said the zoo was not equipped to properly care for them.

“Chimpanzees are highly intelligent, sentient and emotional beings, and often require round-the-clock care as infants, particularly those that have been through the trauma of wild capture and smuggling,” he said.

Zoo officials said they had other plans for Champa and Chimpu, the chimpanzees, who are both less than a year old and weigh slightly more than newborn babies. Over the years, as smugglers have been apprehended, the zoo has added an array of new animals to its collection, including falcons, owls and ring-tailed lemurs.

On a recent day, the chimpanzees were kept in cages on the grounds of a nursery, sucking their toes and peeling bananas. Staff members said that they fed the chimpanzees, a female and a male, every five hours. Fixed air-conditioning units regulate the temperature for the animals, who would typically live in the tropics.

Ganesh Koirala, an assistant curator at the zoo, said he was ecstatic about the newest additions, noting that the last time the zoo had chimpanzees was in 1974, when a pair given by the United States in exchange for four red pandas died. He bristled at the idea of returning the chimpanzees to Nigeria, saying an exhibit was already being planned for them.

“Everybody wants to see our ancestors on display,” he said. “We will protect them.”