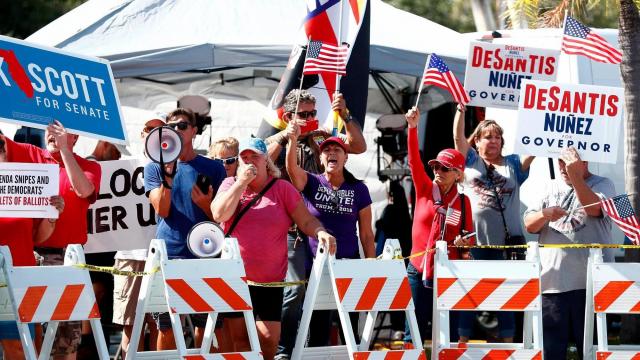 (CNN) — As Republicans seek to cast doubt on the election process in Florida, and Democrats level increasingly heated charges in return, a judge on Monday called on both parties to turn down the temperature.

The Florida judge overseeing the lawsuit by Republican Senate candidate Gov. Rick Scott against South Florida elections officials warned lawyers on both sides of the fight to cut it out.

"I am urging, because of the highly public nature of this case, to ramp down the rhetoric. If someone in this lawsuit or someone in this county has evidence of voter fraud or irregularities, they should report it to local law enforcement," said Broward County Chief Judge Jack Tuter. "Everything lawyers are saying out there is being beamed out all over the country."

Nearly a week after Election Day, Florida politics has been consumed by the recount, with both parties dispatching high-priced lawyers and hordes of volunteers to monitor the laborious process. Much of the focus has been the state's US Senate race, where just over 12,000 votes separate Scott and incumbent Democratic Sen. Bill Nelson. But recounts have also been initiated in the races to be the state's next governor and agriculture commissioner. And the situation has escalated recently, with fiery rhetoric flying from state and national politicians looking to frame the debate as state and county election officials recount votes in offices and nondescript industrial buildings.

Republicans, including Scott and President Donald Trump, have in recent days alleged that there is "fraud" in the election process, despite repeated denials from the Florida Department of State. The Florida state Democratic Party, meanwhile, has compared Scott to a dictator.

The war of words between Scott's and Nelson's camps has escalated alongside increasingly testy exchanges between demonstrators, all while the clock is ticking toward a Thursday deadline. At the same time, Republicans and Democrats are mounting a furious legal and public relations battle through the media and judicial system.

Even as his race is bogged down in Florida's recount, Scott is planning to travel to the nation's capital this week as part of his transition to the US Senate, according to a senior Scott campaign official.

"Senator-elect Scott will be traveling to DC this week to participate in some new-member orientation activities, including the photo, and will be voting in leadership elections," the official said.

Nelson on Monday called on Scott to recuse himself from the recount.

Scott "should remove himself from any role in the recount process so the people can have confidence in the integrity of the election," Nelson said in a video statement released by his campaign. "Given his efforts to undermine the votes of Floridians, this is the only way that we can ensure that the people's votes are protected."

After election officials spent the weekend casting doubt over whether they would be able to finish the recount by Thursday, there was newfound confidence on Monday in Palm Beach and Broward.

Susan Bucher, supervisor of elections in Palm Beach County, told CNN on Sunday that finishing the recount by the Thursday deadline was "impossible." But on Monday, she said she was "fairly confident" that the county would be able to meet the deadline for at least the US Senate race. The reason: The older ballot-counting machines in Palm Beach County are able to count only one race at a time, meaning that to do a full recount for the governor's race, election officials will have to redo the process.

"Right now," Bucher said, "we are just working on the US Senate race."

In Broward, Brenda Snipes, the supervisor of elections, told reporters that the county intends to meet the Thursday deadline.

As volunteers rushed to complete the legally mandated review, Scott again upped the stakes by suing to require law enforcement officials to seize ballots and tallying machines in Broward and Palm Beach counties during any break in the action.

Judge Tuter denied the initial motion in the Broward suit from Scott for an injunction seeking to impound machines and ballots. Instead, under the judge's supervision, the two sides agreed on three additional county deputies to assist the Broward division of elections on its recount. One officer will monitor onsite cameras, a second will monitor storage of USB drives and ballot boxes, and a third will manage the other two officers.

Scott and Trump have alleged, without evidence, that Democrats were conspiring to overturn the initial results. The President, alleging that "many ballots are missing or forged," tweeted Monday morning that "an honest vote count is no longer possible," and Scott accused Nelson of trying to "commit fraud to try to win this election."

"No ragtag group of liberal activists or lawyers from DC will be allowed to steal this election," Scott told Fox News on Sunday morning, shortly before he launched a trio of new lawsuits.

Florida Democrats reacted to Republican legal maneuvering by comparing Scott to a strongman striking out at the infrastructure of the vote.

"Rick Scott is doing his best to impersonate Latin American dictators who have overthrown Democracies in Venezuela and Cuba," the state party said in a statement. "The Governor is using his position to consolidate power by cutting at the very core of our Democracy."

Eugene Pettis, an attorney for controversial Broward elections chief Snipes, responded to the lawsuit by saying she had already secured the facilities.

"Dr. Snipes has taken multiple measures to make sure that the election machines and ballots are in safekeeping," Pettis said.

"I fail to see how the Florida Department of Law Enforcement can legitimately refuse to investigate where there is reasonable suspicion that may lead to the discovery of criminal actions in the conduct of the 2018 election," she wrote in a Sunday letter to the department, which has pointed to the Department of State's declaration that there is nothing to investigate.

Bondi also addressed the Department of State, asking the Republican-appointed secretary to dig deeper and, "when you find any indication creating a reasonable suspicion of potential criminal activity," report it to the law enforcement agency.

Sarah Revell, the communications director for the Department of State, replied to Bondi's letter by effectively repeating what the agency has been saying for days.

"Department staff continues to observe the administration of the election in Broward County," Revell said. "Our staff has not seen any evidence of criminal activity in Broward County at this time."

Nelson's campaign is also gearing up for a legal challenge that could, perhaps more than any recount, lead to a fundamental shake-up of the race. Its lawsuit, which alleges that the state law requiring that signatures on mail-in ballots match those on record is unconstitutional, will have a hearing in federal court on Wednesday.

"If we are successful, that will add thousands of additional ballots that have so far gone uncounted and we believe have gone uncounted in violation of the US Constitution's guarantee of the right to vote and should be counted," Marc Elias, Nelson's top recount lawyer, told reporters on Saturday night, adding: "We have sought a statewide remedy because we believe that all voters -- whether they voted for Sen. Nelson or for Gov. Scott -- should not be disenfranchised because an election worker doesn't believe that their signature in two different places are closely resembling."

More suits are likely as the week ramps up ahead of the 3 p.m. ET Thursday recount deadline. More would likely follow if a county fails to complete its review.

Palm Beach County GOP Chairman Michael Barnett told CNN on Sunday that the county's potential failure to meet the deadline would be "good news for Republicans because our candidates are ahead."

"If they're not able to meet the deadline, the secretary of state of Florida may go ahead and certify the elections for our candidates," Barnett said. "In that case, you can bet your butt there will be lawsuits filed everywhere."

Revell confirmed Barnett's prediction later Sunday, telling CNN that if a county does not submit new figures by Thursday afternoon, "then the results on file at that time take their place."

Sunday also marked a return to the spotlight for Democratic gubernatorial candidate Andrew Gillum, who is trailing DeSantis as the recount kicks into gear but revoked his concession a day earlier and plans to aggressively pursue any possible avenue -- including new legal action -- if rumors of unduly uncounted ballots persist.

Meanwhile, DeSantis has been very careful with his public posture in the wake of the recount. He has given only one statement, a taped video announcement directed to supporters, and has not held any events or press availabilities. Late Sunday, Scott's official schedule as governor was revised to include a note that he and DeSantis had met. Described officially as a "meeting with Gov-Elect DeSantis," it took place in Naples, where the two discussed the upcoming transition.