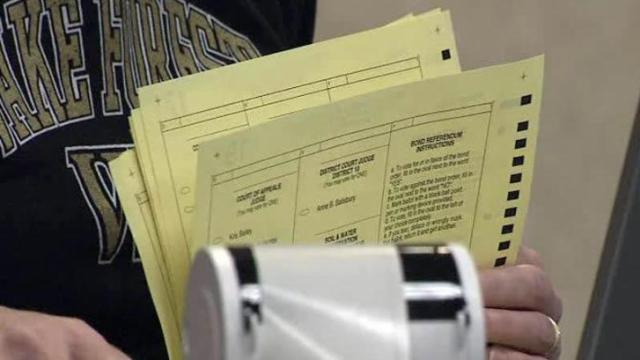 Four years ago, President Barack Obama's campaign used early voting to rack up a big turnout advantage against Sen. John McCain in North Carolina and elsewhere. As the Associated Press reports, the Republican National Committee and Mitt Romney's campaign are determined not to let Obama build that big lead again.

As evidence, the GOP points out they hold a nearly 2-to-1 advantage among the 128,668 voters who  requested mail-in absentee ballots as of Friday.

"We anticipate the state as a whole will vote somewhere around 60 to 70 percent early," RNC Political Director Rick Wiley said.

Wiley said that the early mail-in numbers were part of an overall "trajectory" that the GOP's ground was experiencing.

"In 2008, I don't think anyone thought it (North Carolina) was a battleground state until – I won't say it was too late, but it was probably too late. It was just one of those things where Obama in 2008 benefited from the protracted primary that they (the Democrats) had," Wiley said. That left the Democrat with a campaign infrastructure on the ground that Democrats never had to build.

This year, Wiley said, Republicans started building a campaign network before Romney's selection was assured. That work, he said, is showing up in the early voting numbers.

It is worth noting that according to Civitas' vote tracker application, the GOP had an even bigger lead among mail-in voters over Democrats at the same point before the election in 2008.

"They spent a tremendous amount of money on something that doesn't yield a lot of return," said Walton Robinson, a spokesman for the North Carolina Democratic Party.

It's important to know that 128,668 voters is about 2 percent of the 6.5 million voters in the state. In-person voting will be a much larger share of the electorate. Nearly 2.6 million people, or roughly 60 percent of those who voted, voted early in-person in 2008. Robinson said the "return on investment" for in-person early voting, which begins on Oct. 18, is better than on mail-in ballots.

However, only 29,446 of those 128,668 ballots had been returned as of Friday. Republicans still hold an advantage among that group, which breaks down this way:

The deadline to request a mail-in absentee ballot is Oct. 30. This coming Friday, Oct. 12, is the last day to register to vote in the November election.

Now, nothing requires a Republican voter to back Republican candidates when they vote, but Republicans see the lead in participation as a good omen.

"We're going to be doing the same thing the Democrats do, pushing people to these early vote locations and have the same kind of firepower on the ground, which I think is important and I think it was also lacking in 2008," Wiley said.

In a recent WRAL-Survey USA poll, 58 percent of those who said they would vote vial mail said they would back Republican presidential nominee Mitt Romney. By contrast, of those who say they'll vote early in-person, 59 percent say they'll vote for Obama. That could indicate the GOP lead in turnout won't last all the way through the early voting period.

For those craving some local data, here are the numbers of requested mail-in ballots and those actually returned by last Friday in Wake County: