Republicans launch fresh round of attacks on Cooper over SBI, crime lab 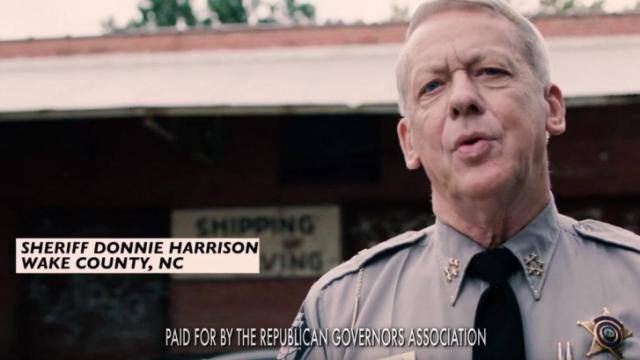 Raleigh, N.C. — Gov. Pat McCrory and the Republican Governors Association are unleashing a new pair of attack ads focused on Attorney General Roy Cooper's handling of the State Bureau of Investigation and the State Crime Lab.

Cooper, a Democrat, is running to unseat McCrory in the gubernatorial race. As of Friday morning, he's leading the Republican by 3.6 points in Real Clear Politics' polling average and by 2.2 points in the average compiled by Pollster, a product of the Huffington Post.

The RGA ad features direct-to-camera testimony from Wake County Sheriff Donny Harrison, Alamance County Sheriff Terry Johnson, Guilford County Sheriff BJ Barnes and Iredell County Sheriff Darren Campbell. Sheriffs in North Carolina are elected officers and are frequently one of the most powerful politicians in the counties they serve. All four sheriffs featured in the ad are Republicans.

"The SBI was taken away from Roy Cooper's authority," Barnes says in the ad, which largely rehashes accusations McCrory and his allies have made about the crime lab and the SBI during the campaign. Specifically, they point to the fact that lawmakers chose to move the SBI from the Department of Justice, which Cooper oversees, to the Department of Public Safety, which is run by a McCrory appointee.

A second ad by the McCrory campaign itself targets a claim by Cooper that he has fixed problems at the crime lab. It leans heavily on a volatile claim that rape kits have languished untested at the lab.

Although it can take months, if not more than a year, for the crime lab to process some cases, the reports the ad relies upon are often focused on cases where local law enforcement agencies have failed to turn rape kits over to the lab for testing.

"Governor McCrory has cost the state thousands of jobs and hundreds of millions of dollars over a law so extreme that even the ACC championship left," said Ford Porter, a spokesman for the Cooper campaign. "The McCrory campaign knows that voters are ready for a change, and now they are desperately playing politics with public safety. North Carolina families are safer because of Roy Cooper's leadership - and Pat McCrory's false attack ads don't change that."