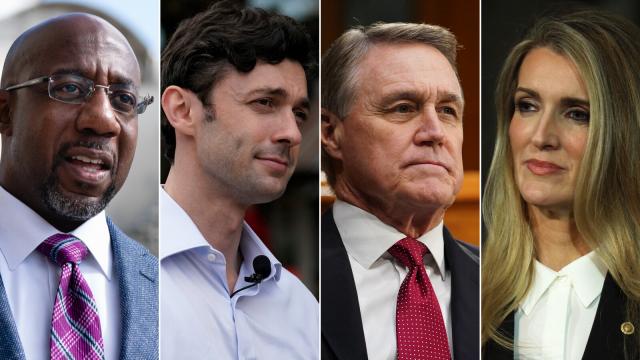 CNN — Republican Sens. Kelly Loeffler and David Perdue hold an early advantage over the airways in their two runoff races in Georgia that will determine the control of the Senate next year.

Political groups have already spent or reserved more than $126 million to advertise for the 63-day campaign, with Republicans exceeding Democrats $77.2 million to $49.3 million, according to Kantar's Campaign Media Analysis Group.

The campaigns wasted little time to influence the two crucial contests after Perdue and Loeffler failed to hit the 50% threshold on Election Day, setting up elections against Democratic challengers Jon Ossoff and Raphael Warnock on January 5.

Loeffler leads the pack, spending or reserving nearly $42 million in ads for her runoff race, compared to $24.4 million from Warnock. And Perdue has set aside $19.3 million, while Ossoff has marked $13.7 million for ads.

"The outpouring of support for Kelly Loeffler and David Perdue has been tremendous, but we have the fight of our lives on our hands," said Loeffler spokesman Stephen Lawson. "We need every single dollar, every single supporter, every single Republican vote because Chuck Schumer, Raphael Warnock and Jon Ossoff are stopping at nothing to radically transform our country into a socialist state."

The other campaigns did not comment on Wednesday. Warnock and Ossoff have dismissed Republican attempts to portray them as socialists as obvious falsehoods, and focused their campaigns on addressing the coronavirus pandemic, which has infected over 433,000 Georgians and killed over 9,000, according to Johns Hopkins University.

Republicans led the advertising battle in the general election with the aid of the Senate Leadership Fund, a Super PAC aligned to Senate Majority Leader Mitch McConnell. Loeffler, the co-owner of the WNBA's Atlanta Dream who is married to New York Stock Exchange chairman Jeffrey Sprecher, also spent $23 million of her own money in the general election, but she does not plan on spending any more in the runoff race, according to Lawson.

The latest ads in Georgia have highlighted the national implications of the two races. One Perdue ad begins with Senate Democratic Leader Chuck Schumer promising, "Now we take Georgia, then we change America!" Perdue then says he'd stop polices like defunding the police that both Democrats say they oppose. Meanwhile Ossoff is on the air with an ad saying he would work with President-elect Joe Biden to "beat this virus" and to "empower the medical experts, to rush economic relief for families and small businesses and invest in infrastructure to jumpstart our economy." Biden is projected to defeat President Donald Trump in Georgia, although a state recount is underway and Trump continues to baselessly dispute the entire presidential election's result.

Loeffler's ads are viciously negative. One questions whether "this" America -- showing a classroom of young students saying the pledge of allegiance -- will still be America "if the radical left controls the Senate." The ad then shows images of mobs, flashes signs saying "defund the police" and plasters a quote from a 2015 sermon Warnock gave after a police officer in Ferguson, Missouri, killed Michael Brown, in which he said some officers have a "gangster and thug mentality."

Warnock preemptively defended himself from Loeffler's attacks, airing an ad joking that his opponents would say he ate pizza with a fork, hated puppies and stepped on a crack in the sidewalk. He has also highlighted his life's arc from the housing projects in Savannah to Dr. Martin Luther King Jr.'s pulpit at the Ebenezer Baptist Church in Atlanta.

But Warnock has also sharply criticized Loeffler, charging that she profited from the pandemic, pointing to multi-million dollar stock transactions that she and her husband made after attending a senators-only briefing in January. Loeffler said she never used confidential information to make a profit, that third-party advisers bought and sold stocks on her behalf, and would divest from individual stocks.

Outside groups on the Left are starting to ramp up their activity. The Democratic Senatorial Campaign Committee, and the Senate Majority PAC, a Super PAC aligned with Schumer, are set to spend millions.

But they will be countered by other groups on the Right, including the Georgia Battleground Fund, a joint fundraising account formed by the National Republican Senatorial Committee and the GOP candidates, which recently named Republican strategist Karl Rove as its national finance chairman.

The campaigns moved quickly to get on the air before voting began. Georgia started to send out absentee ballots on Wednesday, and early voting starts on December 14.

Loeffler and Warnock will debate on December 6. That same day, Ossoff will debate an empty podium. Perdue declined to comment when asked by CNN on Wednesday why he's refusing to debate his opponent.

"I don't have any comments," said Perdue.