Republicans Hit Rock Bottom in New York. Can They Bounce Back? 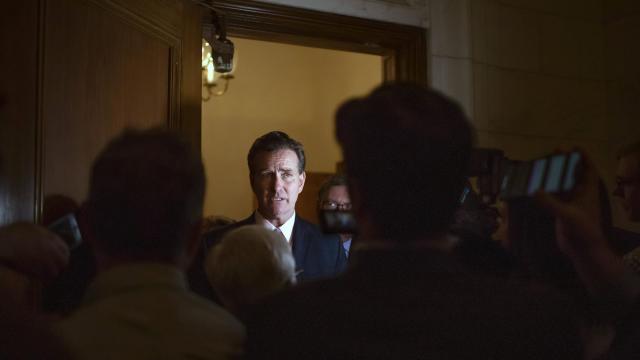 ALBANY, N.Y. — It is the party of Theodore Roosevelt, Nelson A. Rockefeller and, yes, President Donald Trump. It led the New York State Senate for almost all of the last 75 years. And its backers include such deep-pocketed, well-connected interests as charter schools and New York City real estate moguls.

But after an Election Day shellacking, the New York Republican Party has hit bottom. The party lost a whopping eight seats in the State Senate, evaporating its razor-thin majority, and got pounded by Democrats in every statewide race, extending a losing streak that dates to 2002.

The best that might be said for the Republicans was that they did not lose any ground in the State Assembly, where they are outnumbered by 64 seats. So come January, when the new Legislature is sworn in, not a single Republican in Albany will have so much as a committee chairmanship.

All of which makes any Pollyannaish take rather difficult.

“Someday the Republican Party might come back,” said Gerry O’Brien, a longtime Republican consultant from Brooklyn who recently changed his party registration to become an independent. “But, of course, someday we’ll also have flying cars and personal jet packs.”

The news on a federal level was no better. Democrats claimed victory over three Republican House incumbents, including Rep. Dan Donovan of Staten Island, leaving New York City without a single Republican representative. All told, 21 of the state’s 27 House members will be Democrats, as are both of its senators. (Sen. Kirsten Gillibrand easily won her second full term on Election Day.) And one of the six Republican House members — Chris Collins of the Buffalo area — is under federal indictment.

Such a wipeout, and the prospect of a long stay in the political wilderness, has left Republican loyalists trying to find a way forward and the state party chairman, Edward F. Cox, trying to explain his, and his party’s, dismal performance.

“It was a bigger wave than anyone expected,” Cox said in an interview last week. “There were red swaths across the state. But in the suburbs and the city, we really got hit.”

Indeed, the state’s electoral schism looks much like that of the nation as a whole, with every urban and many suburban areas solidly blue, and rural districts a deep red. But the math of that divide is bad for the Republicans: Residents of New York City, for example, which is overwhelmingly Democratic, make up about 40 percent of the state’s voters, spelling almost certain doom for Republicans running statewide in any year in which Democrats turn out.

That geographic split also prompted questions about whether the leader of Albany’s upper chamber, Republican Sen. John J. Flanagan of Long Island, could maintain his position amid calls for new leadership from upstate members and support for Sen. Catharine M. Young, from western New York.

Flanagan summoned the remaining 23 Republican members to the Capitol on Friday for a vote, despite a strong snowstorm. Flanagan prevailed, but the 14-to-9 tally was indicative of fissures in his weakened ranks.

Cox’s leadership of the state party has also been questioned by some, though he said he was committed to staying in his role.

Consultants in both parties agree that the state’s most famous Republican, Trump, is making life difficult for that party’s candidates in state and local races by turning off independent voters.

“His brand of sleaze has totally turned off anybody who ever might even consider voting for Republican,” O’Brien said.

William F.B. O’Reilly, a consultant to Marcus J. Molinaro, the Republican candidate who was trounced by Gov. Andrew M. Cuomo, agreed about the Trump effect.

“He’s a devastating factor in New York and New England and other largely blue states, but he won’t be there forever,” he said.

To that end, O’Reilly and other Republican strategists say the party needs to embrace its role as the opposition and see the losses as an opportunity return to bedrock, bankbook issues like lower taxes and job creation, fiscal oversight, and reining in government spending.

O’Reilly would also push for the party to embrace ideas like right-to-work legislation and term limits, and to take hard looks at public-service pension costs.

“They may go down in the flames in the Legislature, but at least you’re talking about issues,” O’Reilly said.

Other consultants note that the party needs to build up its grassroots operation, something that progressive groups did successfully in 2018, while finding true believers to raise big money to compete with Cuomo’s ample fundraising operation, as Republicans’ traditional institutional donors, like real estate interests, will want to back winners.

“Pick races we know we can win and show we can win,” he said. “And with that comes the belief we can get things done.” Overall, Democrats outnumber Republicans more than two to one in New York, and heavy turnout helped Democrats prevail in tight Senate races in suburban districts that had been bastions of moderate Republicans. On Long Island, Sen. Kemp Hannon, a 29-year incumbent from Nassau County, and Sen. Carl Marcellino, who had represented a district straddling Nassau and Suffolk counties since 1995, lost their seats.

Elaine Phillips, elected in 2016 to represent the 7th District in Nassau, also was defeated. The party lost an additional battle for an open seat in the 3rd District in Suffolk. Those losses were echoed in other parts of the state: There were two in the Hudson Valley and one each in the Catskills and in Brooklyn, where Sen. Martin J. Golden, an eight-term incumbent, was ousted.

“Those are the kind of things that were developed during the campaign,” he said. “And we’re going to keep that up.”

Cox also hoped that the Democrats — whose last stint as a majority party in the Senate dissolved into chaos — would prove to be their own worst enemies.

“There’s a sense now that they have complete power in Albany,” he said. “They blew it once; they’ll blow it again. History doesn’t repeat itself, but it rhymes.”