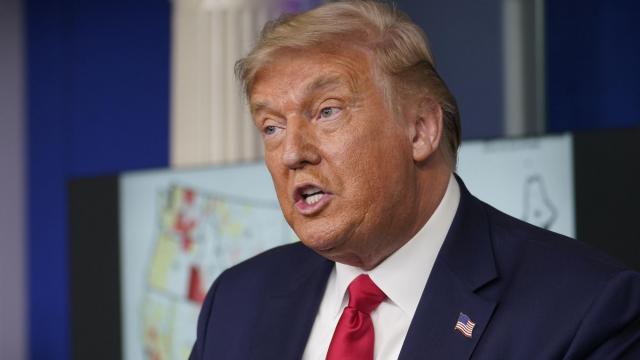 WASHINGTON — For Senate Republicans, it’s now all about self-preservation.

As their grip on the Senate majority teeters while President Donald Trump’s political standing plummets, their fate could well be determined by their ability to produce a sweeping pandemic recovery package before the election. But their frantic attempts to do so have so far produced little more than deep division in their ranks and with Trump — not the place they wanted to be 100 days out from a decisive race.

Their uncertain fortunes appear to have stiffened Republicans’ resolve to do something they rarely try: distance themselves, however gingerly, from Trump. They have jettisoned the president’s call for a payroll tax cut, drawing a resentful response from him on Twitter.

“The Democrats have stated strongly that they won’t approve a Payroll Tax Cut (too bad!)” Trump wrote, adding, “The Republicans, therefore, didn’t want to ask for it."

In truth, it was Republicans who were not interested in a tax cut they saw as ineffective.

They rejected the administration’s plan to omit money for coronavirus testing — an effort many senior Republicans see as crucial to reopening the country and stabilizing the economy — and to defund schools that fail to resume in-person classes in the fall. And on Thursday, they were resisting Trump’s attempts to use the measure as a vehicle to address one of his longtime obsessions: the FBI’s Brutalist-style headquarters in downtown Washington, situated across the street from his luxury hotel.

Republicans said they were nearing agreement on a $1 trillion package that would be introduced on Monday, but the tortured process that they went through to get there has weakened their negotiating hand relative to Democrats, who are pressing for a $3 trillion plan. And it has dramatized the growing divergence between their interests and Trump’s instincts.

Even as they privately haggled over the aid bill on Thursday, Republicans publicly defied Trump on another matter, voting for the annual military policy bill that he has threatened to veto over its requirement that the Pentagon rename bases named for Confederate figures. Many Republicans believed his stance was out of step with public opinion amid a nationwide conversation about racism in the United States.

The immediate challenge for Republicans is to produce an economic recovery plan before the expiration, in fewer than 10 days, of extra jobless benefits that tens of millions of Americans are living on. After days of promising to unveil their starting point for talks, Senate Republicans exited steamy Washington on Thursday afternoon with little to show for days of backroom dickering — an embarrassing failure given the short time remaining before a planned August recess. At the weekly lunch before they headed out, senators said they talked more about the crab bisque and alligator sausage provided by Sen. John Kennedy, R-La., than the political stew in which they found themselves.

One problem is that virtually everyone has his or her own idea about the best way to proceed, and some feel shut out of the talks altogether.

“I think there’s a range of opinions out there,” said Sen. Lisa Murkowski, R-Alaska. “And that’s why this process is frustrating, because you’re not really allowing all 100 of us to get into that great messy deliberation — and it is messy.”

Sen. Mitch McConnell, R-Ky., the majority leader, has made it painfully clear to his colleagues that any final legislation has to be acceptable to most of them, the White House and Democrats in the Senate and House, where Speaker Nancy Pelosi has already pushed through a measure three times as large as the one Republicans are considering.

That spread is driving off some Senate conservatives who fear that McConnell and Treasury Secretary Steven Mnuchin are preparing to give away the store to appease Democrats. Sen. Ted Cruz of Texas, among others, suggested that Republicans should just stand pat, declining to agree to additional spending. The more Republicans who choose to do so, the more heavily McConnell will need to rely on Democratic votes to pass the package.

The idea that Republicans should do nothing more on the pandemic before the election appears to be a minority view among Cruz’s colleagues. Many others recognize that embattled incumbents like Sens. Cory Gardner of Colorado, Martha McSally of Arizona and Thom Tillis of North Carolina can hardly return home to campaign through August and tell tens of thousands of anxious jobless voters that, sorry, the expanded unemployment benefits have run out and, no, schools will not be receiving the extra money educators say they need.

Republicans recognize the gravity of the situation, even if they appear stuck for the moment.

During a private party lunch this week, Sen. Tom Cotton, an archconservative from Arkansas, said Republicans should listen to what their colleagues who are facing the voters in November are hearing from constituents and try to accommodate them, even if it is costly. Should Republicans fail to deliver, Cotton warned, then Democrats are likely to win the White House and take over the Senate and ultimately enact something much more expensive and unacceptable to Republicans. Despite the apparent lack of progress, administration officials said they remained confident that they could eventually come to an agreement.

“Those deadlines, as you well know on Capitol Hill, always work magic in the eleventh hour,” Mark Meadows, the former Republican House member from North Carolina who is now White House chief of staff, said after meeting with McConnell.

But if Republicans believe they can run down the clock and then try to force Democrats into taking a less generous deal, they may be mistaken. Democrats think they have significant leverage in the negotiations and hold the political upper hand. They have shown recently that they are not afraid to block a Republican plan and let the public know they found it insufficient.

Some Republicans do not relish the prospect of getting jammed at the last minute either, “You’re delivered the deal and so much of it is, is it a take it or leave it?” Murkowski said. “That’s not really right either.”

Republicans are well aware that no matter what is in the final package, they probably will not receive much credit for producing another round of pandemic aid, and instead will draw criticism from conservatives for spending too much and from progressives for not doing enough. But the alternative is even more politically dangerous as they fight to retain their majority.

Polls already show that public dissatisfaction is rising about Republicans’ handling of the pandemic.

“Far too many families are continuing to face serious health care and economic challenges,” McConnell said Thursday. “So Congress’ support for our people must continue as well.”