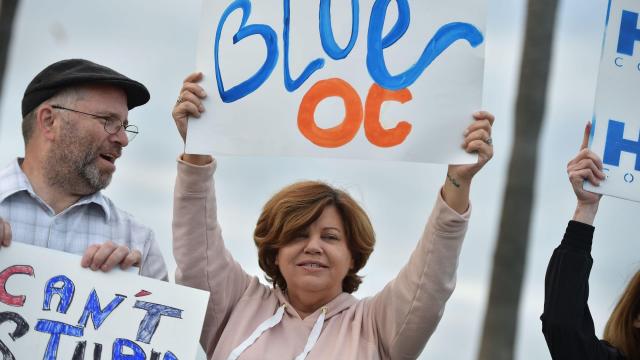 (CNN) — It was where "good Republicans go to die," Ronald Reagan often quipped.

Now, with the final ballots counted, Democrats have achieved a total takeover of congressional seats in the one-time Republican bastion of Orange County.

Across the country on Election Day, Democrats shifted the balance of power in the US House by capturing the college-educated suburbs once dominated by Republicans. But there is no pocket of America where the erosion in GOP support is more striking than Orange County.

Laboring against a strong tide of disdain, and even disgust, for President Donald Trump, Republicans lost their grip on the wealthy enclaves along the coast in northern Orange County that comprise the district held by 15-term Rep. Dana Rohrabacher. They lost by a much larger margin along the coast farther south in the district of retiring Rep. Darrell Issa, which includes the San Clemente home where Richard Nixon holed up to write his memoirs after resigning from the White House.

On the days leading up to Election Day, GOP officials had been slightly more optimistic that they would hold the inland Orange County district represented by GOP Rep. Mimi Walters, who had served as the deputy chair of the National Republican Congressional Committee in Washington. But Walters conceded to her rival, UC-Irvine law professor and Elizabeth Warren protégé Katie Porter late last week after the latest batch of ballots counted by election officials made a GOP victory seem impossible.

The last of the four seats to fall was California's racially-diverse 39th District in northern Orange County. Republican Young Kim, an immigrant from South Korea who highlighted her family's journey to America, was one of the GOP's best hopes for reflecting the growing diversity of a district that is more than a third Hispanic and 31% Asian.

But Kim conceded to Democrat Gil Cisneros late Saturday night in their race for the open seat of retiring GOP Rep. Ed Royce.

"We are seeing a realignment with college-educated voters and Orange County is ground zero for this phenomenon," said Sean Clegg, a California-based Democratic strategist who advises US Sen. Kamala Harris and California Governor-Elect Gavin Newsom. "This election was a clear referendum on Trump and Trumpism and people want the reality show to end, particularly suburban women."

The Democrats' success in flipping all four seats from red to blue is a stunning development for a county that served as the North Star for Reagan-style conservatism.

"The cataclysmic losses in Orange County are the manifestation of changing demographics that have been in motion for a couple decades. Trump has accelerated the political consequences the GOP," said Rob Stutzman, a California-based Republican strategist, noting that the lesser-known GOP candidate for governor, John Cox, is still winning the county by a slender margin, according to the latest results posted by the Orange County Registrar of Voters.

"That's good evidence that the congressional losses are a Trump effect," said Stutzman. "The GOP can compete to win those seats back in two years and new district maps in 2022 will possibly yield a clear GOP seat. The 'Orange Curtain' has fallen but Republicans will still compete in Orange County for the next few election cycles. They'll be more likely to succeed without Trump on the ballot."

Fred Smoller, an associate professor of political science at Chapman University in Orange County, noted that the GOP now has a 1% registration advantage in the county, compared to a 22% advantage in 1990.

"The Republican Party has taken a serious hit in Orange County, but it has not collapsed," Smoller said in an email. "The congress folks who won -- Levin and Cisneros -- got their winning margins in San Diego and Los Angeles counties. (The Congressional districts overlap OC). Republicans control the Board of Supervisors, the District Attorney's office, Sheriff, and most city councils."

Still the sting of the losses was pronounced because of the region's history. Orange County was the place that fostered the conservative movement driven by the John Birch Society in the 1960s.

Orange County activists powered the passage of Prop 13, which limited property taxes, and later the passage of Prop 187 -- the 1994 ballot measure that would have barred immigrants from getting basic state services. That measure, which was ultimately struck down by the courts, irrevocably shifted Latinos in California toward the Democratic Party.

This time Orange County voters revolted against the racially-tinged and misogynistic rhetoric of Trump. Well-liked incumbents like Walters labored against Trump's villainy of immigrants and the migrant caravan and his suggestion that he could alter birthright citizenship.

Moreover, the Republican tax bill became an albatross for Walters and Rohrabacher because of the way it altered state and local deductions -- a blow to homeowners in a county where the median home price is now beyond $715,000.

It remains to be seen whether Republican losses in the white-collar suburbs of Orange County mark the death knell of establishment Republicans, or if the losses after Trump's hostile takeover of the party alter the calculus in 2020.

But the possibility that "Orange is the new blue," as Newsom and his Democratic colleagues like to say, marks a stunning transformation for the region and a chilling sign for the establishment wing of the Republicans Party.

Reagan delighted in making his "good Republicans" quip at fundraisers before GOP donors.

At one event where he made that joke in Anaheim in November 1986, the then-President also noted how essential Orange County had been to his own success (in his run for governor) and the success of the party.

"Everything we've accomplished since then in Sacramento and, yes, in Washington began with that margin of victory provided here in Orange County," Reagan said.

After just one cycle of Trump -- and decades of demographic changes that weigh in Democrats' favor -- the Republican Party is now watching all that work unravel in the place where it began.