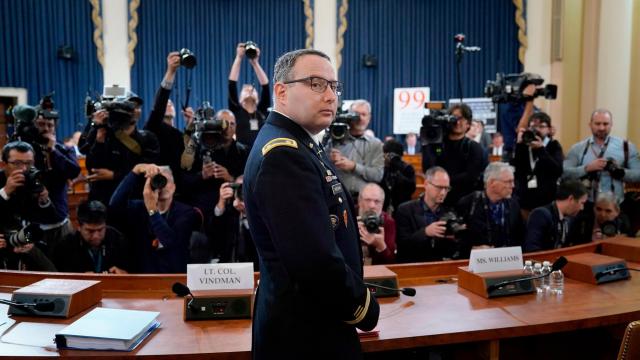 Over a series of tweets, Blackburn, a Tennessee Republican, made the unfounded claim that Vindman had leaked knowledge of President Donald Trump's phone call with the Ukrainian President to the whistleblower whose complaint initially prompted the investigation, called him "vindictive" and said he wasn't a patriot.

"Adam Schiff is hailing Alexander Vindman as an American patriot," Blackburn's Twitter account posted at about 4 p.m. ET on Thursday. "How patriotic is it to badmouth and ridicule our great nation in front of Russia, America's greatest enemy?

Later, at about 6 p.m. ET, she added, "It makes sense that Alexander Vindman leaked the July 25th phone call to his friend (aka the 'whistleblower'). They both have lots in common." CNN is not identifying the whistleblower, but there is no evidence that Vindman or the whistleblower knew each other or held any political motivations.

The Tennessee Republican accused both individuals of having "held the same NSC job," being "liberals who worked under Obama" and having "wanted to take out Trump."

It is unclear whether Blackburn or her staff sent the tweet as it posted during oral arguments in the Senate impeachment trial, which bans members from using electronics. She tweeted again about Vindman at about 8 p.m. ET on Thursday.

Vindman, who received his Purple Heart after being injured by a roadside bomb in Iraq, told lawmakers in November that Trump's push for Ukraine to investigate former Vice President Joe Biden on a July call was "inappropriate," and he knew "without hesitation" that he had to report it.

David Pressman -- Vindman's attorney and a former ambassador to the United Nations for special affairs -- slammed Blackburn's tweets in a statement.

"That a member of the Senate -- at a moment when the Senate is undertaking its most solemn responsibility -- would choose to take to Twitter to spread slander about a member of the military is a testament to cowardice. While Senator Blackburn fires off defamatory tweets, Lieutenant Colonel Vindman will continue to do what he has always done: serve our country dutifully and with honor."

CNN previously reported that standard operating procedure suggests that Vindman would have been listening in on the call. Vindman's testimony gave Democrats evidence of a quid pro quo linking a one-on-one meeting between Trump and Zelensky to the opening of investigations into the President's political rivals.

The issue of whether Vindman knew the whistleblower came up during his testimony when California Rep. Devin Nunes, the top Republican on the House Intelligence Committee, asked Vindman with whom he spoke about the July 25 call.

Vindman testified that he spoke to his twin brother, an NSC lawyer, State Department official George Kent and an unnamed official in the intelligence community.

When Nunes demanded to know who that official was, Democratic House Intelligence Committee Chairman Adam Schiff cut him off and decried any GOP attempts to "out the whistleblower."

Vindman said that the official was "a properly cleared individual with a need-to-know (security clearance)."

Vindman said he was advised by his counsel not to answer questions about specific members of the intelligence community, and Schiff would not allow the question.