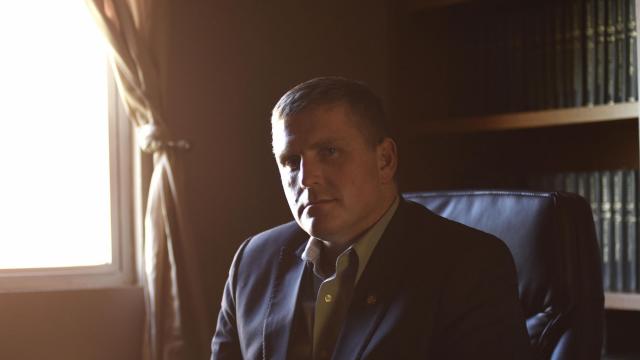 MUSKOGEE, Okla. — The mailers arrived in people’s homes mysteriously, hitting some of the most conservative lawmakers in Oklahoma.

George Faught, a hard-line Republican running for his sixth term in the Oklahoma House, was attacked for not being a true conservative. Another Republican incumbent had a flyer accusing him of “working to expand Obamacare.” The men called each other, sharing notes: Who was doing this?

By the time they found out, nearly all of them had lost in primary runoffs in August. The campaign against the hard-liners, they discovered, was coming from inside the caucus.

“Once you cut out the cancer that was attacking us, we’re now in a position to heal and move forward,” said state Rep. Chris Kannady, a moderate Republican who has gone public as the ringleader of the internal purge, which he called the Project.

Oklahoma in 2018 is as close as you get to a one-party state. President Donald Trump won by 36 points two years ago, taking every county. Republicans have supermajorities in both houses of the Legislature. They hold every statewide office and all the congressional seats.

A blue wave is not expected here, but there are signs of an awakened Democratic Party. In a congressional district that includes most of booming Oklahoma City, a Democratic challenger has substantially outraised the Republican incumbent.

Even tighter is the governor’s race, which is close enough that the Democratic Governors Association has jumped in. The Democrat, Drew Edmondson, has a last name that goes back decades in state politics but is in a party completely out of power; he is narrowly trailing the Republican, Kevin Stitt, a Tulsa businessman with no political experience.

It is essentially a contest over who has the least to do with the current state government, which drew national attention last spring when teachers protested statewide over severely underfunded schools. When two parties are in charge, a run of bad news like this would set off a round of partisan blame-throwing. With one party, it can bring what one Republican lawmaker openly called civil war.

“Republicans thought they couldn’t lose and Democrats thought they couldn’t win,” John Feary, a moderate Republican, said of the last decade of Oklahoma politics. Feary ran in 2016 for a reliably Republican state Senate seat in the Tulsa suburbs; in a hint of things to come, he lost in the primary this year to a hard-liner — who went on to lose, in a shocker, to a Democrat.

“Sometimes,” Feary said, “something just has to fall apart before you can build it up again the right way.”

It is fair to say that things in Oklahoma had been falling apart. A plunge in oil prices caught up with years of tax-slashing and the results were ugly: cash-strapped school districts going to four-day weeks, prisons dangerously overcrowding and rural hospitals shutting down. The two-term Republican governor, Mary Fallin, shows up in poll after poll with approval numbers well below freezing, reliably among the least-popular governors in the country. As in Louisiana and Kansas, the fallout of fiscal austerity had spread quickly to politics.

Anti-incumbent anger swelled statewide but particularly in the cities, once the homeland of the Oklahoma Republicans. Democrats have won several statehouse special elections in Republican-held districts mostly around Tulsa and Oklahoma City. Similarly situated Republican seats are in danger in November, eyed by energized Democrats and disaffected moderate Republicans. Some school districts are scheduling a holiday on Tuesday for teachers and staff to vote, and women in ruby-red suburbs are working the phone banks for Democrats.

Meanwhile, the fail-safe switch near at hand for Republicans for eight years is no longer there to pull.

“You got elected because you weren’t Obama,” said Anthony Sykes, a conservative state senator, speaking of some of his hard-line colleagues. “But the Obama well went dry. And you’ve got to produce some results now.”

That a purge of hard-right lawmakers had even been considered is a function of the scale of Republican domination in Oklahoma. Long a minority party operating chiefly out of the Chambers of Commerce and Rotary Clubs of Tulsa and Oklahoma City, Republicans went on a partisan land rush over the past couple of decades, winning rural and small-town seats that had been in Democratic hands since statehood.

“When I got elected it was kind of a fluke,” said Faught, who in 2006 won a seat in Muskogee that had never been held by a Republican.

With ever-expanding majorities, longtime Republicans saw a chance to pass long-delayed priorities like tort reform, but the arrivals from the party’s new frontiers came with their own ideas. Lawmakers barely known by the party leaders were now in the headlines for forming a legislative caucus to stamp out the Muslim Brotherhood in Oklahoma or proposing to screen thousands of students for possible deportation.

This was messy but manageable in the good times. Then the fiscal emergency hit. Party leaders knew they had to come up with a plan, but a vote to raise taxes, already extremely difficult in Oklahoma, was proving next to impossible, even with a supermajority. In March, the House finally, and barely, managed to pass a tax package to pay for teacher raises. Nineteen Republicans voted against it.

“You had the governing Republicans versus what I call the ‘Let’s barely keep the doors open’ Republicans,” said Chad Alexander, a former chairman of the state Republican Party. “And the Democrats.”

Of those 19 ‘no’ votes on the tax package, only four are left running in the general election. The rest either ran into term limits, chose not to run or lost in primaries, defeated by fired-up teachers and the dark-money-fueled housecleaning of the Project.

Kannady insists that he was only acting in self-defense against primary challenges and that, with an array of business interests helping fund the operation, he was the only lawmaker involved. Both of the claims are hotly disputed by his Republican adversaries. Kannady did acknowledge, however, that the lawmakers who were targeted had long been considered trouble within the caucus.

“This group, all they really knew was the red button,” Kannady said. “They voted against everybody’s issues.” For all the ugliness of the primaries, Kannady concluded, the caucus is “stronger and more unified than it’s been since the Republicans have taken over.”

They are not so sure about that in Muskogee.

“War is made up of battles,” said Tom Montgomery, a Republican state committeeman in Muskogee and a strong supporter of Faught. “My boys lost some battles, there’s no other way of saying it. But I think the war is not won yet.” The Democrat in the race, Jack Reavis, a soft-spoken high school civics teacher, has a decent chance now. Some of his votes will come from Republicans fed up with the ideological rigidity of legislators like Faught. Some votes will come from Faught’s biggest fans.

“I could have probably voted a straight ticket if it wasn’t for that one race,” said Lisa McManus, a beekeeper in Muskogee who answers the door with a gun in her hand. Disgusted by the campaign against Faught, she has already voted in the general election, by absentee ballot, for Reavis.

A likely short-lived Democratic win would be a small cost to bear in the larger custody battle over the Republican Party.

This is, after all, a one-party state.