I recently posted some photos of WRAL's crew covering Hurricane Irene. Now, three of our reporters have agreed to share their amazing behind-the-scenes stories and hurricane coverage myths with you – both the good and the bad. Enjoy!

"The Myths of Hurricane Coverage"

1) Reporters enjoy being out in the elements ...
Being waterlogged, windblown and sandblasted is never fun. The older you get, the more these elements affect you negatively.
2) The WRAL rain gear is waterproof ...
It is not. The trick is layering something that IS waterproof beneath the jacket. I've learned the hard way.
3) Not having power is no big deal for die-hard reporters who cover hurricanes ...
Not having power is a big deal for EVERYONE. You realize that hot showers, hot food, clean laundry and communication with the outside world (television, computers, cellphones) are not overrated when you don't have them.
4) There's always plenty to report on after a storm has passed ...
If you are in an area where there is little or no damage, this is not the case, especially when you are faced with doing 14 live shots. This is when your gift of gab and your ability to tap dance on live television comes in handy. It also helps when lots of people are walking around that you can interview.
5) Like childbirth, you forget the pain when someone asks you to cover the next storm ...
You don't forget, but you do it anyway. Go figure. 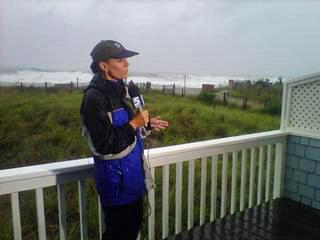 We are determined to get news on the air. On Monday, WRAL photographer Greg Clark and I returned for a second day to Rodanthe on Hatteras Island. Highway 12 was blocked from the north because of breaches in the island, so we hired Captain Bruce Erickson to take us across the Pamlico Sound on a skiff. Once on the island, we begged local residents for rides around to chronicle the damage. I’m always impressed by the kindness of people in the middle of crisis.

We then headed back to file stories and report live for the 5 and 6 p.m. shows. The sound was very smooth that day, but about a mile from Hatteras, we had a problem. Hydraulic fluid started spewing out of the outboard engine. A fitting blew out. The steering was shot. There was no way to guide the boat. A passing boat offered to tow us back to Hatteras. If we did that, we’d miss our deadline to get back. We had to get back.

Then, Greg came up with the idea. What if we unbolted the engine from the power steering? Greg tied a rope to the base of the engine. I pulled from one side and Greg pulled from the other to steer the engine. Capt. Bruce handled the throttle and the navigation while Greg and I played tug of war with the engine. It was a wobbly and exhausting ride yanking that engine for more than an hour across the Pamlico, but it worked.

Once on land, we hustled back over to north of the Oregon Inlet to report live on the Hatteras damage we saw. Viewers never knew about our adventure to make air. 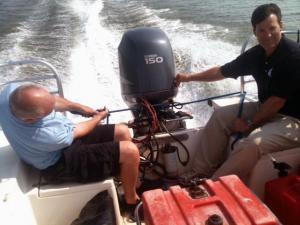 Some of my co-workers have really funny stories about their coverage of Irene (see Cullen Browder!) Photographer Pete James and I have certainly had some moments of our own. But, what's remarkable about this coverage isn't just the lengths our crews take to bring you the story.

I'm a Southern girl. I was raised by two parents who probably tried to make sure my first word was either "please" or "thank you." My brother and I had barely unwrapped a gift before our mom would hound us to write a thank you note. The community where I grew up in Georgia was so generous that you could count on a pound cake being delivered to your door at any hint of bad news. In short, I know Southern hospitality. However, what I've encountered on the Outer Banks is a whole new definition.

You see, I'm not sure how I would react if I'd lost my home, hadn't showered in days, and a reporter wanted to put me on TV. However, during all this coverage not one person has turned me down for an interview. Instead, the people of the Outer Banks opened what part of their homes they had left and shared their stories. One woman in Wanchese even invited me to stay in her home if I came back to cover future storms. That's just how generous and strong these people are. Without their help, Pete and I couldn't show you the storm's true impact.

I'd like to thank each person who trusted us to tell their story. Hopefully, my mom isn't reading this. She'd probably make me write a thank you note to every single person in the Outer Banks.