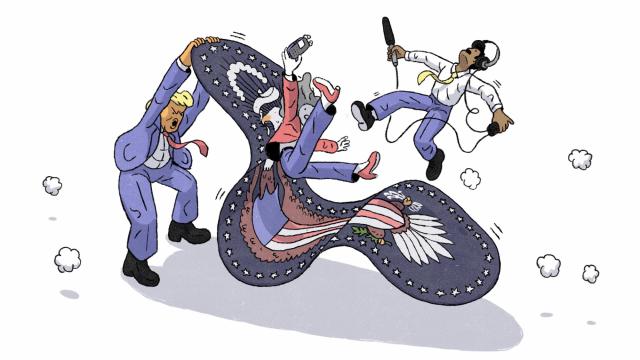 It was a subtle exchange, about 20 minutes into yet another clamorous White House press briefing, and a casual viewer of Wednesday’s proceedings would be forgiven for missing it.

But an unusual show of solidarity between rival journalists seemed to signal a new approach by the White House press corps toward an administration that regularly uses briefings to deride, and divide, the news media.

Hallie Jackson, a correspondent for NBC News, was grilling the press secretary, Sarah Huckabee Sanders, about President Donald Trump’s credibility, given his attempts at damage control after a Helsinki summit meeting with President Vladimir Putin of Russia.

“I’m going to keep moving,” she said, interrupting Jackson and turning to Jordan Fabian of The Hill. “Jordan, go ahead.”

Undeterred, Jackson said she had a follow-up question. “Sorry, you’ve asked two,” Sanders said, speaking over her. “I’m going to move on to Jordan.”

A brief silence fell over the room, before Fabian spoke up.

Covering the White House is among the most competitive jobs in Washington journalism, a fact that press secretaries are keen to exploit. Between the demands of story-hungry editors — and a shot at cable-news glory — few reporters pass up a chance to ask a question on live TV.

So Fabian’s gesture, which caught Sanders off guard, quickly resonated beyond the West Wing. Perhaps the moments of stonewalling from Sanders — and a notable recent drop-off in the frequency of the briefings — had generated a minor revolt in the press.

Jackson was granted her follow-up, asking Sanders to clarify when, as the press secretary had asserted, Trump was publicly critical of Putin. “I think by stating the fact that the president said that Russia interfered with our election, that’s a pretty bold call-out of another world leader,” Sanders replied.

The timing of the exchange was conspicuous: It occurred five days after a less-than-collegial moment between reporters at a presidential news conference.

Speaking in Britain last week, Trump declined to take a question from Jim Acosta of CNN, declaring his employer “fake news” and turning to John Roberts of Fox News, adding, “Let’s go to a real network.” Roberts asked his question without acknowledging the presidential slight. (Later, Roberts issued a statement saying Trump’s CNN comment was “unfair”; he did not mention Acosta.)

That moment has become a topic of heated discussion among White House reporters, who have privately debated how aggressively they should work together to get their questions answered.

Teaming up against Sanders might allow reporters to better parry her efforts to duck questions she dislikes. But a group revolt — which many Trump critics have yearned for — could also come across to viewers as pompous and self-serving. And it would likely further strain relations with a White House that is already stingy about doling out information useful to journalists and their audiences.

Still, no previous president publicly declared that the media was “the enemy of the people,” which Trump did as recently as this past weekend. And the president’s claim Tuesday, that he had misspoken in Helsinki about Russia’s role in the 2016 presidential election, struck many reporters as implausible.

Adding to the tension, Sanders used the start of Wednesday’s briefing to chastise the press corps again, accusing reporters of engaging in a “massive media hysteria” over alleged ties between Russia and the president. She cited an erroneous tweet by a reporter for Mic News — which was deleted, but not before it raced around social media — as evidence that the press “has gotten totally out of control.”

“You guys need to take a step back,” she said.

Then came the tag-team effort from NBC News and The Hill.

“I was just extending some professional courtesy,” Fabian wrote afterward on Twitter. “All of us in that room are simply trying to do our jobs, and it’s important the press corps be united around that mission.”

Jackson tweeted out her thanks. “Classy move,” she wrote. “Follow-up questions are a part of our jobs, and it’s helpful to be able to ask them.”