Southern Pines, N.C. — The relatives of a slain pregnant woman spoke out Friday, hours after police confirmed that they were not looking for any other suspects in connection with her death.

Brian Lovon Little, 18, of Rockingham, has been arrested and charged with first-degree murder and murder of an unborn child in the slayings of Aiyonna Clarice Barrett, 18, and her unborn baby. He was being held Friday without bond, Southern Pines police said.

Barrett's sister told WRAL News on Friday that Little was the father of Barrett's unborn child.

A memorial was planned for Saturday at Richmond County High School at 2 p.m. Her funeral was scheduled for Sunday at 3 p.m. at Popular Springs AME Church in Sanford. 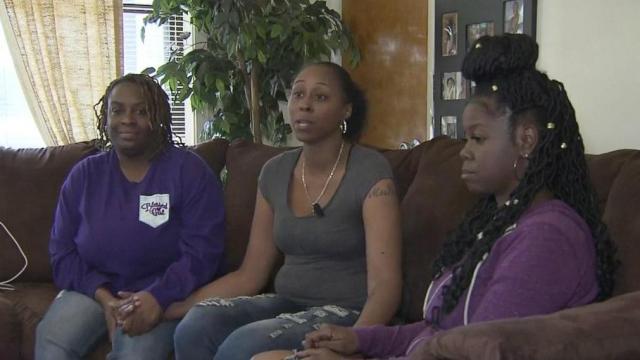 As they prepare to lay her to rest, Barrett's relatives are still coming to grips with her murder.

"You (at) close range shot my daughter in the back of the head, (and) you had sex with her the day before," said her mother, Ebony Gomez, referring to the man who has been charged with her daughter's murder.

Gomez said Little came to her house after the murder to comfort her.

"He came in, he cried, he hugged me," Gomez said. "You came with three other boys that never said 'I'm sorry.'"

Charlene Gomez was sewing a blanket for her granddaughter.

She said she can’t believe murder was the way Little decided to stop Barrett from having another baby.

"It's just a senseless murder," Charlene Gomez said. "If you didn't want to have the child or be a part of her life, then don't do anything. Just be gone."

Barrett was found around 8 p.m. Sunday inside a car on a dirt road near South Gaines Street, police said. Police have not officially confirmed how she died.

Barrett, who started the year as a senior at Richmond Senior High School in Richmond County before transferring to Southern Lee High School in Sanford, had big dreams and a great personality, her family said. She was set to graduate in June.

"She was 18, but her maturity was just ... she had it set up to where she'd be at her own place. She had a car. She was working. She'd enrolled in community college," said Ebony Gomez.