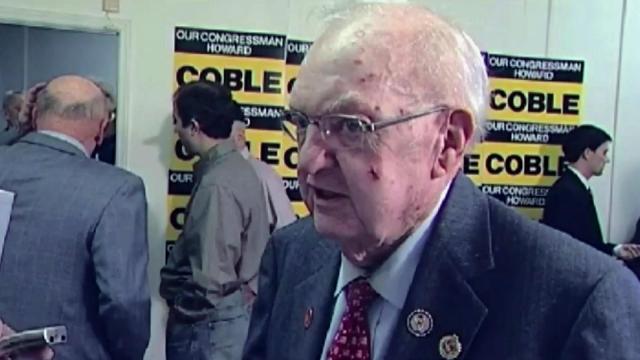 Greensboro, N.C. — Former 6th District Congressman Howard Coble, who served in the U.S. House longer than any other North Carolina Republican, died late Tuesday in Greensboro. He was 84.

Coble, who served for 30 years on Capitol Hill before declining to run for re-election in 2014, had been hospitalized since September after treatment for skin cancer and the removal of some lymph nodes, his nephew Ray Coble Jr. said.

"North Carolina not only lost a wonderful public servant and congressmen, but our state also lost a friend and mentor to so many, including myself," Gov. Pat McCrory said in a statement.

McCrory ordered all U.S. and North Carolina flags at state facilities to be lowered to half-staff through Thursday in Coble's honor.

A Greensboro native, Coble was perhaps best known in Congress for refusing to take a congressional pension in the name of fiscal conservatism and leading a subcommittee on intellectual property issues and the Internet as the Internet's influence grew exponentially.

A lifelong bachelor, he was considered a character from an era of old-school politics and focused less on ideology.

"In an era where our politics are too often characterized by excessive partisanship and animosity, Howard’s camaraderie, good humor, and generosity of spirit reflected the best of what this institution can be," Democratic 4th District Congressman David Price said in a statement.

Often seen wearing a fedora and mosaic sport jacket, Coble made his career by shaking hands with constituents in the 6th District, which most recently included several north-central counties, anchored by Greensboro.

He was proud of his accessibility to voters, noting that he had participated in more than 200 local Christmas parades and 200 Boy Scout Eagle Scout ceremonies. Coble said he always knew there was a short leash on members of Congress, who were up for election every two years.

"I held that seat, folks, subject to two-year leases, subject to revocation or renewal," Coble said during his 2013 announcement to retire. "Renewal's always better given that choice."

State Senate Pro Tem Phil Berger, who was among Coble's constituents, called him "a true North Carolina conservative who cared deeply for his constituents and usually knew them by name."

Republican Congressman Mark Walker, who succeeded Coble, said Coble was "one of a kind. He was a gentleman and one of the most sincere and kindest people I've ever known."

Coble had a long military and political career, including nearly 30 years in the Coast Guard. His last military assignment, which ended in 1982, was as commanding officer of the Wilmington Unit. He attended Appalachian State University and Guilford College and earned his law degree from the University of North Carolina at Chapel Hill in 1962.

His funeral will be held at noon next Tuesday at Westover Church in Greensboro. Visitation will be from 10 a.m. to noon at the church.