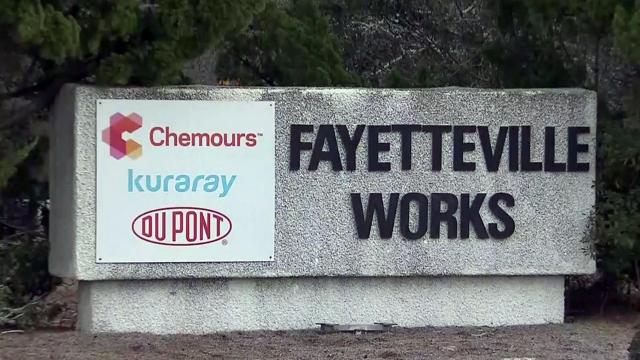 Raleigh, N.C. — Samples of water from the Cape Fear River near Wilmington's drinking water intake showed astronomically high levels of toxic chemicals from an upstream plant, according to a report published Wednesday by NC Policy Watch.

The samples were taken in 2015 by researchers at North Carolina State University and the U.S. Environmental Protection Agency but haven't previously been tested because researchers lacked the technology to accurately measure the levels of per- and polyfluoroalkyl substances, commonly called PFAS, according to the report.

The new tests show concentrations of PFAS at least as high as 130,000 parts per trillion, which is more than 900 times the level of 140 parts per trillion that state scientists have set as a health goal for a PFAS compound known as GenX.

"That’s the best estimate of what people in Wilmington were drinking for 37 years prior," N.C. State researcher Detlef Knappe told Policy Watch.

Chemours and its predecessor company, DuPont, have manufactured GenX and other PFAS for years at their Fayetteville Works plant on the Cumberland-Bladen county line, releasing the compounds into the air and water.

PFAS chemicals, which are used in non-stick coatings and firefighting foam, among other things, are unregulated. The compounds are hard to remove from drinking water, and some have been linked to cancer and other illnesses.

Chemours halted the release of GenX into the Cape Fear in the summer of 2017 after reports by the Wilmington StarNews sparked an investigation by state officials. But pollution downstream continued at lower concentrations due to air emissions, as well as residual groundwater and soil contamination.

"As troubling as these numbers are, they also may help explain a number of things, such as why we find still PFAS from Chemours and DuPont in raw and finished water we have analyzed," Vaughn Hagerty, spokesman for the Cape Fear Public Utility Authority, said in a statement to Policy Watch. "Or why we find their PFAS in our groundwater here in New Hanover County. Or the staggering concentrations of their PFAS in the groundwater under the Fayetteville Works, groundwater that regulators say migrates to the Cape Fear River. Or why researchers are confident that PFAS is in the miles of river sediment between the Fayetteville Works and our raw water intake."

The state Department of Environmental Quality and Chemours reached an enforcement agreement earlier this year that require the company to analyze PFAS and GenX contamination in sediment in the Cape Fear River, submit more frequent reporting of GenX air emissions, provide drinking water treatment for water fountains and sinks in public buildings downstream and provide maintenance on water filtration systems for at least 20 years.

"Beyond Chemours, DEQ is requiring publicly owned utilities with pretreatment programs and industrial dischargers in the Cape Fear River Basin to screen for PFAS compounds as part of a larger effort to detect and control PFAS pollution," DEQ spokeswoman Sharon Martin said in a statement to Policy Watch.