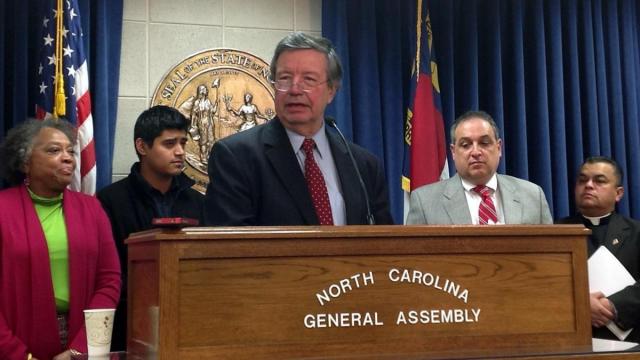 Durham, N.C. — Rep. Paul Luebke, a Democrat who has represented Durham in the North Carolina House of Representatives for 25 years, died Saturday night as a result of lymphoma.

Luebke was diagnosed with lymphoma last fall, but he was able to work in the General Assembly during the 2016 short session thanks to treatment. He had also returned to his position as a professor of sociology at the University of North Carolina at Greensboro.

"Paul had an unprecedented concern for working and marginalized communities and families," said House Minority Leader Larry Hall. "He always put them first in every public policy debate."

"Paul and I have been close friends and confidantes for nearly 40 years. Paul deserves immense credit for the progressive, diverse, welcoming nature of Durham," said Durham City Councilman Steve Schewel. "He is a chief architect of our city’s current political culture, and for 25 years, he has been our state’s unflinching progressive champion in the General Assembly, a north star for everything good. I will miss him terribly."

Luebke was running for re-election, and the Democratic Party in the 30th District will have to pick a successor for next week's election.

"Representative Luebke was a dedicated servant whose long career in education and in the General Assembly reflected his undeniable passion for serving his district and helping the people of North Carolina," Gov. Pat McCrory said.

"We are deeply saddened to hear of the passing of Representative Paul Luebke. He devoted his life and his career to educating and serving others," said North Carolina Democratic Party Chair Patsy Keever. "I had the honor of serving with him in the General Assembly, where he was a mentor to me. This is a huge loss for the state of North Carolina, and our thoughts and prayers are with Paul's family. He will be missed."

Luebke was surrounded by friends and family at the time of his death. He is survived by his son, Theo Luebke, as well as his father, granddaughter, brother and partner, Sherrie Cannoy.

"My father showed me what it means to live in a loving community that fights for things that matter," said Theo Luebke. "He taught me how to see the world and how to imagine a better one, how to organize and how to win. It has been one of the enduring blessings of my life to be his son."