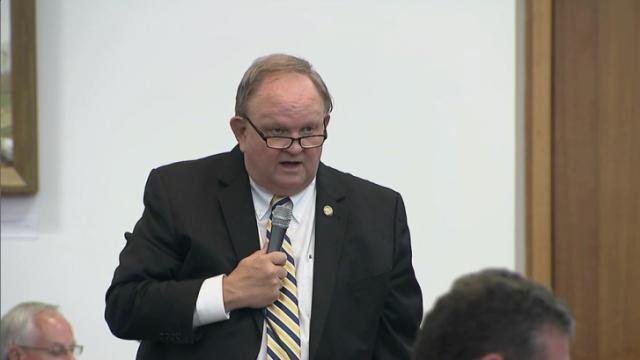 NOTE: The following revealing assessment of several key issues pending before the N.C. General Assembly in the days before closing, was posted by state Rep. Chuck McGrady, a Republican from Henderson County, a few hours after the legislature adjourned. McGrady's post on his website offered observations and insights rarely discussed or revealed about the points of contention that, in several cases, led to important and high profile legislation either dying for lack of action or passing amid last-minute compromises,

A few minutes before midnight last night (Friday, July 1), the General Assembly’s Short Session came to an end. It was a peculiar ending in that a local bill relating to the redistricting of the Asheville City Council seemed to trigger the legislature to just fold up its tent and go home.

The primary purpose of the Short Session is to address budgetary issues. The session was successful when the budget, enjoying broad bipartisan support, was adopted by the Senate by a vote of 36-14, and by the House by a vote of 91-22. The session turned out to be a truly “short” session with adjournment occurring earlier than in recent years. The legislature deferred action until next year’s Long Session on a range of controversial subjects.

My predictions about what would happen at the end were mostly correct, with one major exception.

Regulatory Reform
The surprise of the session, in terms of bills that didn’t pass, was the failure of the legislature to pass any regulatory reform bills. There were a host of such bills, Senate Bill 303 (Regulatory Reform Act of 2016), House Bill 593 (Amend Environmental & Other Laws) and HB 763 (Military Operations Protection Act of 2016), that were being considered by a conference committee. At a committee meeting that ended at nearly 1:30 a.m. on the last day of the session, it seemed that the conferees were close to agreement. All but a handful of issues were resolved, leaving House conferees sharply divided over an provision relating to the internet sale of alcohol by distilleries, with House conferees not fully supportive of a compromise on repeal of the ban on electronic devices in landfills, and no agreement on a new law regulating the installation of wind farms in the potential flight paths of military aircraft.

Being one of the conferees, I went to bed on the last morning expecting that those issues would be resolved and we’d pass another broad regulatory reform bill. It didn’t happen. Support for specific language related to wind farms and the military were late developing. The electronic recycling provision was controversial in the House, and many legislators, both Republicans and Democrats, just didn’t want to take up that issue feeling that it was a Long Session issue. Any legislation relating to alcohol is always controversial in the House, and some Republican Members just didn’t want to vote on the issue as part of a large, regulatory reform bill.

The Senate understandably felt that it had agreed to most of the House’s regulatory reform provisions and had made compromises in its proposals. When the House rejected two relatively minor bills put forward by senior senators, SB 897 (Asheville City Council Districts) put forward by the Senate Rules Chairman, Sen. Tom Apodaca (R-Hendersonville] and SB 46 (Jacksonville Occupancy Tax) put forward by the Senate Majority Leader, Sen. Harry Brown (R-Onslow), further negotiations on the three outstanding issues simply didn’t occur. The Senate refused to respond to a House offer to resolve one issue in the Senate’s favor, wind; to resolve one issue in the House’s favor, electronic recycling; and put the remaining issue in a separate bill to be voted up or down in the House, alcohol.

Farm Bill
The House and the Senate completed work on SB 770 (NC Farm Act of 2016). The Senate agreed to withdraw one provision creating an exemption for agriculture from permitting requirements for groundwater, while the House agreed to compromise language relating to an agriculture exemption from the State’s soil sedimentation law. The bill passed in the House by a vote of 89-26, and I supported the bill.

MAP Act Changes
HB 959 (DOT Protected Legislative Changes) passed by a vote of 90-17, and repealed the law that allowed the state Department of Transportation to reserve land for roads it planned to build in the future. The bill was a response to the NC Supreme Court decision finding that law unconstitutional. I supported the bill.

Coal Ash
After Governor McCrory vetoed SB 71 (Commission Appointment Modifications), legislative leaders entered into discussions with the Administration, and those discussions resulted in a new coal ash bill, HB 630 (Drinking Water Protection/Coal Ash Cleanup Act). I worked closely with Senate leadership on the bill, although I ultimately voted against it. The bill was good in that it provided water to households adjoining the coal ash basins and had a strong provision dealing with beneficial reuse of coal ash. The bill was unsatisfactory, in my opinion, because it will result in all of the largest coal ash basins being classified as low risk and likely capped in the place. Having no confidence in the Department of Environment Quality, I voted against the bill, although it passed by a vote of 82-32.

HB2 Fix
Much speculation focused on whether the General Assembly would make any changes to HB 2 ([Public Facilities Privacy & Security Act), the legislature’s response to a Charlotte ordinance which included a provision allowing transgendered people to use bathrooms of their choice. Unbeknownst to most of my constituents, much of my time over the past two months was spend in crafting various legislative options to address this issue, but that will be the subject of a different newsletter.

In the end, we passed HB 169 (Restore State Claim for Wrongful Discharge) which simply addresses a small piece of the controversy surrounding HB 2. Basically, it restores the state tort claim for wrongful discharge that apparently was repealed by HB 2. As reflected in the 85-15 vote in the House, this provision was largely noncontroversial. Probably some Democratic legislators voted against it because they didn’t think this bill was enough. Probably some Republican legislators voted against it because they’d pledged not to change HB 2. However, there was really no serious debate over whether the legislature should make this change. It was the change sought by Governor McCrory shortly after he signed HB 2 into law. My expectation is there will be more fallout from HB 2 in the coming weeks and month leading up to the November elections.

The last item of business for both chambers was the passage of the adjournment resolution, SJR 903 (Adjourn 2015-2016 Session). While the Senate voted unanimously to go home, the House split along party lines with all Republicans voting to adjourn and most Democrats voting against adjournment. The vote was 75 to 20. My guess is that the Democrats wanted a chance to vote on something more on HB 2.

Unless called back to override a gubernatorial veto of some bill passed late in the session, it is not expected the legislature will be back in session until the Long Session in 2017, which would begin in late January. Over a dozen legislators are retiring and some number of legislators will likely lose their seats in the November elections. The only constant is that things will change, and I’m expecting the Long Session — six months from now will bring its own challenges.