Raleigh, N.C. — ReOpenNC, a large group that held several protests when North Carolina was shutdown and more once it started reopening, gathered again in downtown Raleigh on Wednesday.

Co-founder Ashley Smith, who was arrested with three other people during one of the protests, spoke at 8:30 a.m. about why her group supports the impeachment of Gov. Roy Cooper from office.

"I was arrested for daring to step on a sidewalk, yet Cooper rolled out a red carpet for Marxist Antifa movements and rioters who destroyed our streets statewide," Smith said. "Where is the justice?"

At least 30 people were arrested in Raleigh for crimes on March 30 and 31 when peaceful protests turned to violent riots that resulted in property damage including broken windows, graffiti and looting from downtown to Midtown to north Raleigh.

List: Dozens arrested in Raleigh over three nights of protests

ReOpenNC members then took to the halls of the North Carolina General Assembly, stopping lawmakers before their 11 a.m. session. 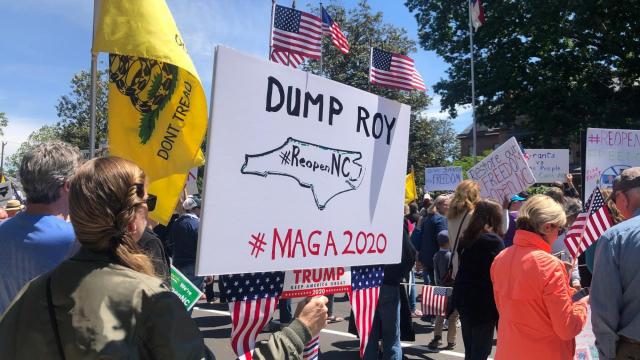 To impeach the governor, Republicans would need a lot of Democratic votes that they likely would not be able to obtain. Polls show that ReOpenNC's ideology is not popular among North Carolinians.

The group started a petition calling for the removal of Governor Cooper that has 5,500 signatures as of this morning. The uproar from ReOpenNC started with the governor announced a stay-at-home order to slow the spread of the coronavirus in the state.

Smith and ReopenNC have protested all the restrictions, raising concerns about damage to businesses and the economy, and Gov. Cooper exercising too much power during the pandemic.

"We are not seeing a governor that is working under the rule of law," Smith said.

Smith said that she does not believe Gov. Cooper will be able to be voted out of office because of corruption in the government, which is why she is advocating for impeachment.

"People, do not think we can just vote him out in November," she said.

At the last rally, ReOpenNC stood against the statewide mask mandate, saying it went against their American, constitutional rights. A decision will be made by July 17 to keep North Carolina in Phase 2 or move forward.

Experts say rise in known coronavirus cases shows a need to reduce crowding and person-to-person interaction. It's recommended that employees work from home, if possible, and schools are debating how to safely get students back to class in August.

On Tuesday, Wake County said more than 200 conventions, meetings and sporting events have been canceled so far, totaling a $110.4 million economic impact. At least 34 conventions, meetings and group sporting events were rescheduled, totaling a $17.9 million economic impact. Additionally, more than 100 large events and festivals have been canceled or rescheduled.

State and local health officials are urging people to avoid large gatherings, get tested for COVID-19, stay home if they feel ill or may have been exposed to the virus and remember the three W's -- wear a mask, wait six feet apart from others and wash hands frequently.