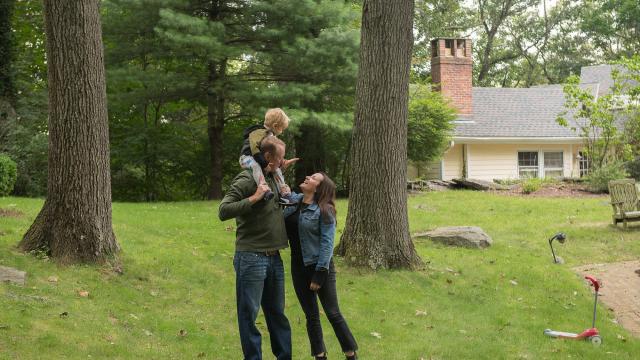 Aimee Raupp-Temple and her husband, Ken Temple, rented instead of buying a house when they first moved from Brooklyn Heights to Westport, Connecticut, three years ago, because they weren’t sure they were ready to fully commit to the suburbs.

“It was a big move — neither of us had ever lived in Connecticut,” said Raupp-Temple, 43, an author and acupuncturist.

Renting, it turned out, gave them time to figure out that they loved Westport. And yet, when their lease was up this year, they decided to rent again.

Temple, 46, works in finance, and he was convinced that home prices, already dropping, would continue to decline. “Our parents’ mentality was, you bought your home and that was your major profit place. Now, I think people are a little more cautious,” Raupp-Temple said.

In a real estate market tinged with so much uncertainty, renting at more than $5,000, $8,000 or even $10,000 a month feels like a safer bet these days to a number of people who could well afford to buy in the suburban counties of Fairfield and Westchester, where median sale prices in many towns are above $1 million. Indeed, demand for high-end single-family rentals is up significantly, a trend that dovetails with a decline in sales in New York and across portions of the region.

Many would-be buyers are adopting a wait-and-see attitude toward a market softened by uncertainty over the new federal tax law and general uneasiness about the economy, even as mortgage interest rates continue to rise. They are less concerned about shelling out so much money for monthly rent than about making a costly purchase they may later regret.

When the Temples and their young son first moved to Westport, they rented a four-bedroom, 3 1/2-bathroom home for just under $5,000 a month. The rent was no small sum, but in the city they had been paying more for less: $6,500 for a three-bedroom, two-bathroom apartment. Now they are waiting out the market in a rambling older home just over the border in Wilton, at $5,100 a month.

“There are so many other ways to invest and make money than real estate now,” Raupp-Temple said.

In Fairfield County, the volume of single-family rentals was up 13 percent in July compared with a year ago, according to data from the appraisal firm Miller Samuel. In Westchester County, it was up 9.6 percent.

Growth in single-family home rentals over the past few years has been most significant at the high end, agents said. The second-quarter market report from William Pitt/Julia B. Fee Sotheby’s International Realty cited “an exploding rental market” among high-end properties in the southern part of Fairfield County, in particular.

In pricey towns like Greenwich, New Canaan, Darien and Westport, homes at the lower end of that rental range tend to be older properties with three or four bedrooms and a decent-size yard. Those going for closer to $10,000 usually have at least five bedrooms, mint-condition amenities and large lots or a beach-area location. Westchester also showed growth in high-end rentals, but at a slower pace of just over 12 percent, and almost exclusively in the southern end of the county.

“I definitely see an increase in interest in rentals in the Bronxville area,” said Kathleen Collins, an agent with William Pitt. The cost to rent a home in the affluent square-mile village typically runs between $10,000 and $16,000 a month.

Nevertheless, Collins said she had been approached by more agents than usual this year asking whether properties she had listed for sale might instead be available to rent. In at least two cases where agents negotiated rental agreements with Collins, the clients were seeking rentals because they were relocating from abroad.

To meet this growing demand, more high-end sellers seem to be willing to rent, especially if they can’t get the sale price they want. The number of homes offered for rent at $5,000 and up in Fairfield County during the first half of the year was 25 percent higher than five years ago, according to data from William Pitt. In Westchester, inventory was up 18 percent.

Homeowners are opting to rent their homes out not just to wait for a stronger market, but also as a way to cut potential losses, said Jaime Sneddon, an associate broker with the New Canaan, Connecticut, office of William Pitt.

If a homeowner sells a primary residence for less than it was bought for, the loss does not qualify for a tax deduction. But if the homeowner rents the house for at least two years, it can be legally converted to an investment property for tax purposes, and any capital loss when it is sold can be written off against future income.

“Not everybody can afford to do that, but many of my clients have done it this year,” Sneddon said.

The growing demand for single-family rentals is sparked in part by concern about the financial impact of the new federal tax law, which caps income-tax deductions for property, state and local taxes at $10,000, said Jonathan Miller, president of Miller Samuel. Further fueling anxiety, he said, are the effect of rising interest rates and the “unclear economic policy” coming out of Washington.

“We’re going through this era of uncertainty,” Miller said. “And what do buyers do when the near-term seems uncertain? They pause.”

In towns where prices have been falling over the past year, there is simply no sense of urgency among affluent buyers, agents said. In New Canaan, for example, where the median sale price is around $1.5 million, property values have declined by 10 to 12 percent over the last 12 months, Sneddon said. At the same time, the number of sales for the year-to-date is off by about 15 percent.

“People are just nervous that values will continue to decline, and for that reason, more people are opting to rent, if they are not forced to buy,” he said. The suburban rental market has always appealed to people moving to the area for a change of employment, but a hesitancy to buy seems more pronounced in the current uncertain market, with renters hedging their bets in case it turns out they don’t stay in their jobs, said Helen R. Cusa, an agent with Halstead.

She recently helped a family moving from Los Angeles rent a four-bedroom home, at $10,500 a month, in the Saugatuck section of Westport. Availability of rentals has been higher than usual this year in Westport because of an excess of homes for sale above $2.5 million, she said.

Michelle and Jeremy Fine signed a two-year lease in March for a five-bedroom house in the Old Hill section of Westport. The couple, who have two children, ages 5 and 3, had been living in a rented condo in White Plains, and considered buying there, but decided against it. “The property taxes there are just astronomical,” said Michelle Fine, 41, who helps out with her husband’s education business, ConnectPrep. “The change in the federal tax law was definitely a factor for us.”

Like the Temples, they didn’t want to buy in Westport until they had tried it out. “I don’t believe you’re spending that much more on rent than you would on a mortgage,” Michelle Fine said. “Being in a home you purchased that is not the right fit is a bigger challenge if you have to sell. You have to weigh out what’s more important.”

Renting a house also gives longtime apartment dwellers time to figure out what they really want in single-family living. Since moving to Wilton, Raupp-Temple said, she has concluded that an older home is not for her — too much upkeep.

“And I’m also getting a sense of how much space we need,” she said. “I think we would be fine with three bedrooms, two baths. You start to realize what your needs really are.” Insecurity about the market is also turning more sellers into renters, at least in the short term. Todd David Miller, a vice president of sales at the Higgins Group, said that of the $57 million in sales his team has done so far this year, primarily in the towns of Westport and Fairfield, almost all of the sellers have either moved out of state or are renting in the area. Those who are staying in the area are gravitating toward home rentals near the beach.

“These are mainly higher-end transactions, and the majority of them had to sell at a loss,” Miller said. “They don’t want to put any more money into real estate right now.”

Leslie Razook, an agent with William Pitt, sees the same trend in the New Canaan and Greenwich markets. Baby boomers who have sold the family house are looking for rental homes in walkable neighborhoods near the center of New Canaan or a block off the Greenwich Avenue commercial district.

“People are more careful in making these transitional decisions,” she said. “Particularly for people who have just sold a house — they don’t want to get tied down right away.”

Over the summer, Scott and Nina Ackerman, both 49, decided not to buy immediately after selling the home in Rye, New York, where they lived for 17 years. Scott Ackerman was transitioning out of a career on Wall Street to open Club Pilates studios in Fairfield County, and two of their three sons had gone away to school. But as the couple considered the ample supply of houses for sale in New Canaan and Darien, their preferred towns, they couldn’t find exactly what they wanted.

“I felt like, why force the issue of buying when you can rent?” Scott Ackerman said.

They are now renting a four-bedroom home in Darien for $7,000 a month. And “home prices seem to be coming our way,” he said. “We made a good sale, and I think we’re going to have an opportunity.”

Younger couples are also taking their time with those transitions. Harper and Scott Mates spent a year renting a seven-bedroom house in Rye, New York, before deciding to buy their own home there this summer. Coming from the city with three young children, they knew they wanted to stay within reasonable commuting distance of their jobs, but weren’t certain Rye would be the best choice.

“We both commute every day,” said Harper Mates, 36, who works in private equity. “Renting afforded us the ability to say, well, actually maybe we want to be in Greenwich.”

Instead they fell for Rye, where the median sale price of a house was just under $2 million in July. As the end of their lease approached in August, they jumped on a five-bedroom house on 1 acre within a few days of its listing.

Renting for a year didn’t necessarily enable them to get a better deal on a house, said Scott Mates, 39, who also works in finance, but it prevented them from making a costly mistake. “Spending all this money on rent for a year is a heck of a lot cheaper than buying a place we don’t like and having to sell it and move again,” he said.

And they know they are not alone in their thinking: At a recent play date with children in their oldest child’s kindergarten class, the Mates met three other families who had done exactly the same thing.