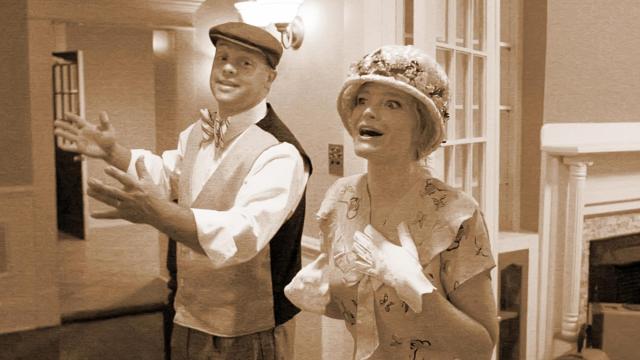 From pirate shipwrecks to Civil War battle sites, North Carolina's history stretches back hundreds of years into the past. In Elizabeth City, the town has an interesting way of preserving and sharing that history.

The Elizabeth City Ghost Walk has been a highly anticipated October event since 1996, taking over historic homes and sites across the city and filling them with ghostly apparitions of the figures that once wandered the area.

Planning a new Ghost Walk with new historic figures to highlight every year can be a challenge — but Margie Berry has plenty of practice. Since 2001, Berry has spent days, weeks, and months researching and writing the script for every year's Ghost Walk, diving into every facet of Elizabeth City's history.

"We try to have a different theme every year, and we usually go to seven homes or sites in the historic district. At every site, you go into the venue, and there's an actor who portrays the ghost of someone from Elizabeth City's past," said Berry. "We try to keep it fresh every year, and I'll do the research to find out as much about the character as I can. It's always fun and interesting, but the challenge is to make it entertaining — it can't just be filled with facts and figures, it's got to hold interest for about seven minutes."

In doing her research, Berry usually consults the internet, but is also sometimes able to trace down descendants who still call Elizabeth City home. Famous characters featured in the past include former presidents Franklin Delano Roosevelt and George Washington, as well as famous poet Robert Frost.

While not all characters have an immediate connection to Elizabeth City, they all traveled through the area at some point in time. And through the Ghost Walk, one man has had the opportunity to play them all.

"The first time I played FDR was when he came to Elizabeth City on his way to Nags Head. As he rode down the street, he turned the mayor, and he said, 'I always thought when I came to a town as old as this, that I would see rows and rows of colonial homes,'" said Phil McMullan, a long-time Ghost Walk actor. "And the mayor responded, 'Well sir, we had them, but you yankees burned them.'"

It's through that blend of wit and accounts of factual history that Berry is able to write engaging scripts — and volunteers like McMullan are able to deliver them.

McMullan played FDR once more, thanks to the former president's role in using Elizabeth City as a training ground for Russian pilots in a WWII top-secret mission now known as Project Zebra. In a typical walk, McMullan usually gives his performances to around 16 groups of people, with 20 people in each group, for a total of over 500 guests.

While playing a former president is a great honor, McMullan also has a soft spot for the more interesting characters Berry brings his way.

"I did Robert Frost twice, and that was because he came down to the Great Dismal Swamp, deciding he was going to be sucked up by the swamp because his girlfriend wouldn't marry him," said McMullen. "But he ended up being picked up by a bunch of drunks and brought back to town, and he wrote a poem about that."

While McMullan remembers his characters fondly, Berry has a few favorites she's written — one being the infamous story of the murder of Nell Cropsey.

An unsolved murder dating back to 1901, Cropsey's case has gone on to inspire books, articles, and a curious following on the internet. Through her years of research, Berry has become intimately familiar with the details of Cropsey's life.

"She was a beautiful young girl, with a jealous, jilted boyfriend, whose case and murder was never solved. When we did the Nell Cropsey walk, we visited her former home, which is still in Elizabeth city, and different sites pertaining to her, like the cemetery where her body spent one night after her autopsy, the courthouse where her jilted lover was tried, and the opera house where the County meeting was after her disappearance," said Berry. "Next year will be the 120th anniversary of her death, so we're going to have another Nell Cropsey themed walk. The one we did in 2011 for the 110th anniversary of her murder was the most popular and the most well attended that we've ever done."

While the 2020 Ghost Walk is unfortunately canceled due to the coronavirus, since the 2021 Ghost Walk will fall on the event's 25th anniversary and the 120th anniversary of the Nell Cropsey case, Berry's already getting ready to pull out all the stops.

"We had a judge here, Judge C. Everett Thompson, who was murdered sitting in his own living room, reading the paper in 1947 — a disgruntled person came along and shot him through his front window. His grandson, Everett Thompson, is here in town and can give me all the information on that," said Berry. "We also have a famous bootlegger, Alvin Sawyer, who was dubbed the Moonshine King of the Albemarle. He was a bootlegger for years and years, and law enforcement never could pin him down — they'd try to catch him, and he'd go jump out of a window or something. He did eventually go to prison several times, but he never stopped."

Having the opportunity to do a deep dive into the notable characters of Elizabeth City's history has given Berry a new appreciation for the town. Although 2020 has forced the Ghost Walk to postpone until next year, Berry looks forward to continuing to share the city's storied past for years to come.

And so far, her work has paid off. As far as events go, the Ghost Walk is one of Elizabeth City's most popular offerings, bringing in locals, but also visitors from across the state and region. Even with over 20 years under her belt, Berry feels she's just scratched the surface of what Elizabeth City's history has to offer — and she hopes those who attend the walk feel the same.

"We have repeat visitors here year after year, even coming from out of state who wouldn't miss it. Elizabeth City is on the Intracoastal waterway, and we get a lot of visitors from that, but we have one couple who plans their trips to the city the second weekend in October, every year, just so that they can come to the Ghost Walk," said Berry. "It's amazing how many interesting characters we have in this town. We just kind of scratch the surface, you know? We'd love to get people here from other areas and continue to engage them with our local history."