Renewal or Gentrification? London Borough Grapples With a Revamp 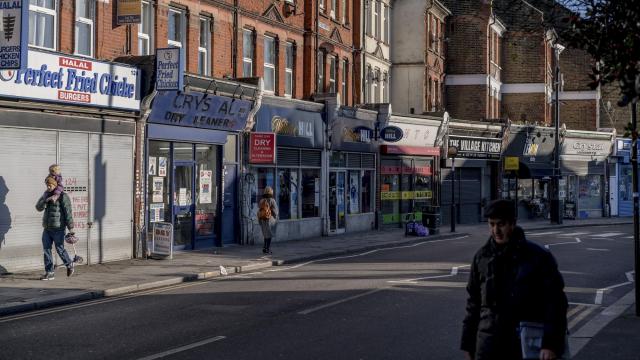 LONDON — Victoria Alvarez is a ball of energy, darting around the Seven Sisters Indoor Market in north London.

On a recent morning, she broke away from chatting with a friend to burst into a general store in the market, asking its Iranian owner if he had some supplies she needed. She barely had time to hear his response before she was off again, standing behind the counter at her currency exchange and parcel shipping stall. In a brief quiet spell, when her husband took over, Alvarez walked across the hall to one of the market’s hairdressers for a blow-dry.

For Alvarez, a Colombia native who has had a stall here for 16 years and is president of the traders’ association, the market is a second home. Customers can shop for groceries, get a bite to eat or a haircut, meet a real estate agent and get legal advice, all under one roof. Her daughter spent much of her youth in its hallways.

“To me, my roots are very important,” she said. “This is why this market is such an important part of the community.”

Now, she says Seven Sisters Indoor Market — the biggest Latin American market in England, by its estimation — is under threat, caught in one of London’s largest ever redevelopment programs. Traders say that they are being priced out, that local officials are riding roughshod over their complaints, and that a hub for the British capital’s Spanish-speaking minority will be lost.

The district surrounding the market, Tottenham, is one of London’s most diverse, with more than 200 languages spoken in the area. It is centered on High Road, a three-mile stretch that is home to shops like halal butchers and Afro-Caribbean hairdressers, as well as small cafes, restaurants and markets like the one where Alvarez works.

Tottenham is also one of London’s most deprived districts, and the local council argues that it is in dire need of renewal. More than 10,000 people are on a waiting list for public housing. Measures of crime are higher than the London average. And proponents of the regeneration point to the 2011 London riots, which started in Tottenham, as evidence that the area’s problems must be addressed. Like many poorer parts of London, the neighborhood also sits uncomfortably beside wealthy districts. People who live on the west side of Haringey, the council of which Tottenham is a part, live about nine years longer than those in the east. Students who live in the west typically perform better academically, and household incomes there are up to twice as high.

The situation — with uncomfortable parallels to Grenfell Tower, the public housing block that was consumed by fire last June and that lay close to multimillion-pound homes — offers a window into the challenges facing London, a dynamic city with a strong economy, but one with a housing shortfall and which many residents can no longer afford.

“There is no place in London that is not experiencing these pressures,” said Mark Brearley, a professor at London Metropolitan University’s Cass Cities program. “Tottenham is an illustration of a London-wide phenomenon.”

If all goes to plan, though, that will soon change — and while those behind the plans hope to improve the area’s prospects, many here fear being pushed out.

A raft of projects are underway. The local Premier League soccer club, Tottenham Hotspur, is carrying out a 750-million pound, or $1 billion, stadium upgrade. Train and subway stations are being renovated, schools and health services upgraded, and around 10,000 new homes are being added. The Seven Sisters Indoor Market will be rebuilt.

“It is ambitious,” said Alan Strickland, the local council member responsible for regeneration. “The scale of the challenge is very big.”

The market’s traders — largely Colombian, but also from Peru, Ecuador, Brazil and parts of Africa — will be moved across the street in 2020 while the market is being upgraded. Then, a couple of years later, they will have the option to move back, according to the local council and Grainger, the company in charge of the development.

Grainger acknowledges that some traders’ rents will go up, but insists that they will be more affordable than those available on the open market. It has promised to hold rent increases to 2 percent for five years from 2020.

Alvarez, 47, has led efforts to oppose the moves. She and her colleagues want stronger guarantees of rent control, more financial compensation and greater clarity about the plans. They have taken the fight to Britain’s courts, and even got the United Nations human rights body to weigh in on their side.

Many other locals also oppose the changes, which they disparagingly call gentrification.

Further along the High Road, the twin brothers who run Chick King, a fried chicken restaurant, are worried. Their small eatery has sat directly opposite the soccer stadium since they opened in 1981. But their cafe, along with a string of houses and shops, faces demolition to make way for a walkway connecting the stadium to a soon-to-be-redeveloped train station.

“The community wanted to see improvements,” said Alex Tryfonos, one of the brothers, “but not wholesale demolition of the area.” He agreed that Tottenham needed the new investment, and the jobs associated with it. But he and other business owners worry that the redevelopment will mean either being forcibly removed — an official report after the riots advocated having fewer, and larger, shops and restaurants — or being priced out.

“I’m not opposed to change,” said Susan Nguyen, whose nail salon is a few doors down from Chick King, before adding: “I would be heartbroken if I had to leave the area.”

Strickland insisted that the plans would have a positive effect on Tottenham, and that there had been wide consultation with locals. And he said some of the factors at play, like London’s sky-high property prices, were out of the local authority’s control.

Yet for Alvarez, the changes in the district are irreparably altering its distinct character and culture. Sitting down above a beauty salon to catch her breath, she said that when her fellow traders asked her what she thinks will happen, she was often at a loss for words.

“I cannot tell them that I can see the future so grim sometimes,” she said. “But sometimes I do. And I cry.”