Raleigh, N.C. — In February, an exciting exhibit featuring life-sized animatronic dinosaurs is coming to the State Fairgrounds. But this isn't the first time giant dinosaurs have roamed Raleigh. Some locals recall a time in the 1960s when the enormous beasts visited North Hills Mall as part of a popular traveling exhibit from a company called Sinclair.

Some lucky folks still have the small rubbery, plastic dinosaur toys – tiny treasures molded right in front of your eyes, still warm from the machine when you took them in your hand.

In April, 1967 the News & Observer reported over 200,000 visiting the Sinclair Dinosaur exhibit at North Hills.

For those who aren't lucky enough to remember, don't worry: Those who were there to see these dinosaurs have never forgotten the experience. 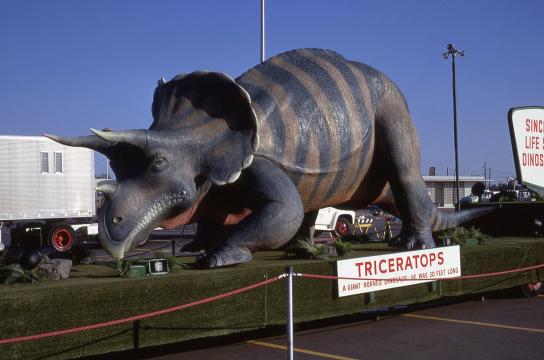 What were the Sinclair Dinosaurs?

Sinclair's dinosaurs first gained fame in the 1930s, when the concept of a life-sized dinosaur statue would have been even more impressive and shocking than today.

They made their debut at the Chicago World's Fair.

Their scientifically-stretched models were meant to brand them as a petroleum company, making a memorable connection between petroleum deposits coming from the time of dinosaurs.

The exhibit was wildly popular, sparking a line of promotional toy dinosaurs. Their logo, a brontosaurus, could be seen on gas station signs all over the area.

Eventually, they expanded their exhibit to include more varieties of dinosaurs. They called the exhibit 'Dinoland,' and it traveled around, delighting crowds and strengthening the Sinclair brand. 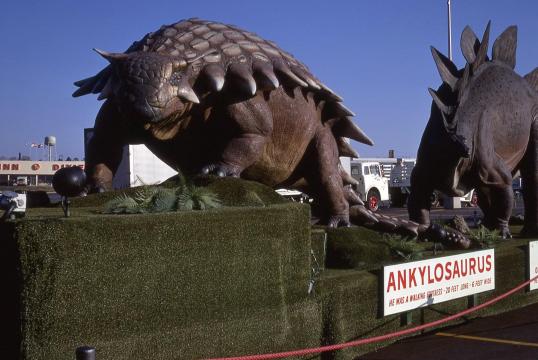 Hundreds of thousands of people visited North Hills to see the dinosaurs, forming an entire generation with wide-eyed childhood memories of the exhibit.

"I remember the dinosaurs were so big and looked real," said Donna Baker, who contributed the rare photos for this story.

"My favorite things were the vending machines. My dad put some coins in and I picked out which dinosaur I wanted. The machine actually made a plastic dinosaur right there!" she said.

Baker got a brown stegosaurus, which she still has today.

"It was warm right out of the machine," she said.

She also got a green brontosaurus, the Sinclair Gas mascot. Sadly, she said, the toy brontosaurus is long gone.

"These were treasures to me," she said.

Nancy Alzain also remembers the wonders of the exhibit. "I remember it so clearly," she said. "I was in the third grade maybe. We went as a family and it was really done so well. I believe it was in the parking lot between Penney’s and the gas station."

Alzain remembers having her own treasured toy Sinclair dinosaur, saying, "We went to Carolina beach and it got washed away from me. I remember being so heartbroken as it floated out into the Atlantic." 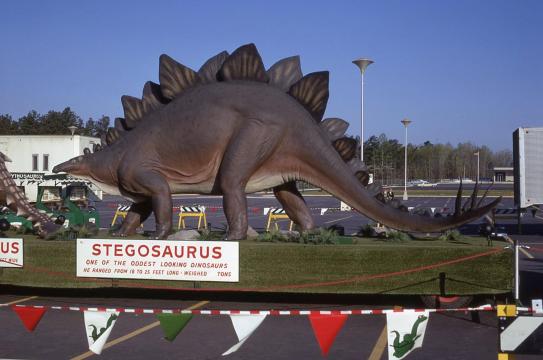 Sinclair also sold blow-up dinosaurs. Becky Watts remembers visiting the Sinclair gas station in New Bern. "Every time we went to Atlantic Beach my Dad would buy me one. Good memory," she said.

"I remember this! I got my very own T-Rex. They made them in a mold right there. It was even warm when I got it!," enthused Beverly Mecum, still excited by the childhood memory, years later.

While many of the toy dinosaurs met tragic ends, like floating out into the ocean, or having their necks break off in bathtub, a precious few of the toys still exist today – shared with children and grandchildren.

"My children played with them and they’re still in the attic," said Annette Garvey. "A wonderful memory." 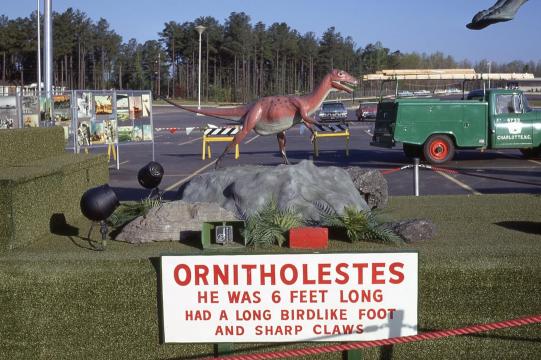 Sadly, in 1969 the Charlotte Observer reported "BP will run dinosaur off Sinclair lots."

The iconic green Sinclair brontosaurus disappeared off signs, replaced by the now-familiar green and yellow shield of BP's signs.

In the end, even Sinclair's dinosaurs had to go extinct.

But it's nice to know they've never been forgotten – and a new generation can enjoy the life-sized animatronic dinosaur exhibit at the State Fairgrounds later in February. 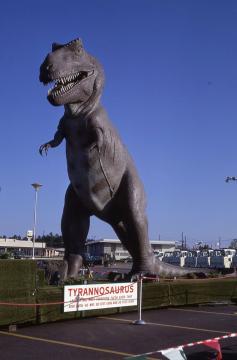