Raleigh, N.C. — Raleigh has grown immensely in the past decade, and with that growth has come exciting new restaurants, music venues, hot spots and more. However, with progress also comes loss.

Let's take a moment and remember the iconic places from Raleigh's culture and history that we lost this decade.

For almost 50 years, IHOP's classic blue A-frame roof was an iconic sight on Hillsborough Street. Open 24 hours on weekends, it was often packed at 2 a.m. with hungry college students and late-night downtown dwellers.

Many patrons paid the restaurant a final visit when it closed in April 2016, sharing stories and memories. Bill Erwin, seated with his wife, said, "This was our last outing as a couple before our son Eric was born...40 years ago."

Its nostalgia and charm harken back to simpler days in downtown Raleigh. 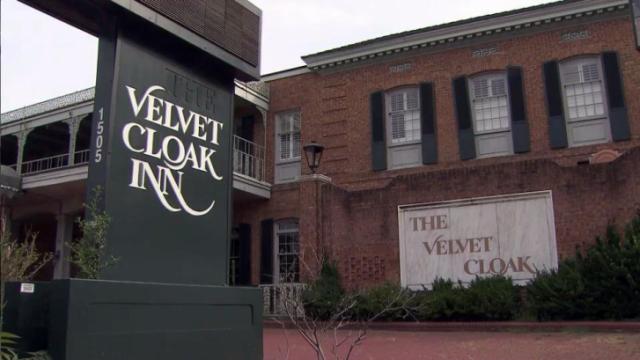 When it opened in 1963, the classic Velvet Cloak Inn was once among Raleigh's most beautiful hotels, attracting celebrities and dignitaries. Offering the height of elegance and luxury, with gated parking, a restaurant, a glass atrium pool and even a nightclub, it attracted high-profile visitors like Bob Hope, Bill Clinton, Marylin Monroe and Bob Dylan, according to Historic Wake County. However, although several sources cite Monroe's presence at the opening Gala as historic fact, this may be an urban legend, as she passed away a year before the Velvet Cloak opened.

Leif Valand, the architect behind Raleigh's renowned Cameron Village, added elements of the New Orleans' French Quarter to the design, which classed up Hillsbrough Street for decades.

According to "Historic Wake County," the inn was named after Sir Walter Raleigh's fine velvet cloak, which he tossed over a patch of mud to protect Queen Elizabeth's shoes. Sadly, the building was torn down in 2017, leading some residents to fear Raleigh was "becoming yet another homogenized, generic city." 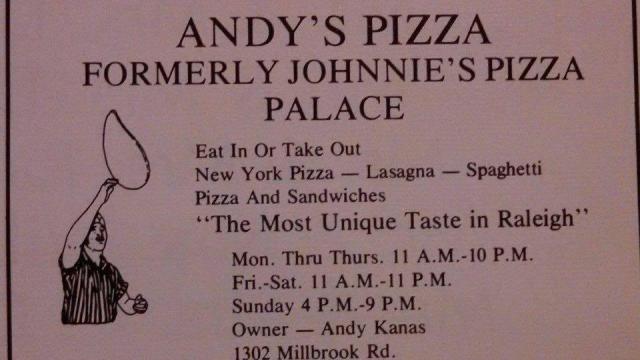 Generations of Raleigh teenagers had their first job at Andy's Pizza, slinging pies and folding boxes for $3.75 an hour. Andy Kanas, the owner, had a special recipe for marinara sauce that made his spaghetti and pizza popular with locals. The secret: He cooked Greek-style marinara, not Italian.

Before starting his own restaurant, Kanas worked for Brother's Pizza--another Raleigh icon--on Hillsborough Street in the 1970's.

Andy's Pizza survived two fires in 1998, bouncing back each time. When it finally closed in 2012, Cristo's NY Style Pizza took its place.

For more than 28 years, The Brewery provided a platform for local and national bands alike. It opened in 1983, just as the Village Subway, another popular venue in downtown Raleigh, was closing its doors. Acts like Corrision of Conformity and Black Flag, which had previously played in the Subway, took to the stage at The Brewery.

National grunge and punk musicians like Korn, Hootie and the Blowfish, Ryan Adams and Jane's Addiction played there in the 1980's.

Like its predecessor, it ensured the punk scene stayed alive in Raleigh and provided local indie bands a place to build a following.

The demolition was part of an ongoing revitalization effort on Hillsborough Street, which neighbors North Carolina State University's campus.

"American lore is rich with the little-bar-that-could archetype, and Sadlack's fits right into that narrative. It was a tiny, scuzzy cash-only bar with remarkable sandwiches," wrote Corbie Hill in his article "Weird in the Daylight," the story of Sadlack's Heroes. Like The Brewery, Sadlack's provided a stage for punk musicians Corrision of Conformity and Ryan Adams.

Known for sandwiches and live music, Sadlack's Heroes had a ready-made crowd in the NC State students living on Maiden Lane. Like Sadlack's, Maiden Lane also became a pile of rubble this decade.

Local punk musician Byron McCay of Th'Cigaretz called Sadlack's the "last bastion" of local music after the closing of The Brewery. 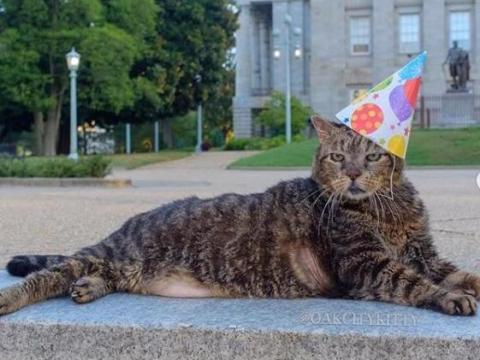 Tucker, better known as Oak City Kitty, was the star of a popular Instagram account centered around his adventures in downtown Raleigh. Governor Roy Cooper presented Oak City Kitty with an award, naming him the "Honorary First Pet" of North Carolina.

Tucker was adopted in 2005 from the Orange County Animal Shelter. Before moving downtown, he was an indoor/outdoor cat who loved to roam the neighborhood. When his owner moved to downtown Raleigh, he "easily transitioned from quiet neighborhood life to the busy downtown living and all that accompanied it - dogs, cars, people, sirens."

According to his family, he began to attract notoriety on the street, as he would often waddle home well ahead of them. They created an Instagram to chronicle his adventures, capturing amusing photos and sharing his often grumpy and funny opinions about life in downtown Raleigh.

"Tucker was a uniter of people," said his family member Ron Kirk, Jr. "Tucker was an icon - worthy of the veneration and adulation by his loyal fans and followers. He was a magnificent cat who brought joy to so many who lived and worked downtown--not to mention the thousands who only knew him through his Instagram account."

His larger-than-life personality transformed him from a mere overweight and indifferent cat into a part of downtown Raleigh's culture. He was a cat who selflessly promoted local businesses and events, spoke for the welfare of pets in need and bettered the lives of everyone who had the pleasure of taking a moment out of their day to rub his ears and say a kind word of love to Raleigh's Best Cat. 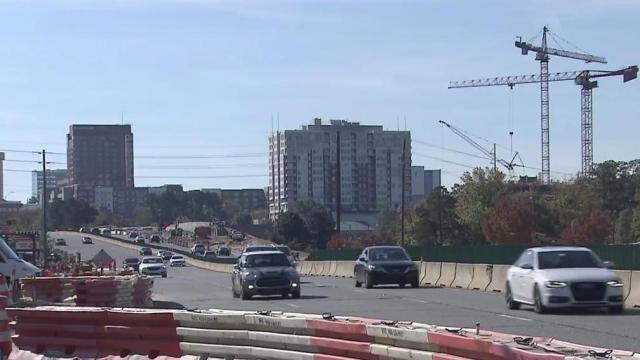 Built in 1953 according to a rare remaining piece of granite marker from the bridge, the bridge on Capital Boulevard over Peace Street was recently updated. According to the NC DOT, it had a sufficiency rating of 44.9 (out of a possible 100), primarily due to its age and construction standards from the 1950s.

The North Carolina Department of Transportation is calling the new bridge a "milestone." The original Peace Street bridge was almost 70 years old, and many drivers had been waiting months for the improvement.

"We are drowning, literally," read the marquee outside Mission Valley Cinemas as they announced their closing after 45 years due to plumbing issues. The classic, old-style theater was a mainstay in Raleigh culture, especially for N.C. State students who needed affordable entertainment that could be reached by the Wolfline. 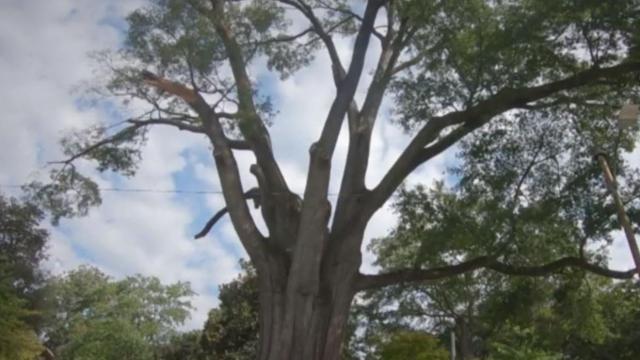 One of Raleigh's oldest and most iconic trees, the 150-year-old "Willow Oak" in Nash Square had been a fixture in downtown for generations.

When the tree was finally brought down in October 2019, some Raleighites went to say goodbye to the old oak, which was cut into discs and given out as mementos for passersby. A portion of its wood will be turned into gavels for the mayor.

According to a video shared by the City of Raleigh, the tree watched Raleigh grow from a population of 19,000 to 460,000, and overlooked Martin Street back when trolleys ruled the roads.

Some legends said the Willow Oak was the inspiration for the shimmer wall on the Raleigh Convention Center; however, according to the designer Jed Gant, a beautiful oak tree in Historic Oakwood Cemetery was his actual inspiration. Tragically, that tree came down in the 2011 tornado--making it yet another Raleigh icon lost this decade.

A decade's worth of change has left Raleigh a very different place than it was in 2010, and there are simply too many lost icons to cover them all.

However, here are a few other people, places and memories that deserve to be written in the pages of Raleigh's history.

Update: Due to multiple bridges on Peace Street and multiple taverns referred to as "Isaac Hunter's Tavern," some confusion has arisen between which bridge and which tavern have been lost. The Capital Boulevard Bridge over Peace Street was demolished this year, and a new bridge put in its place. Isaac Hunter's Tavern refers to the original tavern, built in the late 1700's, not the modern bar standing on Fayetteville Street.

More hidden history and memories from Raleigh's past

Take a look at long gone Raleigh pastimes from each decade -- a time when downtown had its own baseball stadium, when Hillsborough Street had a circus room, and when drive-in theaters like The Forest still stood near Capital Blvd.

Sneak a peak into a vintage five and dime store on Fayetteville Street from a bygone era. McClellan's was the Walgreens of the 1940s, where many teens found their first jobs--and their first loves.