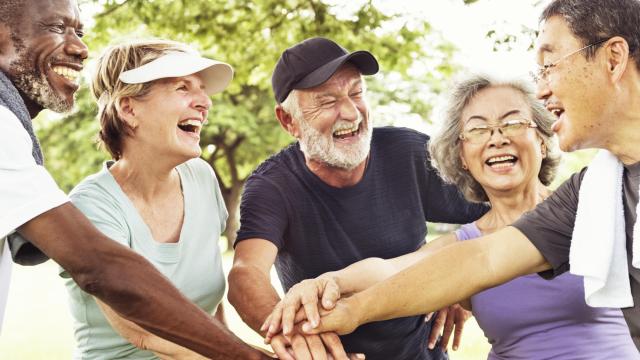 An estimated 5.5 million Americans have been diagnosed with Alzheimer's disease. Of those, almost all of them, 5.3 million people, are over 65, making it a particular concern for seniors.

Health professionals and researchers focusing on helping seniors combat this dementia-causing disease have identified an effective tool in this fight -- vigorous exercise.

"For mild to moderate Alzheimer's diagnoses, research is now fairly clear on the benefits of exercise," said Dr. Joe Hummel, founder and sole practitioner of the Prime MD Center.. "The blood flow and chemical release from movement seems to improve brain health and cognitive function."

The Alzheimer's Association lists benefits of exercise to include reducing hypertension, diabetes, cholesterol and the risk of dementia.

Falling, they also suggest, is another potential hazard that exercise prevents for Alzheimer's patients.

These benefits apply to general health, though. Specific studies are showing the benefits go much deeper for Alzheimer's disease specifically.

At the 2015 Alzheimer's Association International Conference, researchers unveiled a study done at the University of Copenhagen. The study took 200 patients with mild to moderate Alzheimer's and had some continue light exercise while having a randomized portion of others do vigorous exercise of 80 to 90 percent of their maximum heart rate.

For those with mild levels of the disease, it improved mental functioning significantly. The patients with more serious levels of Alzheimer's didn't see as much cognitive improvement, but their mental health greatly improved, with large drops in rates of mood swings, anxiety and depression commonly seen with the disease.

These are not the only studies showing this link. In the Journal of Aging and Physical Activity, researchers published a paper called, "What are the Benefits of Exercise for Alzheimer's Disease? A Systematic Review of the Past 10 Years."

It conducted a survey of the past decade’s studies in this area and found that 13 of the 15 major studies had shown a beneficial correlation between exercise and Alzheimer's treatment.

News of this connection has trickled out of the research community and into the greater senior health care industry, including retirement communities.

Health centers are amenities at many retirement communities, so on-site health workers put these facilities to use in exercise-focused Alzheimer’s treatments.

"Many of the concerns we have with residents who are living with Alzheimer's have to do with cognitive impairment over time," said Victoria Sosa, with Cambridge Village of Apex. "Dementia is a danger with Alzheimer's, and anything that can be done to delay or halt that should be quickly implemented if at all possible. We've done that with vigorous physical exercise, and I believe it really does have major benefits for our community members fighting Alzheimer's."

Senior retirement communities often worry about "wandering" from Alzheimer's patients. Sosa said this common Alzheimer’s symptom is also reduced because that restless energy is burned off and their memory is improved.

Part of a Greater Treatment Plan

Researchers and health workers are quick to say exercise is not a silver bullet for defeating Alzheimer's. It is one tool, though, that research has shown to be an effective part of a larger treatment plan.