Redistricting power on the ballot in NC General Assembly elections 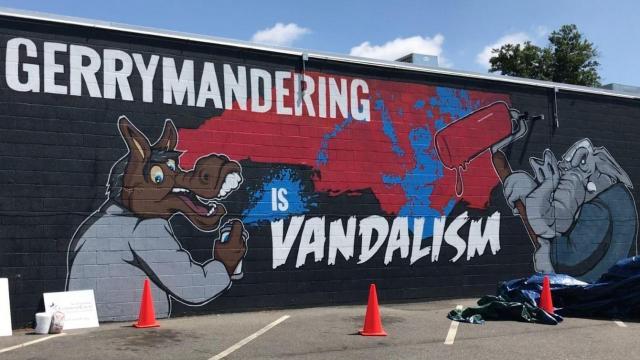 Raleigh, N.C. — Control over redistricting, and the political power that can flow from it, may be the most fundamental prize at stake in this year's General Assembly races.

If one party controls the North Carolina House and Senate, it decides where the lines are, not only for lawmakers' own districts, but for congressional ones as well.

Democrats have promised reforms that give lawmakers less power to draw their own lines, pick their own constituents and lock in power with computer-drawn election maps full of "safe" districts.

Republicans who hold the majorities now have made no such promise. They have a nearly decade-long record of creating maps Democrats repeatedly challenged, successfully, in court as illegal racial and partisan gerrymanders.

Republicans also have a more recent record of drawing maps in a more bipartisan and transparent process as part of a court-ordered redistricting last year that allowed lawmakers to set the lines but required more public disclosure.

There's some nuance to Democratic promises on redistricting reform. Any constitutional amendment changing the process, which isn't required but has often been contemplated in reform bills, wouldn't be in effect next year when lawmakers are expected to draw maps meant to stand for a decade.

That leaves the potential for parallel processes: Long-term redistricting reforms and a more immediate redraw using new numbers from this year's once-a-decade census.

There's certainly no guarantee Democrats will win majorities in the House or the Senate. But if they do, what guarantees are there that they'll resist the allure of power?

“I’ve got an expectation that they will do the right thing," said Bob Phillips, executive director of Common Cause North Carolina, which has lobbied for decades for redistricting reform.

"Adopt rules for 2021 that are comprehensive, real redistricting reform, even without the backup of a constitutional amendment," Phillips said. "That is my expectation, that is my demand, and I will say that, if they don’t do that, we will do everything that we can to hold them accountable and make them pay the price."

Democratic leadership in both the House and the Senate say they're committed to reform, but the promise is more explicit in the House than the Senate.

Politicians have a history of waffling on redistricting reform. When Democrats controlled the General Assembly a decade ago, they resisted reform, and Republicans championed it. When Republicans won control of the legislature, some of their most prominent members changed their minds.

In Virginia, redistricting reform was a well-known plank in the Democratic Party's pitch for control of that state's legislature. But when Democrats won majorities last year, some got cold feet. The state party ultimately opposed a plan to create an independent commission to draw Virginia's lines, and a handful of Democrats ended up siding with House Republicans to pass the plan.

Rep. Darren Jackson, D-Wake, the Democratic leader in the North Carolina House, was unequivocal this week in his support for reform, saying he wants "independent, nonpartisan redistricting, or we don’t do it at all."

"If there is a Democratic House, independent redistricting will pass," Jackson said in an email. "If the Senate fails to pass redistricting reform and if I am speaker, the House will not pass a partisan redistricting plan. If no plans pass the General Assembly, the courts will have to do it. No wiggle room for me; I have made my position very clear."

WRAL News reached out to both men and to other Democrats in the House in an attempt to lock down exactly what Democrats are promising on redistricting should they win majorities this cycle. The same questions went to Democratic leaders in the Senate, who promised reform but left more open space on what that would look like.

"At this juncture, we can’t say for sure how redistricting would proceed in the next legislative session if one or both chambers flip," Leslie Rudd, spokeswoman for Senate Minority Leader Dan Blue, said in an email. "We need to cross that bridge when we get to it. Short of a constitutional amendment, we are committed to a more transparent legislative process with actual public input that puts these guidelines into practice."

Rudd noted that both House and Senate Democrats have been vocal on the issue and said they are "serious about reforming the process." Democrats in both chambers have backed a number of reform bills in recent years, some with bipartisan support, but they've not moved forward in the Republican-controlled legislature.

"An overwhelming majority of Senate Democrats and candidates have expressly stated their support for independent redistricting reform so that politicians don't pick their voters," Chaudhuri said in a statement. "Over the last few years, a number of Democrats have filed redistricting bills. These bills share common principles that would guide Senate Democrats going into next session: drawing maps in a manner that's open and accessible to the public, maximizing opportunities for robust online comments and establishing a nonpartisan independent commission."

Sen. Jeff Jackson, D-Mecklenburg, is arguably the Democratic Party's most vocal reform advocate in the Senate. He said it is "incumbent" on the caucus to handle the 2021 redraw in a fair way if they get control.

"It would have to be a system that doesn't involve politicians drawing the maps," Jackson said.

If one party is favored to control the North Carolina General Assembly next year, perhaps it's the Republicans.

The general wisdom is that Democrats picked the low-hanging fruit two years ago when they broke Republican super-majorities, and winning majorities outright is a tougher lift.

WRAL reached out to Republican leadership with the same questions on redistricting reform. House Speaker Tim Moore's spokesman, Joseph Kyzer, said only this:

"We expect to build on the success of the 2019 redistricting process which drew bipartisan support from House lawmakers in committee and the floor, was approved by two Democratic trial court judges and upheld by North Carolina’s appellate courts."

Those maps were redrawn under court order. Lawmakers set the lines, but they did it sitting in a room open to the public, with computer screens visible to cameras that live-streamed the process on the internet.

This was a departure from a much more secretive process, and Senate President Pro Tem Phil Berger's office indicated the open process would be used again if Republicans control the 2021 redraw.

"It’s a process that led to a super-majority in the Senate supporting the new Senate district maps," spokeswoman Lauren Horsch said in a statement. "There is no need to reinvent the wheel. What we do need to do is put partisan court battles behind us."

Horsch cautioned against approaches that look like independent reform but give elected Democrats a majority of appointments to an independent board to work on maps.

"Redistricting reform will be part of the conversation during the next biennium like it has been previously, but initiatives by Democratic-aligned ‘nonpartisan reform’ groups leave others skeptical of their true motives," she said in her statement.