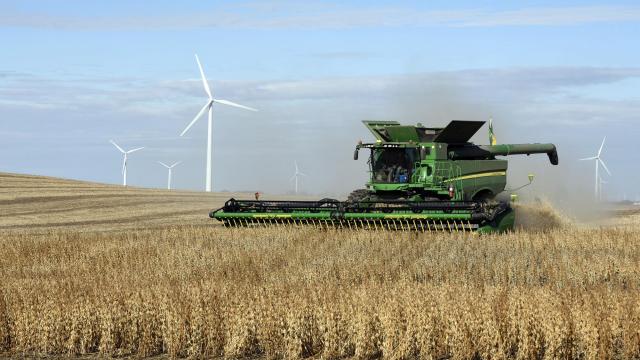 WASHINGTON — Voters in red states largely shrugged off concerns about the economic effect of President Donald Trump’s global trade war, throwing their support behind Republican candidates who embraced the administration’s protectionist agenda despite attempts by Democrats to turn it into a wedge issue.

In a series of high-stakes Senate races in states exposed to Trump’s tit-for-tat tariffs, voters ousted three incumbent Democrats on Tuesday who tried, in varying degrees, to tie their Republican opponents to the president’s tariffs on steel, aluminum and Chinese goods. Those tariffs have provoked retaliatory levies on agricultural and industrial products in Republican strongholds.

Democrats tried to seize on the issue, to little effect. Sen. Heidi Heitkamp of North Dakota ran ads accusing her opponent, Rep. Kevin Cramer, of failing to protect farmers from China’s retaliation — remarking that her state needed Trump’s help “like a cow needs a hamburger.” Sen. Claire McCaskill of Missouri toured a nail company that said it was going to go out of business as a result of steel and aluminum tariffs. Sen. Joe Donnelly of Indiana said the tariffs would cause “lasting harm” for Hoosier farmers.

All of them lost, and badly.

Cramer, who mildly criticized the tariffs but praised Trump’s overall approach, beat Heitkamp by nearly 11 points. Josh Hawley, who unseated McCaskill, and Mike Braun, who trounced Donnelly by nearly 10 points, did not back away from their support for the tariffs.

“Sen. McCaskill thought she could drive a wedge between Josh and the ag community. It didn’t work,” said Kyle Plotkin, Hawley’s campaign manager, referring to the agricultural community.

In many ways, the races were a test of whether Trump’s strategy of emphasizing short-term pain for long-term gain would resonate with parts of the country battered by, or hostile to, globalization.

“People are willing to deal with some short-term pain to serve a long-term goal,” said Eric Branstad, a former administration official in the Commerce Department who ran Trump’s campaign in the state two years ago.

“The fact that Trump concluded a deal with Canada and Mexico gave people a sense that things were moving in the right direction,” Branstad said. “There’s also the trust factor for him here.”

Republicans lost two House seats in Iowa, which has also been hit by retaliatory tariffs on soybeans, pigs and other agricultural products. But those losses had less to do with trade than with suburban gains by Democrats in more affluent and educated areas adjacent to midsize cities like Des Moines and Davenport.

In North Dakota, where soybean farmers have struggled with China’s retaliatory tariffs, 93 percent of Republican voters supported the president’s positions on trade, about the national average for Republicans, according to exit polls from CNN.

Nationally, less than a third of all voters said that Trump’s trade policies had hurt them. It is impossible to quantify the influence of the president’s trade policies, especially in industrial states like Wisconsin, Pennsylvania and Michigan, in which support for Democrats surged significantly. But Democratic consultants in those states said the tariffs contributed to a general anti-Trump sentiment, but were not a central issue in the midterm elections.

An analysis by The New York Times of election results and economic data showed that Trump’s party continued to perform strongly in agriculture-rich House districts — which helped create a rural firewall that largely limited the party’s losses to suburban areas. Republicans held onto 17 of the 25 districts that are the most dependent on agricultural jobs. Democrats retained the four they held, with two seats held by Republicans yet to be decided.

Trump’s overall popularity in rural America seems to be growing — and it seems to have been stoked by the tactic, employed by China and other trading partners, of targeting retaliatory tariffs at Trump-friendly districts.

“I think our pain definitely has a purpose,” said Doug Schroeder, a corn and soybean farmer from Mahomet, Illinois, a district that voted Republican on Tuesday. “I don’t think the balance of trade with China has been fair for a long time. Someone needed to stand up and do something.”

In Washington state’s 4th Congressional District, which includes much of the state’s wine-producing region, Rep. Dan Newhouse, the Republican incumbent, defeated his challenger by 28 points on Tuesday. Two years ago, in a far more Republican-friendly environment overall, Newhouse won by just 16 points.

The expansion of the Republican majority in the Senate, and the failure of the tariffs to ignite a political brush fire, is likely to embolden Trump as he contemplates additional tariffs on all Chinese imports before he meets with President Xi Jinping of China this month in Buenos Aires.

Trump, speaking Wednesday at a White House news conference, signaled he would continue his pugilistic approach to trade. Trump heralded the revised North American Free Trade Agreement, which still needs to be approved by Congress and expressed hope that Democrats, who now control the House, will help shepherd it through. He boasted that tariffs on China were filling the coffers at the Treasury Department.

And he reiterated his threat to impose tariffs on automobiles from countries that do not agree to trade deals that benefit the United States, suggesting that tariffs on Japanese cars could soon be in store.

“Say hello to Shinzo,” Trump told a Japanese reporter, referring to Prime Minister Shinzo Abe of Japan. “I’m sure he’s happy about tariffs on his cars.”

Still, the trade issue, so central to Trump’s 2016 presidential campaign and appeal to voters in the Midwest, was little more than background noise in states like Indiana and Missouri, overshadowed by the fierce and polarizing debates over health care, immigration and Trump himself.

And even in North Dakota, where farmers are reporting a sharp decrease in Chinese demand for soybeans, the political consequence was barely detectable.

Trump, who authorized a $12 billion bailout in July for farmers hit by China’s tariffs, made a point of playing down his own responsibility for the pain felt by local businesses and farms, repeatedly placing the blame on Beijing.

In September, a staff member for a Republican congressional candidate in Iowa contacted the White House press secretary, Sarah Huckabee Sanders, with word that The Des Moines Register was running a paid supplement from a Chinese state-run news organization trying to undercut support for Trump among Iowans. Days later, at the United Nations, Trump used the paper to accuse China of “trying to meddle in our elections” — a charge Beijing vehemently denied.

“China was very attuned to our internal politics, and they tried to maximize the angst that was felt in some of these Trump areas, but they clearly missed the mark,” said Joseph Parilla, a fellow at the Brookings Institution who has analyzed the patterns of retaliatory tariffs in red states.

“The thought that American voters pick a candidate based on how they position themselves on the issues,” he added. “They didn’t realize that a person’s partisan affiliation determines their positions, even when the policy directly impacts them, not vice versa.” Resistance to Trump’s trade policies from Republican lawmakers and business leaders is unlikely to abate even if his voters are willing to weather them.

Speaking at a forum Wednesday in Singapore, Henry Paulson, who was Treasury secretary under President George W. Bush, warned about the prospects of an “economic iron curtain” and said that he feared that large parts of the global economy would be closed off to free trade and investment.

Joshua Bolten, the chief executive of the Business Roundtable, said Wednesday that he was still hopeful that Trump would pursue a more “cooperative” trade agenda in the second half of his term.

“What the business community will be looking for over the next two years of the Trump administration is a lessening of the conflict with our good friends, allies and trading partners,” Bolten said.