Red-hot Dow closes above 26,000 for the first time 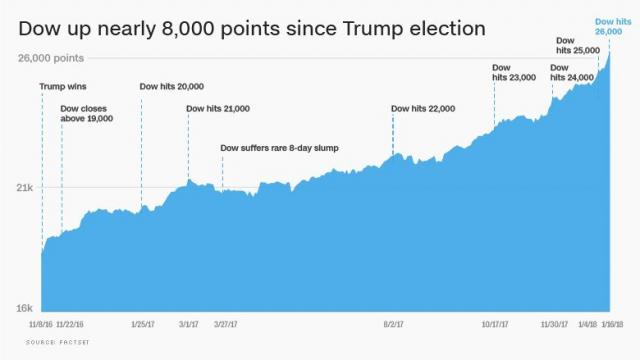 NEW YORK (CNNMoney) — The stock market is on fire. The Dow just zoomed another 300 points and closed above 26,000 for the first time.

The latest rush to buy stocks left the average up almost 8,000 points since President Trump's 2016 election.

The rally on Wednesday gave the Dow its best percentage gain since since November. And it showed that the upward trend remains intact despite a big reversal the day before. The Dow hit 26,000 on Tuesday morning before closing much lower.

Wall Street is fired up because U.S. unemployment is the lowest in 17 years, global economic growth is gaining steam, corporate profits have never been stronger, and companies are sitting on record amounts of cash.

Investors also love the GOP corporate tax cut, which will save companies billions of dollars and give them even more money to return to shareholders and to buy and merge with other companies.

But the velocity of the rally is raising eyebrows. It took just seven trading days for the Dow to climb from 25,000 to 26,000. While that is just a 4% advance, it's part of a broader surge that has carried the Dow 42% during the Trump era. And the market rise has come with virtually no breaks.

Some analysts worry that investors are so euphoric that the market is in a "melt-up." These buying frenzies are fueled by fear of missing out on the party instead of fundamentals like earnings.

That kind of behavior is typical at the end of bull markets, according to Dan Suzuki, U.S. equity strategist at Bank of America Merrill Lynch.

"As euphoria starts to take hold of the market, you see upside accelerate," he said.