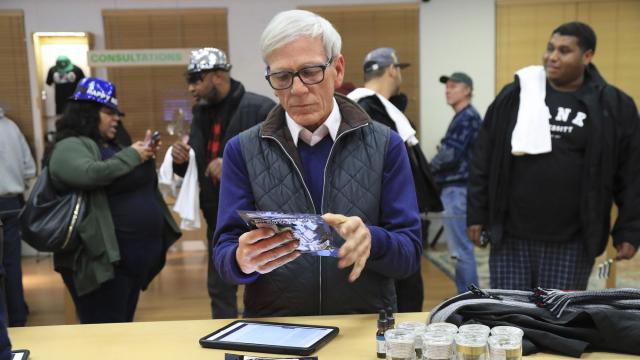 A transaction that remains illegal in many parts of the country seemed almost banal Monday for the customers at a dispensary in Oakland who picked out their marijuana, showed their driver’s licenses and walked into the brisk morning air with their drugs in a paper bag.

“This is a whole new world opening up,” said Diana Gladden, 48, who bought marijuana for herself and her aging parents. “My mother, a very strict Southern Baptist, now thinks it’s OK because it’s legal.”

One customer left with more than $1,000 worth of cannabis in a large grocery bag.

Medical marijuana has been legal in California for more than two decades but the arrival of full legalization in the state is a milestone for the nation’s fast-growing cannabis industry. Pot is now sold legally down the entire length of the West Coast, plus Alaska.

A slow and halting rollout of California’s new cannabis regulations limited the number of shops offering the drug Monday to just a handful of cities across the state, including Berkeley, Oakland, San Jose and San Diego. But more municipalities, including San Francisco and Los Angeles, are expected to issue licenses soon.

Alex Traverso, a spokesman for California’s Bureau of Cannabis Control, said around 100 dispensaries in the state were licensed to sell recreational cannabis Monday.

Outside the dispensary in Oakland nearly 200 people waited in line before dawn for the 6 a.m. start of sales.

“Happy New Year!” Steve DeAngelo, executive director of the dispensary, shouted through a bullhorn. “We’ve been looking forward to this day for a long time.”

But in a state where marijuana has been widely available for so long, the enthusiasm was relatively muted. Outside a dispensary in neighboring Berkeley only a handful of customers waited in line before sales began.

California is the sixth state to introduce the sale of recreational marijuana, after Colorado, Washington, Oregon, Alaska and Nevada. Massachusetts and potentially Maine are expected to begin sales later this year.

National opinion polls have shown a gradual and steady approval of legalization. Californians voted for recreational use of the drug by a 57-43 percent margin in a November 2016 ballot initiative. The law prohibits smoking in public, although such bans are already commonplace in California cities.

Unlike the other states that have legalized, California has a vast industry producing the drug, much of which is illegally sold across state lines. By one estimate, California produces seven times more marijuana than it consumes.

Legalization here will test whether that vast black market of growers, many of whom have been reluctant to join the legal market, will come out of the shadows.

It is unclear how much legalization will increase consumption of the drug in California. Since 1996 marijuana has been available from medical dispensaries for adults with an easily obtainable recommendation card. And even those without medical cards have had little fear of prosecution. It has been many years since police officers in California made arrests for possession of small amounts of marijuana, according to Jennifer Tejada, chairwoman of the law and legislative committee of the California Police Chief Association.

Jonathan Duenas, a college student and one of the cannabis customers in Oakland on Monday, said he had come for the novelty but probably would not return.

Even as more cities in California prepare to issue cannabis licenses, a number of questions remain about the effects and implementation of the new laws.

The head of the Bureau of Cannabis Control has raised concerns that there may not be enough licensed cannabis distributors in the early days of retail sales. A similarly bumpy rollout took place in Nevada in July when Gov. Brian Sandoval took emergency measures to combat a shortage of legal marijuana soon after legal sales began.

Opponents of legalization warn that California could see an increase in traffic deaths, as appears to have happened in Colorado since stores in that state began selling recreational cannabis four years ago.

Traffic deaths in Colorado involving drivers who tested positive for marijuana more than doubled from 2013 to 2016, according to a study published by a federal government agency in October. The report also noted a 35 percent increase in emergency room visits related to marijuana.

California has not yet adopted a standard measure for marijuana impairment, an issue highlighted on Christmas Eve when a California highway patrolman was killed after a man whom police said was driving under the influence of both alcohol and marijuana rammed into the back of the officer’s vehicle.