Recreation opportunities offer adventure for all in 'Little' Washington 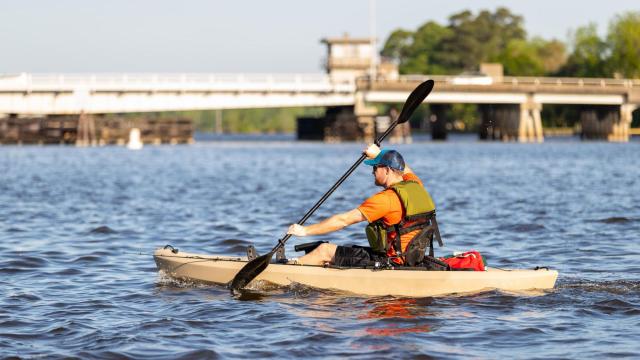 Washington, N.C., is a small intercoastal city known for its welcoming vibe and access to outdoor recreational opportunities, especially those that capitalize on the waterfront that is just steps away from the historic downtown.

"It's a nice place to come and just breathe," said Liane Harsh, resident and owner of Inner Banks Outfitters, an outpost downtown for all things cycling, kayaking and paddle boarding.

After growing up in Fort Lauderdale, Harsh knew Washington was for her when she first made the trek north to visit friends 13 years ago. She ended up quitting her job as a teacher, writing a business plan, getting a loan and the rest is history.

"In Fort Lauderdale, the ocean was right there, but it wasn't as accessible," explained Harsh. "Here, I'm part of the river every single day."

The waterfront at "Little" Washington attracts weekenders from Raleigh and day-trippers from Greenville, in addition to boaters dropping in while traveling up and down the East Coast. Free docks, unique boutiques and welcoming locals add to the attraction that has made Washington a top recommendation on many boating guides.

The estuaries of the Pamlico, Tar and Pungo rivers provide adventures for visitors who seek easy access for boating and fishing.

Runyon Creek, just around the corner from Washington's historic downtown shopping district, has a public boat ramp and an ideal escape into the wilderness for paddle boarders.

Birdwatchers can access the N.C. Birding Trail locally or enjoy the wintering waterfowl that inhabit the many parks and wildlife refuges in the area.

Goose Creek State Park has an Environmental Education Center for visitors, in addition to eight miles of well-marked hiking trails and a campground that is open all year.

Castle Island – also known as Goat Island due to its history as pastureland for the animals – provides respite for weary kayakers paddling the river. Local businesses have begun to capitalize on this ideal location with organized sunset picnics, and wine and cheese events.

"The community is really supportive for cycling," Harsh said. "There is a good co-existence between bikes and cars. And on the roads, you're basically out in the country, so you barely even see cars out there."

The flat land around the Pamlico has helped Washington bring in its fair share of large athletic events, from 5Ks to triathlons and half marathons.

Cycle North Carolina and the Mid-Atlantic qualifier for Race Across America host events in Washington, in addition to the city's own Ride for Rose Haven in May, a cycling event that raises funds for Rose Haven Center of Healing. The Center is a local home for female veterans readjusting to civilian life.

Every three years, when Cycle North Carolina comes to town, 2,000 cyclists set up tents along the waterfront for a weekend takeover – an event that quadruples the town's economy, according to Harsh.

The city's Parks and Recreation Department has built up many programs and services for locals as well. The city's facilities include a sports complex for youth soccer, baseball and softball, a fitness and aquatics center, a gymnasium and outdoor basketball courts, and playgrounds and parks overlooking the Pamlico.

Seasonal sports, summer programs and programs created for seniors, such as aerobics, computer classes, organized trips and many more, add to the city's offerings for locals.

"I've been here 13 years, and the town just keeps getting better and better," Harsh said.