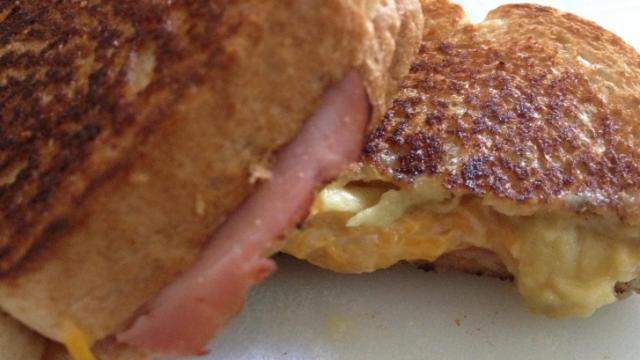 Editor's note: This is an oldie but goodie recipe on Go Ask Mom.

My older daughter really enjoys watching shows on Food Network and picking out recipes from its magazine. She makes some of them on her own and points out others that she'd like me to make.

This one - for Ham-and-Cheese Wafflewiches - was not one of those. She wasn't sure she'd like anything but fruit or syrup on waffles. But she's a fan of grilled cheese, so I followed the general guidelines of the recipe using bread instead of waffles for the final product.

Served with some soup on the side, these were a hit and very easy to put together on a night when I'm shuttling kids between school and a piano lesson and soccer practice.

1 apple, peeled and grated. (The recipe calls for Granny Smith, but I wouldn't rush out to the store to get one if you have another kind already. I used golden delicious).
1/3 cup honey mustard
1/2 pound of deli ham
1/4 pound sliced cheddar cheese (I didn't have any sliced cheese on hand so substitute shredded cheese, which worked just fine).
8 slices of bread
Butter

Mix the grated apple and honey mustard in a bowl. Prepare your bread by buttering one side of each slice. Spoon the apple and mustard mix on the bread and top with cheese, ham and the other slice of bread. Grill as you normally would make a grilled cheese sandwich. I make mine over medium heat. It takes a few minutes per side.