Demographic changes in the composition of North Carolina’s child population will likely introduce new challenges any goal of increasing statewide educational attainment. In Fall 2018, 44 percent or 674,000 North Carolina public school enrollments were black, Hispanic, or American Indian students. Over the past 5 years, this group of students has grown twice as fast as the overall student population and is projected to continue to grow steadily for the next 5-10 years.

Programs that reach, engage, and successfully enroll, retain, and graduate our state’s growing population of first-generation and minority students will be vital to ensure North Carolina’s progress towards any statewide attainment goal. Failure to improve these outcomes is not only detrimental to the future economic well-being of these children and their families: it will ensure that our state’s primary path to future attainment growth will be the continued reliance on in-migration of highly educated individuals from other states and countries. 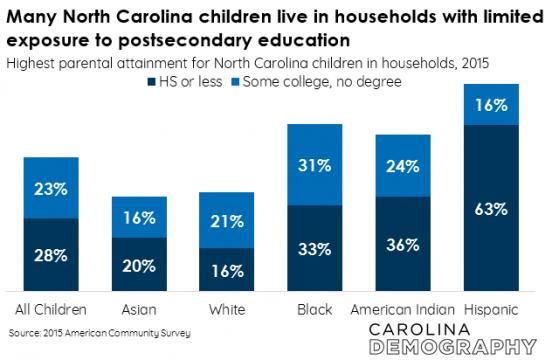 *Note: The population without a college degree is defined here as just those most ready for a degree: individuals who have completed high school or a GED/equivalent. Reporting is limited to black and Hispanic populations as the American Indian population is too small to derive reliable estimates.
Data Sources: NC DPI, 2015 American Community Survey, IPEDS, UNC-GA, and NCCCS