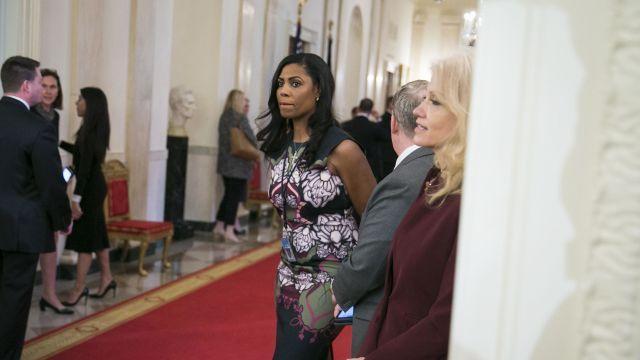 Omarosa Manigault Newman secretly taped John Kelly, White House chief of staff, as he fired her in December in the Situation Room, a breach of security protocols, but one that revealed him suggesting that she could face damage to her reputation if she did not leave quietly.

The recording was played Sunday on NBC’s “Meet the Press,” where Manigault Newman, a former adviser to President Donald Trump, promoted her new book, “Unhinged.” In the memoir, which focuses on her relationship with Trump going back to her time on “The Apprentice,” she describes the world around the president as a cult in which he creates his own reality.

On the recording, Kelly says Manigault Newman could be facing “pretty significant legal issues” over what he alleged was misuse of a government car. She denied misusing it.

“I’d like to see this be a friendly departure,” Kelly says on the tape. “There are pretty significant legal issues that we hope don’t develop into something that, that’ll make it ugly for you.”

“But I think it’s important to understand,” he adds, “that if we make this a friendly departure, we can all be, you know, you can look at, look at your time here in, in the White House as a year of service to the nation. And then you can go on without any type of difficulty in the future relative to your reputation.”

Manigault Newman explained to Chuck Todd, host of “Meet the Press,” that she recorded that conversation, as well as others she has played for reporters and book publishers featuring her conversations with Trump, because “this is a White House where everybody lies.”

The Situation Room is supposed to be devoid of personal electronic devices, which signs outside the room make clear. Former national security officials said it was not clear whether Manigault Newman had broken any laws, but she certainly violated the rules around what is supposed to be one of the most secure rooms in the capital.

Privately, officials who worked with Manigault Newman said it was the type of damn-the-rules behavior she had engaged in for months and which bothered many of her colleagues — but not Trump, who had to be cajoled into letting her be dismissed.

People close to the White House said that she was a difficult colleague and that despite complaining of being blackballed by Kelly, Manigault Newman had indicated to incoming West Wing staff during the transition that they could face bad press if they did not give her a prominent role. Even Trump had begun wearying of Manigault Newman’s omnipresence in meetings by the middle of his first year, those people said.

“The very idea a staff member would sneak a recording device into the White House Situation Room shows a blatant disregard for our national security — and then to brag about it on national television further proves the lack of character and integrity of this disgruntled former White House employee," the White House press secretary, Sarah Huckabee Sanders, said in a statement late Sunday.

No White House official offered an explanation for why Manigault Newman was hired in the first place if people had such concerns about her.

Trump has long been known to tape conversations over the phone and in person in his office at Trump Tower. He has threatened to produce tapes in the past as a way to instill fear in enemies, such as fired FBI Director James Comey.

“I think it’s incredibly important in Trump world that you protect yourself, because everyone constructs their own reality,” Manigault Newman told The New York Times on Sunday. “People around him try to reinforce that manufactured reality.”

Manigault Newman claims that in one tape, Trump uses a racial slur in off-camera remarks during his time on “The Apprentice.” She describes the tape in her book but has said she does not have it herself.

When Todd asked Manigault Newman if she had ever heard the president say the slur, she said, “You know, I was in his presence when he said inappropriate things, but he has never said the N-word in my presence. Ever.” She did not say which “inappropriate things” she had heard.

But Manigault Newman said that, after finishing her book, she had gone to Los Angeles to visit a person who had a copy of the tape in which Trump is said to use the slur. “I heard his voice, as clear as you and I are sitting here,” she told Todd, adding: “It confirmed that he is truly a racist.”

As Todd read quote after quote over several years in which Manigault Newman defended Trump in public, she said she had played a role in selling the administration’s version of reality to the public, calling herself “totally complicit.”

“In fact, I had a blind spot where it came to Donald Trump,” she said. “I wanted to see the best in him. And obviously I, I felt miserably.”

On ABC News’ “This Week,” White House counselor Kellyanne Conway was pressed on Manigault Newman’s claim that she was offered a hush-money contract with the Trump re-election campaign for $15,000 a month. It is the same amount that a few others who have departed the White House under inauspicious circumstances are receiving.

Conway said “that is not what was offered” to Manigault Newman. She acknowledged that all West Wing officials had signed nondisclosure agreements, a measure that Trump relied on for decades as a real estate developer.

“Why wouldn’t we?” she asked when the host, Jon Karl, pressed her on the issue.

“I have worked alongside that man for over two straight years now without interruption; I have never a single time heard him use a racial slur about anyone,” she said. “And it’s — and I also never heard Omarosa complain that he had done that. And so the only thing that’s changed is that she’s now selling books.”