RDU purchased four Proterra electric buses in 2019 and is hoping to buy more.

In addition to switching to zero-emission buses, RDU is also working on its first Sustainability Management Plan, in which leaders will look at ways the airport can reduce its carbon footprint, waste and energy use.

Plans to purchase more buses were put on hold during the pandemic.

A spokesperson from RDU told WRAL News, "We planned to buy more but had to pause those plans when the pandemic hit. We do plan to purchase additional electric buses in the future as we replace our aging diesel models."

On Wednesday at 6 p.m., officials will hold a virtual event to hear from people who fly in and out of the airport. The public is invited to join and share input on the sustainable changes they'd like to see.

Several large airports, like those in Washington, D.C., have made the switch to electric buses.

According to an article on AirportImprovement.com, the zero-emission battery-charged buses could significantly change RDU's impact on the environment. 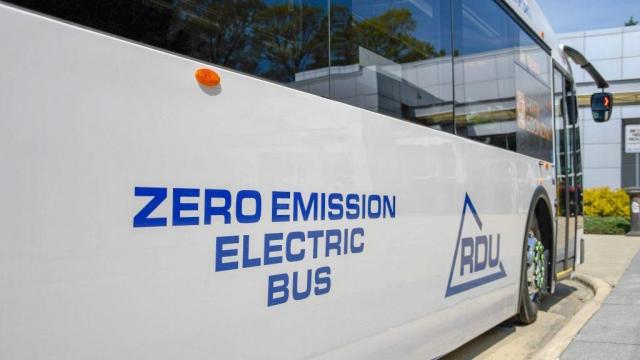 "Currently, RDU shuttle buses transport on average 112,166 passengers and luggage per month between the airport's two ParkRDU Economy lots and terminals with a diesel-powered fleet consisting of 14 40-foot transit buses that are replaced every 7 to 10 years," the article reads, adding the buses "will replace four older diesel buses, resulting in the elimination 16.9 million pounds of greenhouse gases."

The cost for RDU once it switches from diesel to electricity is also less, the article states.

The change is made possible in part from a grant from the Federal Aviation Administration.