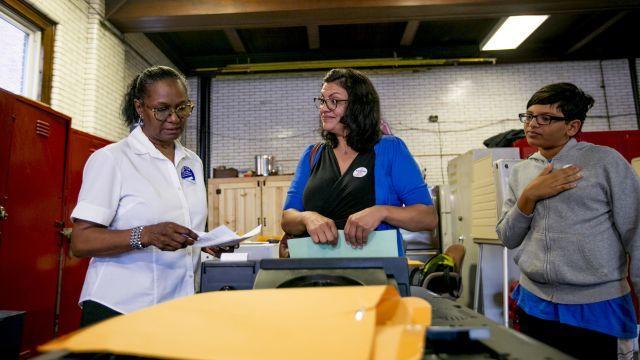 Back in December, Rep. John Conyers Jr. resigned his seat in Michigan’s 13th District over sexual harassment allegations. He had been one of Congress’ longest-serving members, having represented the district, which is 57 percent black, for 52 years.

Two races on the same day for the same seat in different terms.

Confused? So were we.

Q: So, why were there two races?

A: The easy answer is to save money, or at least that’s the reason that Michigan Republican Gov. Rick Snyder gave in a statement in December. Instead of hosting a separate special election to fill Conyers’ seat, he scheduled the special election to be on the same days as the primary and general voting already scheduled for 2018 to save taxpayers the expense of hosting more elections.

Snyder also said he wanted to give ample time for candidates to decide whether to run for the seat. In the same news release, he said that the more time candidates have to file their paperwork gives constituents more options as to who will next represent them in Congress. More time to file means more people would file.

This meant that Tuesday, voters picked both a candidate to run to fill Conyers’ seat for the remainder of his term — through the end of 2018 — and a candidate to run in the general election. Both races will again be on the ballot in November.

In both races, there are no declared Republican opponents.

Further complicating things, Jones, the president of the Detroit City Council, has not yet decided whether she would resign from that position to serve in Congress for two months.

Q: Wait, so Jones will only be elected for two months?

A: Just about. If you want to get really technical, Jones would be a congresswoman from Nov. 7, 2018, to Jan. 3, 2019, when the 116th Congress is sworn in. That’s 58 days. Jones would have to leave her role as City Council president to fill the vacant seat.

Tlaib would be the congresswoman-elect in November and begin her term on Jan. 3, 2019.

Q: Has anyone been representing the district then?

A: Nope. The residents of Michigan’s 13th District — a mostly Democratic district that includes parts of Dearborn Heights and Detroit, along with other nearby towns — hasn’t had an official representative in Congress since December 2017 and won’t until November 2018.

Q: Can the governor do that?