Rashida Tlaib made history with her swearing-in. Here's what to know about the first Palestinian-American woman to serve in Congress 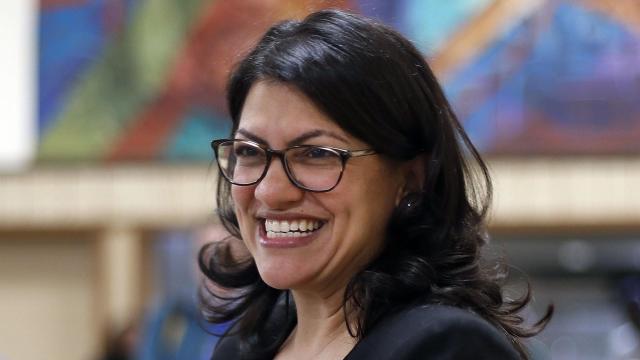 (CNN) — Rashida Tlaib likes to tell a story about how when she found out she had been elected to Congress, her 13-year-old son whispered in her ear, "See mama, bullies don't win."

"He was talking about Donald Trump," Tlaib said in a recent interview, describing in a matter-of-fact way what her oldest son Adam told her when she won her race to represent Michigan's 13th congressional district.

Tlaib will make history as the first Palestinian-American woman to serve in Congress. She and incoming Democratic Rep. Ilhan Omar of Minnesota will also be the first two Muslim women ever elected to Congress.

More than a year before she ran for Congress, Tlaib made headlines when she was thrown out of an event in Michigan where Trump was speaking after interrupting the then-Republican presidential nominee to ask if he had ever read the Constitution. She later described it as "the most American thing I could ever do."

During her campaign, Tlaib -- a member of the Democratic Socialists of America -- embraced progressive ideas like Medicare-for-all, a $15 dollar minimum wage and debt-free college as well as calls to abolish ICE and impeach the President. Just last month, she tweeted, "Can we please start the impeachment process now?"

When the new Congress gets underway, Tlaib will have a high-profile platform on Capitol Hill to confront the President and try to shape the agenda of the new House Democratic majority. The question now is what will she do when she gets to Washington?

Tlaib has broken barriers and glass ceilings before

The 42-year old has had "first" status before. She is the first of 14 children born to Palestinian immigrant parents and the first in her family to graduate from high school as well as college. She was also the first Muslim woman to serve in the Michigan state legislature.

"When I won it was just a moment of light in this time that was pretty dark for a lot of us," Tlaib said, reflecting on her election to Congress.

The 2018 midterm elections led to an "incredible array of 'firsts,'" she added, pointing to the election of other women who made history like incoming Democratic Reps. Sharice Davids and Deb Haaland, who will be the first Native American women elected to Congress.

Those victories created a sense of "hope," Tlaib said, "reminiscent of the America we want to live in."

Although she sounds optimistic about the possibility her political future holds, Tlaib also sounds anxious about the backlash that will come along with it.

"My mere existence, I realize, no matter my positions, even if I didn't say anything about any issue after I won, just complete silence from me, I would still be a target," she said, "just because I exist."

Tlaib has said she will wear a Palestinian gown called a thobe for her swearing-in ceremony and wants to be sworn in on a Quran.

The incoming congresswoman said that she has considered the possibility of using Thomas Jefferson's Quran or her own, calling the former President's Quran a "symbol," that "Islam has been part of American history for a long time."

Tlaib said that people are "taken aback" when she tells them Jefferson had a Quran. "But I like that," she said, adding, "I like that it's kind of pushing against the stereotype that somehow we're new to this country."

The decision to wear the thobe, Tlaib said, "means the world" to her mother, who she said came to the United States when she was 20 years old.

"Every child of immigrant parents knows what it means when ... their biggest hope is that they want us to succeed, but they also don't want us to lose a part of who we are," she said.

The 'challenge' of the high cost of living in Washington

In late December, Tlaib said she had not yet made any decisions about where she would live in Washington.

"I'm actually staying at a friends' house temporarily until I can get a sense of what neighborhood might work best for me," she said last month.

But Tlaib sounded frustrated by how expensive some of the available options seemed to be.

Describing some of the questions she has had to ask herself, she said, "Do I get a car? No, can't afford that. Do I live the closest to the Capitol? Well, sure I would like that, but then every time I look on Craigslist or on different kinds of websites, it's close to 2,800 dollars the closer you are to the Capitol."

"It's a challenge for me," she said, discussing housing costs in the nation's capital.

On the eve of her swearing-in to Congress, Tlaib posted a photo of herself and her two sons to Instagram with the caption "Look who came with Mama to DC. They help me stay focused on what matters most."

But although she will now be spending a lot more time in DC, Tlaib is quick to emphasize that she still considers Detroit her home.

"I've never worked in DC. I've visited and have been part of marches there, part of congressional meetings with various groups I've worked for, but I still see it as very foreign," she said.

How much will Tlaib work with or against the Democratic establishment?

Tlaib doesn't seem to be afraid of controversy -- and it's an open question how much she will end up working with or at odds with veteran Democratic lawmakers on Capitol Hill.

Not long after she won her own election, Tlaib put out a statement of support when the progressive group Justice Democrats launched a campaign to recruit progressive primary challengers to take on sitting Democratic members of Congress.

She aligned herself with a political cause far outside the Democratic mainstream when she said that she supports the controversial Boycott, Divestment and Sanctions movement targeting Israel.

Tlaib also recently told The Intercept that she wants to lead a congressional delegation to the West Bank, where her grandmother still lives.

When asked about the possibility of making the trip, Tlaib said, "When we start addressing the humanitarian needs of both Israelis and Palestinians ... when we're not thinking the other person is less than or less deserving, I really think we'll get closer to peace."

"People respect that," she said, before adding, "of course, there's haters out there."

Despite differences, Tlaib plans to back Pelosi as House Speaker

There are also signs, however, that Tlaib is willing to work with the Democratic establishment in Congress.

During her campaign, Tlaib said at one point that she would "probably not" vote for Nancy Pelosi, the long-time House Democratic leader, who is now poised to become House Speaker in the new Congress.

But Tlaib ultimately voted for Pelosi during a House Democratic election to pick a nominee for Speaker and now plans to vote for her in the final floor vote.

"I voted for her in caucus, I'm going to vote for her on the House floor," she said.

Tlaib emphasized that no alternative candidate to Pelosi ever emerged and said she had a chance to meet with the veteran Democratic leader and speak with her about her own priorities.

"I wanted to be able to be heard," she said, "sometimes that means holding to your chest that vote ... I wasn't going to walk in a room and just give that up without at least making sure that she knew poverty was an important issue to us."

When asked if she believes what she had to say resonated with Pelosi, however, Talib replied bluntly, "I don't know."